Berry fruit species are, in many countries, considered biologically and economically valuable and important species of small fruits. The aim of this work was to examine the influence of either decreased or increased mesos concentrations (MgSO4, CaCl2, and KH2PO4) on shoot multiplication of five cultivars of three small fruit species (Amelanchier alnifolia var. cusickii, Rubus fruticosus ‘Black Satin’ and ‘Loch Ness’, and Vaccinium corymbosum ‘Brigitta Blue’ and ‘Toro’). Mesos nutrients were manipulated from half to four times their base concentration. The results indicate that mesos manipulation significantly influences the number and length of shoots in most of the studied cultivars. The greatest multiplication rate for A. alnifolia was achieved with tripled mesos, whereas ‘Black Satin’ and ‘Loch Ness’ reacted positively to a lower (1–2x) concentration of mesos. Decreasing the concentration of mesos to half led to worse quality in both blackberry and Saskatoon shoots. ‘Brigitta Blue’ was more sensitive to greater mesos concentrations compared to ‘Toro’. Optimizing the mineral nutrition of plants cultivated in vitro enhances their multiplication rate and contributes to a higher production of good quality plantlets. View Full-Text
Keywords: mesos; mineral nutrition; shoot multiplication; Rubus fruticosus; Vaccinium corymbosum; Amelanchier alnifolia mesos; mineral nutrition; shoot multiplication; Rubus fruticosus; Vaccinium corymbosum; Amelanchier alnifolia
►▼ Show Figures 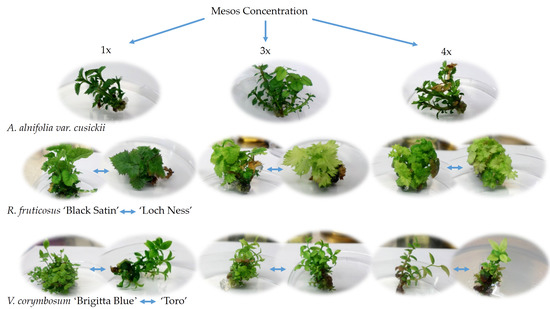