A Retrospective Study of Macropod Progressive Periodontal Disease (“Lumpy Jaw”) in Captive Macropods across Australia and Europe: Using Data from the Past to Inform Future Macropod Management
Previous Article in Journal

Can Zoos Ever Be Big Enough for Large Wild Animals? A Review Using an Expert Panel Assessment of the Psychological Priorities of the Amur Tiger (Panthera tigris altaica) as a Model Species

Specialised for the Swamp, Catered for in Captivity? A Cross-Institutional Evaluation of Captive Husbandry for Two Species of Lechwe

Lechwe are social antelope adapted to wetland environments that can perform a ritualised courtship display. Although commonly housed in zoos, there is little published information available to guide their management. This study aimed to understand current husbandry practice for southern and Nile lechwe housed in North American and European institutions. A survey was sent to holders of these species, with questions addressing group demographics, enclosure characteristics, diet, enrichment, and occurrence of abnormal behaviours. Results showed that captive lechwe herds consisted of a similar ratio of male to females compared to wild herds, but there may be a limit to the number of male animals available to females at any one time. Lechwe enclosures typically featured wetland areas but these were rarely managed and there were often limited areas of vegetation for cover. The diets provided to lechwe differed when compared to existing husbandry guidelines but did not significantly differ between sampled zoos (in terms of ingredients commonly used). Abnormal behaviours were reported at several zoos but no specific causal factor was identified. This research provides a starting point for further study of the husbandry requirements of these specialised ungulates and considers the role of ecological information to the management of captive wild animals.

Lechwe are specialised wetland antelope that can have a strict social hierarchy or perform lekking during breeding. The southern lechwe (Kobus leche) and the Nile lechwe (K. megaceros) are both found in zoos globally, but little research is available to support husbandry decisions. The aim of this research was to investigate current housing and husbandry used for these lechwe across North American and European zoos. A survey was distributed to holders in 2018 and information on 33 herds (18 Nile and 15 southern) was collected. The survey focussed on population demographics, enclosure size, biologically relevant exhibit features, mixed-species holdings, nutrition, use of environmental enrichment and performance of abnormal repetitive behaviours. Results showed that lechwe were housed in herds with similar sex ratios to wild counterparts but with a potential lack of opportunity to lek. Many zoos provided wetland, but this was rarely actively managed, and not all zoos provided cover for hiding and retreat. Current feeding practice differed significantly compared to available antelope husbandry guidelines. No consistency in amounts of pellet, forage or produce provided to lechwe across institutions was found. Abnormal repetitive behaviour was noted by several zoos, but no significant predictor of such behaviour could be identified. Despite some identifiable recognition of ecology informing lechwe management, it is important that evidence-based husbandry decisions are made based on a species’ evolutionary pathway and ecological needs and some fundamental features of lechwe husbandry do not always correlate with the adaptive traits of a specialised wetland ungulate. View Full-Text
Keywords: Kobus leche; Kobus megaceros; evidence-based practice; zoo husbandry; antelope Kobus leche; Kobus megaceros; evidence-based practice; zoo husbandry; antelope
►▼ Show Figures 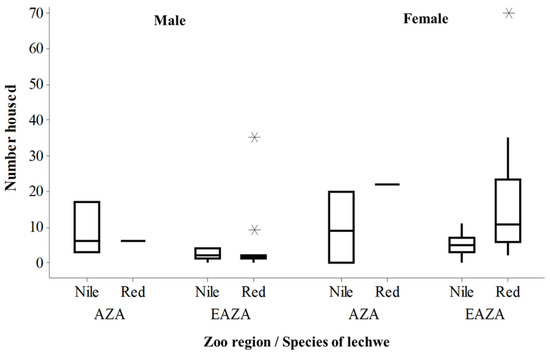