Article
Mechanical and Durability Properties of Green Star Concretes
by

Concrete is the most widely used construction materials in the world. Ordinary Portland cement (OPC) and aggregates are the important ingredients for concrete, where the former when mixed with water forms matrix which bind the aggregates and the latter contributes to the volume of the concrete. Ordinary concrete is not environmental friendly due to energy intensive manufacturing of OPC. It is reported that manufacturing of OPC contributes between 5 and 7% of global CO2 emission and about one ton of CO2 is released to produce the equal amount of OPC [1,2,3]. On the other hand, the aggregates which are sourced from various natural sources (e.g., river beds, rocks, sand dunes, etc.) also affects the natural eco-system. As a result, significant efforts are being directed to reduce the amount of OPC and natural aggregates in concrete to reduce the adverse impact on the environment. Significant research are also conducted to reduce the carbon footprint of concrete by partially replacing OPC and natural aggregates using various supplementary cementitious materials (SCMs) and recycled aggregates, respectively [4,5,6,7,8,9]. Among various SCMs fly ash, slag and silica fume, which are industrial by-products, are most widely used in concrete as partial replacement OPC. Recycled aggregates are sourced from crushed demolished concrete structures and are used as partial replacement of natural aggregates in concrete. A very good level of understanding exists on various properties of concretes containing SCMs and recycled aggregates either individually or combined through significant amount of research [10,11,12,13,14,15,16].
On the other hand, huge amount of tap water is used for washing activities in ready mix concrete plants. It is reported that about 500–1500 litres of tap water is used to wash one concrete mixer truck in the ready mix concrete plant [17]. Therefore, huge amount of clean water is being used in the concrete mixing plants. The reusing of this wash water in concrete mixing is the most sustainable way of reducing the use of clean tap water in concrete mixing facilities. Generally, the wash water from concrete mixing plants contains mostly cementitious fines and few chemicals from the use of superplasticizers, which are not different from the ingredients of concrete [17]. In a number of studies the effect of wash water and recycled water on the properties of concretes are studied and all are on concrete containing natural aggregates and OPC as the main binder [17,18,19].
Energy efficiency of buildings is another important requirement for asset owners, builders as well as the building regulators in many countries. Generally, the reduction of heating and cooling energy of buildings are the main objective in the design of energy efficient building. In one estimate it is found that built environment is world’s single largest contributor of greenhouse gas and consumes about a third of water and generates 40% of wastes (Green Building Council Australia (GBCA)). To promote the environmental efficiency of buildings “green star” rating is introduced in many countries including in Australia, which is an internationally-recognized sustainability rating system for buildings. Among various green star points, up to three points are allocated for concrete. According to green building council of Australia [20] up to “two green star” points can be awarded to the concrete containing 40% SCMs as partial replacement of OPC, while up to “three green star” points can be awarded to concrete containing 40% SCMs as partial replacement of OPC, 40% recycled materials as partial replacement of natural aggregates and 50% reclaimed water as partial replacement of tap/drinking water. The above incentive encourages the promotion of environmentally friendly concrete in the construction of buildings.
Significant research has been devoted to study the properties of concrete containing partial replacement of OPC using various SCMs of various quantities and partial replacement of natural aggregates using various amounts of recycled concrete aggregates separately as well as their combined used. No study so far reported the properties of green star concretes where industrial by-products, recycled materials and reclaimed wash water are used together. This research presents the first study of this kind where mechanical and durability properties of green star concretes are studied and compared with control concrete containing 100% OPC, natural aggregates and fresh water.

In this study four series of mixes were considered. The first series was control concrete consisting of 100% OPC, 100% natural aggregates and 100% tap water. The second series was “two green star concrete” contained 40% slag (a by-product of steel industry) as partial replacement of OPC, while the rest of the materials were similar to the first series. The third series was similar to the second series except where 40% natural coarse aggregate (NCA) was replaced by recycled coarse aggregates (RCA) that were sourced from construction and demolition wastes. The fourth series was “three green star concrete” which was similar to the third series except where 50% fresh water was replaced by reclaimed wash water collected from the concrete laboratory. The fourth series was between two and three green star concrete and was considered to study the effect of 50% reclaimed wash water on the properties of three green star concrete. The mix proportions of all concretes are shown in Table 1. The percentage replacements of NCA by RCA and OPC by slag were on the basis of weight. The water/binder ratio was kept constant at 0.45 in all mixes. In all three types of green star concretes as well as control concrete mechanical properties in terms of compressive strength, elastic modulus and indirect tensile strength and durability properties in terms of sorptivity, water absorption and chloride permeability were measured at 7 and 28 days.

Ordinary Portland cement (OPC) was used in all concrete mixes. The blast furnace slag used in this study was obtained from a local supplier. The properties and chemical compositions of OPC and slag are shown in Table 2. The recycled coarse aggregate was obtained from a local construction and demolition (C&D) waste recycling plant in Perth, Western Australia. Figure 1 shows the analysis of 5 kg sample of the C&D waste used as RCA in this study. The percentages are based on mass. It can be seen that approximately 69% are from concrete and the rest consisted of limestone, masonry, etc. Table 3 shows the properties of recycled and natural aggregates. Sieve analysis of RCA is also conducted and about 23% were 20 mm size and 75% were 10 mm size. The natural coarse aggregates (NCA) used in this study were mixture of 10 mm and 20 mm sizes coarse aggregates at a ratio of 1:2. The NCA and RCA used in this study were in saturated and surface dry condition before used in the mixing. Chemical analysis of tap water and reclaimed wash water in concrete laboratory is shown in Table 4. It can be seen that the pH level of wash water is higher than that of tap water, while the turbidity of the wash water is much higher than the recommended limit for drinking water (5 NTU (Nephelometric Turbidity Unit)) by World health organization [21]. The higher turbidity in wash water can be attributed to various cementitious materials, superplasticizers and alkali chemicals used in the laboratory for the production of concrete and other cementitious materials.

The compressive strength, indirect tensile strength, elastic modulus, water absorption, water sorptivity and chloride ion permeability were measured at 7 and 28 days for all mixes. At least three specimens were cast and tested in each series for each property measured in this study. All specimens were water cured until the day before the test date. The compressive strength and elastic modulus tests were carried out on 100ø × 200 mm cylinders and the indirect tensile strength was determined on 150ø × 300 mm cylinders. The water absorption, water sorptivity and chloride ion permeability tests were conducted on 100ø × 50 mm thick specimens, which were made by cutting the standard 100ø × 200 mm cylinders. The compressive strength, indirect tensile strength and elastic modulus were measured according to the Australian standards AS1012.9 [22], AS1012.10 [23] and AS1012.17 [24], respectively. The concrete cylinders for the compressive strength and modulus of elasticity were sulphur capped to ensure a smooth surface. A MCC8 3000kN capacity machine was used to test the compressive strength and indirect tensile strength of all concrete samples. In the determination of modulus of elasticity a DMG/Rubicon 2500kN Universal Testing Machine was used to apply a constant load rate up to 40% of the ultimate load of respective concrete mix, while two linear variable differential transducers (LVDT) were used as shown in Figure 2 to measure the axial deformation of the cylinder. The slope of the recorded stress vs strain curve yielded the elastic modulus of the concrete.
The rate of water absorption (sorptivity) of concrete samples was measured according to ASTM C1585 [25]. The principle of the method is that a specimen had one surface in free contact with water (no more than 5 mm above the base of the specimen) while the other sides were sealed. This test determined the rate of absorption of water by hydraulic cement concrete by measuring the increase in the mass of a specimen resulting from absorption of water as a function of time. In this study the mass of the concrete specimen was measured regularly to determine the initial absorption from 1 min to the first 6 hours. The absorption I was the change in mass divided by the product of the cross-sectional area of the test specimen and the density of water. The initial rate of water absorption value (mm/sec1/2) was calculated as the slope of the line that is the best fit to I plotted against the square root of time (sec1/2). The chloride ion penetration resistance of concrete, popularly called the rapid chloride permeability test (RCPT), was conducted according to ASTM C1202 [26], details of which can be found in the standard. Water absorption of all concretes were measured according to the Australian standard AS1012.21 [27].

This study evaluated mechanical and durability properties of green star concretes according to the definition of green building council Australia and bench marked with control concrete. Within limited studies the following conclusions can be drawn:
While only slag and concrete wash water are used to partially replace the OPC and tap water, respectively in the green star concretes in this study, other SCMs. E.g., fly ash, silica fume, combination of fly ash/slag/silica fume and recycled water from other sources can be used in green star concretes and studied their properties to establish their use.

Author acknowledge to two final year project students Brett Milman and Miss Aije for their assistance in casting and testing of all concrete specimens in this study. 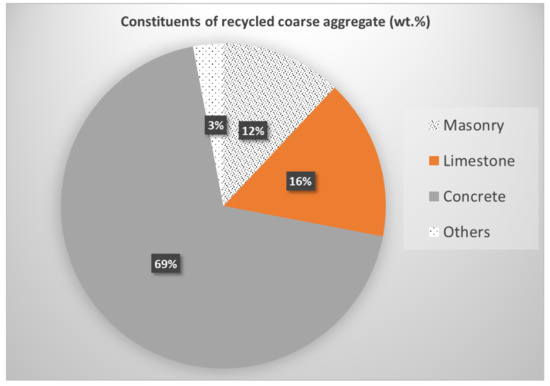 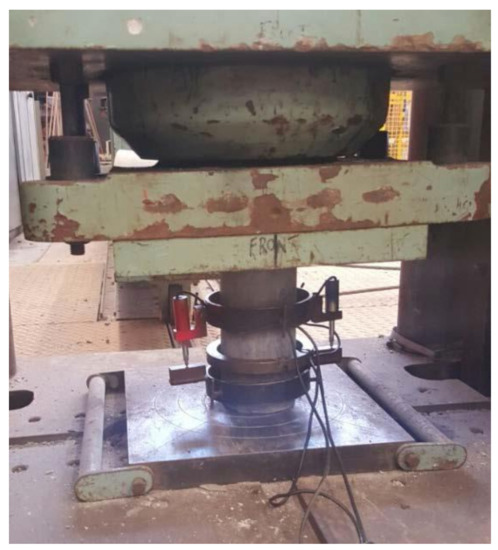 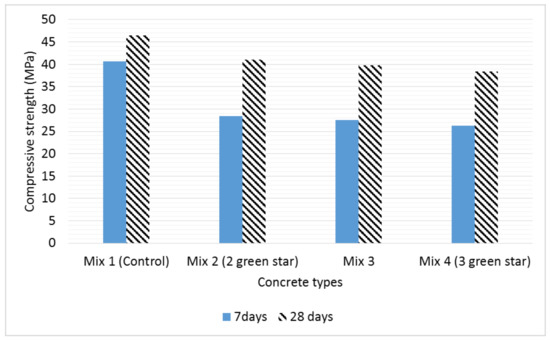 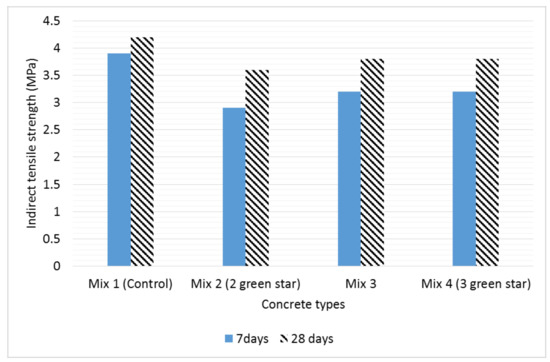 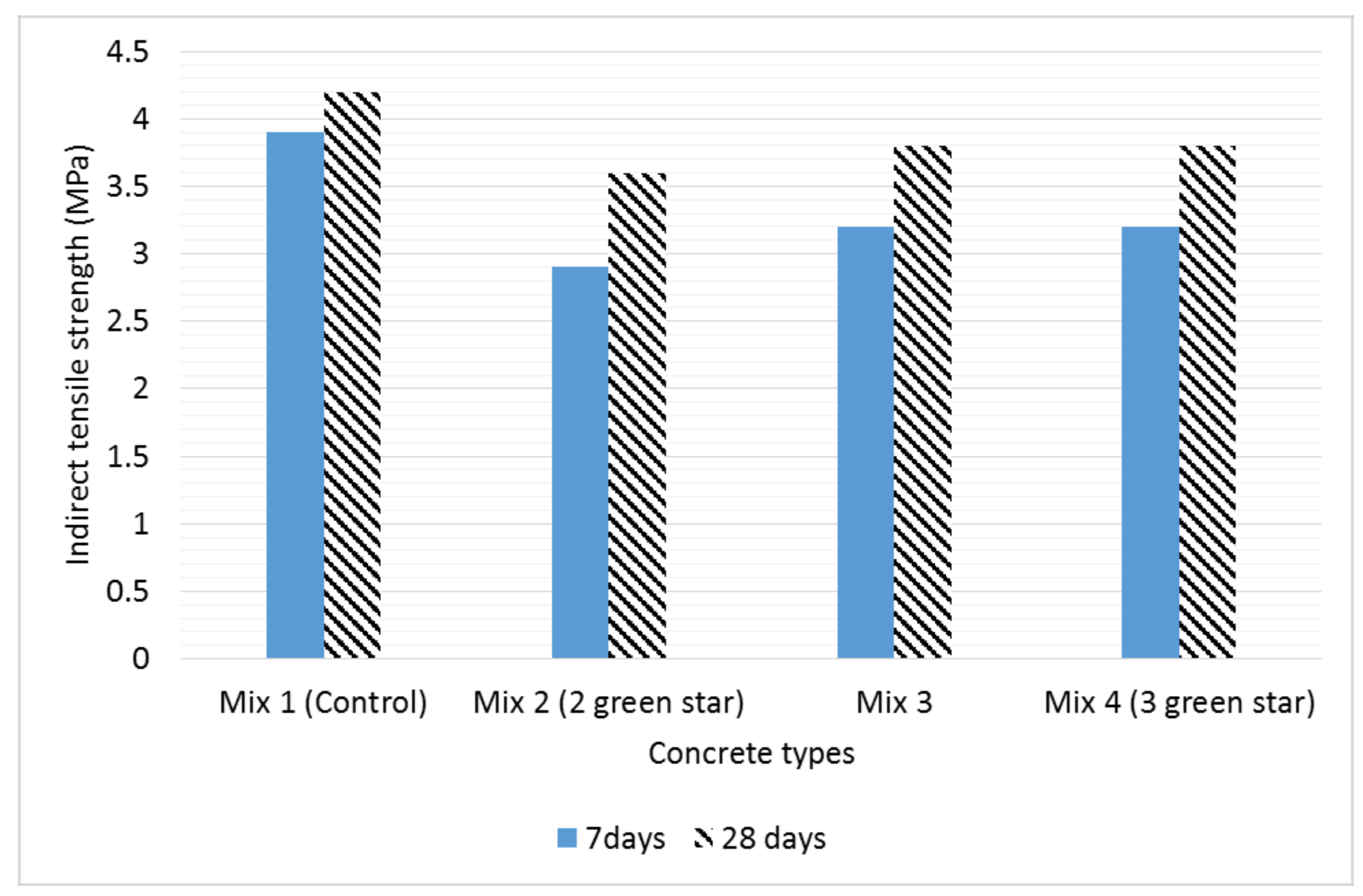 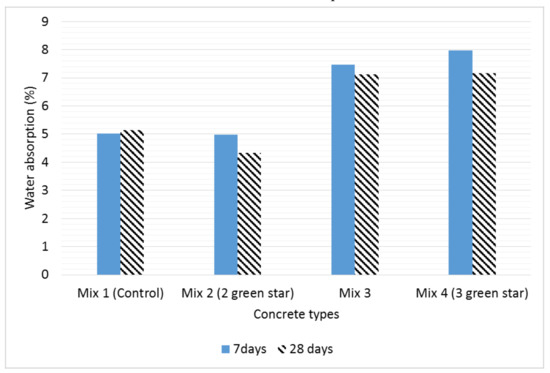 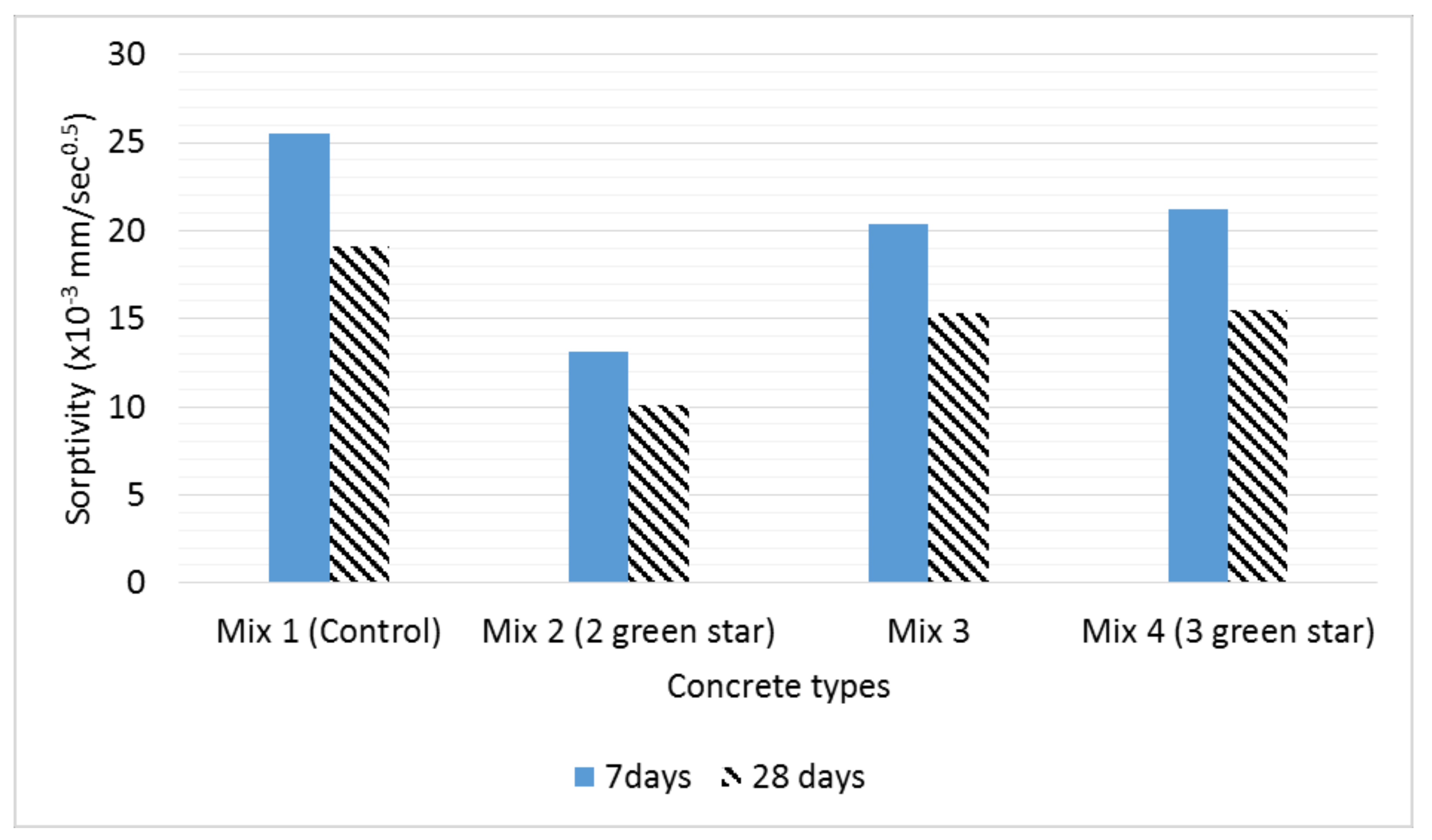