:
Modeling of irrigation and agricultural drainage requires knowledge of the soil hydraulic properties. However, uncertainty in the direct measurement of the saturation moisture content () has been generated in several methodologies for its estimation, such as Pedotransfer Functions (PTFs) and Artificial Neuronal Networks (ANNs). In this work, eight different PTFs were developed for the () estimation, which relate to the proportion of sand and clay, bulk density (BD) as well as the saturated hydraulic conductivity (). In addition, ANNs were developed with different combinations of input and hidden layers for the estimation of . The results showed R values from for the eight different PTFs, while with the ANNs, values of R were obtained. Finally, the root-mean-square error (RMSE) was obtained for each ANN configuration, with results ranging from . It was found that with particular soil characteristic parameters (% Clay, % Silt, % Sand, BD and ), accurate estimate of is obtained. With the development of these models (PTFs and ANNs), high R values were obtained for 10 of the 12 textural classes.
Keywords:
soil hydraulic properties; artificial intelligence; soil water content; deficit irrigation

The database used in this study was developed from samplings in 900 plots in the Irrigation District 023 located between the municipalities of San Juan del Rio and Pedro Escobedo in the state of Queretaro, Mexico and has an area of 11,048 ha.
The bulk density was determined by the cylinder method of known volume, the soil texture by the mesh analysis and the Bouyoucos hydrometer [46], the initial water content through a TDR 300 soil moisture meter, and field capacity (−33 kPa) and permanent wilting point (−1500 kPa) were measured in a pressure plate [47], while was obtained by the variable head permeameter method. The measurement of variables and the hydrodynamic characterization of soils are widely discussed in [48,49].

Soil texture is an indicator of the amount of water that soil can store and, consequently, the irrigation interval with which crops must be watered. Figure 3 shows the texture classification obtained from the laboratory and classified according to the triangle of textures proposed by the USDA using the R package “soil texture” [50]. This texture is determined by the proportion of sand, silt and clay and according to the triangle.

The PTFs’ confiability depends on factors that were not considered as predictors, such as the soil characteristics, climatic conditions, landscape characteristics and geographical regions of the soils.
The most used statistic indicators to evaluate the goodness of fit of the PTFs are the root-mean-square error (RMSE), the mean error (ME) and the correlation coefficient (R) [51,52]. where is the value measured in the field, is the estimated value, is the measured values’ mean, i is the i-th value of the measured or estimated data and N is the total number of data points for each soil sample.
The small and homogeneous databases tend to produce better error metrics (RMSE, ME, R) than bigger databases, which include a significant variability in the soil type, porosity and texture [53].

2.4. Development of the PTFs and the ANNs

Based on the study of Trejo-Alonso et al. [54], eight new PTFs were developed based on the results of a Principal Component Analysis (PCA). This decision was made due to the fact that only the PTF published by Vereecken et al. [36] could be tested and the lack of PTFs for in the literature.
For the new PTFs, we shouldonly consider the next variables from the database: % Clay, % Sand, BD and . The PTFs and the plots in this work were constructed using R software [55], and 450 random values are used for calibration and 450 for validation.
For the ANNs, the “neuralnet” package [56] and the “caret” package [57], provided by the R software, were used with 75% of the sample for training and 25% for validation. Two different ANNs were constructed, the first one with four input data points (% Clay, % Silt, BD and ) and the second one with five input data points (% Clay, % Silt, % Sand, BD and ). Two hidden layers were maintained in both ANNs, and the number of neurons in each layer varies from 2 to 10. This process led to 81 ANN configurations and, finally, the two best configurations were selected.

The dominating soil texture in this region is SiClLo (18.11%), followed by SiLo (16.11%) which can be observed in Figure 3. With the determination of this soil property, it is possible to detect plots where irrigation depths and irrigation times were excessive [28].
Figure 4 shows the new PTFs constructed in this study, and Table 2 shows the mathematical expressions. Models with silt percentage data were tested too, but with worse or very similar results. This was already indicated by the PCA analysis.

The best configuration for the ANN with four input layers was 4-9-10-1, which means four inputs, nine neurons in the first hidden layer, ten neurons in the second hidden layer and one output. For the five input layers, a 5-10-10-1 configuration was implemented. The main results of these two ANNs are summarized in Table 3. The results obtained provided high R, which could be considered satisfactory when compared to other studies [2,36,37].
Figure 5 shows the main results of the ANN constructions process. Figure 6 shows the ANN implementation in the validation data.

In this work, it has been proved that ANNs are more precise than PTFs in the modeling with better values in R even with the most simple ANN (four input parameters).
Furthermore, for comparative purposes, the results obtained with the studies mentioned in Table 2 were analyzed. Hodnett and Tomasella [2] found values from 0.4100 to 0.6010 cm/cm; meanwhile, the sample values here obtained ranged from 0.3500 to 0.5500 cm/cm. This difference is explained by the fact that the soil samples used in this study come from cultivated areas and cover 10 of 12 textural classes. In addition, Hodnett and Tomasella [2] used six input parameters and only linear relations for the PTF construction, and the R or RMSE information was missing. In this work, only four parameters were used for the more complex calculated TFP, and nonlinear relationships were constructed. In this case, no data on organic matter content were available; therefore, it was not possible to test the PTF found by Hodnet and Tomasella [2]. Vereecken et al. [36] used 182 samples from the north of the Samber and Meuse rivers, Belgium, in which they concluded that can be estimated with two soil properties (bulk density and clay content), obtaining an R. Finally, Wösten et al. [37] used the HYPRES database, which contains information on a total of 5521 soil horizons, to create a PTF of from only 4030 soil horizons, including six input variables, where horizon depth stands out as a quantitative variable. However, even having used all this information, they obtained an R due to the absence of some hydraulic properties such as . Despite exploring nonlinear forms for PTFs, the result found by Vereecken et al. [36] present the same problem as Wösten et al. [37], where both use bulk density and clay content as input data; R is observed.
Therefore, eight new PTFs were found that proved to be more accurate compared to those found in the literature for the calculation of . The models here developed present the advantage of having a high value of R and the characteristic of only requiring three primary soil variables as the input parameter, which are clay and sand content, as well as in two of the eight functions or BD in three of the eight functions developed.
Furthermore, with the development of ANNs with the same four input parameters, it is shown that the error obtained in the PTFs can be reduced.
The development of PTFs is a useful tool that can be applied mainly in irrigation (sprinkler, drip or surface), as well as in agricultural drainage, to estimate soil parameters that are difficult to access. They are easy to evaluate and depend on the number of variables to be applied. However, ANN is an alternative when a more accurate approximation is sought, as long as computer equipment (hardware and software) is not a disadvantage.

In this work, eight new PTFs were developed for estimation, considering the clay and sand content (%), BD (g/cm) and the (cm/h), based on 900 samples. The results showed, for PTFs, R, reaching a maximum value of R, where only three input parameters were used. These functions can be used to offer a quick response in the irrigation modeling and drainage, but with a high capacity of improvement to obtain an optimal design.
Further, 81 artificial neural networks were constructed and tested to calculate the , based on the best RMSE values. Two of them were selected as the final ANNs, the first one with four input data and the second one with five. The results showed R, which suggests that the use of the ANN is necessary to develop more accurate designs in the irrigation models, which show better results in the final parameter estimations.

J.T.-A., S.F., N.M.-D. and C.C. contributed equally to this work. All authors have read and agreed to the published version of the manuscript.

This research was supported as part of a collaboration between the National Water Commission (CONAGUA, according to its Spanish acronym); the Irrigation District 023, San Juan del Rio, Queretaro; and the Autonomous University of Queretaro, under the program RIGRAT 2015–2019.

We would like to thank the academic editor and the expert reviewers for their detailed comments and suggestions for the manuscript. These were very helpful in improving the quality of the manuscript. 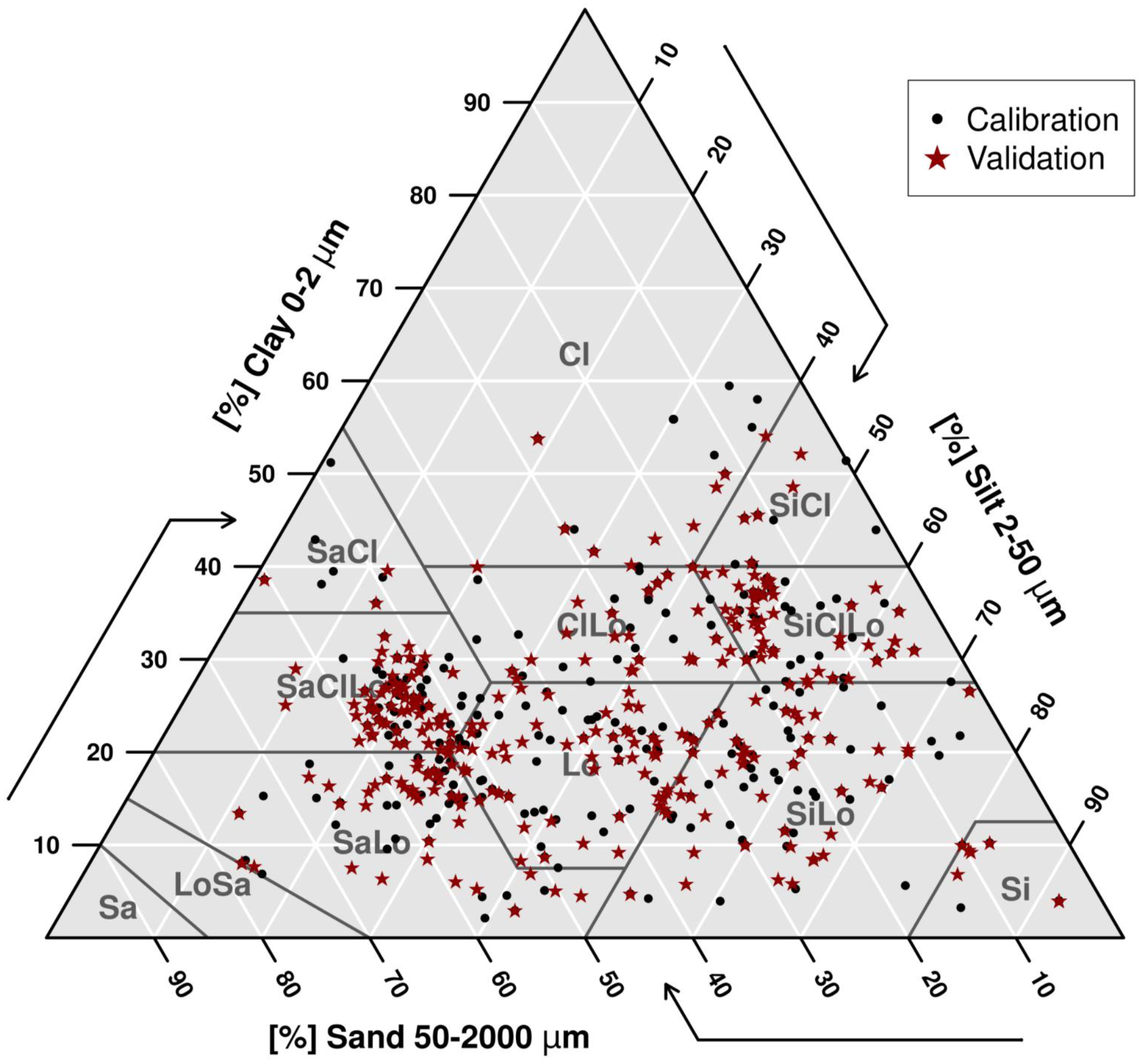