Evaluation of the Effectiveness of the SED-BIO System in Reducing the Inflow of Selected Physical, Chemical and Biological Pollutants to a Lake
Next Article in Special Issue

Longitudinal Chemical Gradients and the Functional Responses of Nutrients, Organic Matter, and Other Parameters to the Land Use Pattern and Monsoon Intensity

River water quality degradation is one of the hottest environmental issues worldwide. Therefore, monitoring water quality longitudinally and temporally is crucial for effective water management and contamination control. The main aim of this study was to assess the longitudinal variations in water quality in the mainstream of the Han River, Korea, from 2015 to 2019. The trophic state classification (TSC), microbial pollution indicator (MPI), and river pollution index (RPI) were calculated to characterize river water quality and revealed more serious pollution toward the downstream zone (Dz) due to agricultural and urban-dominated areas. The biodegradability index (BI) indicated that non-biodegradable organic pollutants are increasing in the water body from the urban and animal wastewater treatment plants. Nutrients, organic matter contents, total suspended solids, ionic factors, and algal chlorophyll were higher in the Dz than in any other zones and were markedly influenced by the summer monsoon. Empirical analysis showed that nutrients and organic matter had positive linear functional relations with agricultural and urban coverage and negative linear relations with forest coverage. The pollutant-transport function suggested that suspended solids act as TP and TN carriers. Regression analysis indicated that TP (R2 = 0.47) has more positive functional relations with algal growth than TN (R2 = 0.22). Our findings suggest that a combination of empirical models and pollution indices might be utilized to assess river water quality and that the resulting information could aid policymakers in managing the Han River. View Full-Text
Keywords: Han River; land use pattern; nutrient; organic matter; water quality Han River; land use pattern; nutrient; organic matter; water quality
►▼ Show Figures 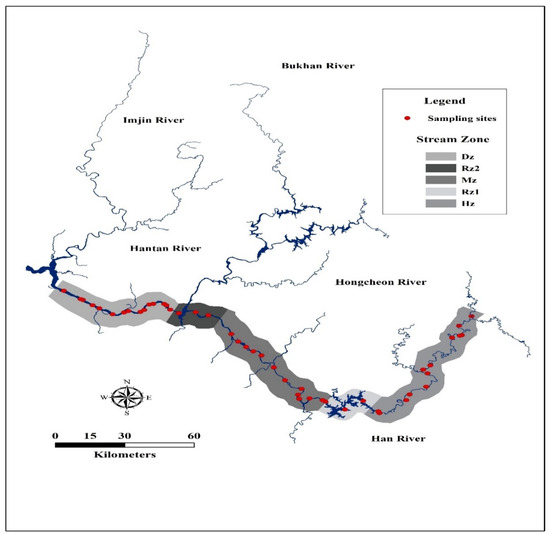