Until 2021, the genus Aurelia contained eleven described species (WoRMS, 2020), with many genetic species still awaiting a formal description. In 2021, ten new species of Aurelia were described almost solely from genetic data in a novel attempt to use genetic characters as diagnostic characters for species descriptions, leaving seven genetic species still undescribed. Here we present the description of a new Aurelia species from the Adriatic Sea using an integrative taxonomy approach, i.e., employing molecular as well as morphological characteristics in order to describe this new Aurelia species. The species is described based on a single medusa sampled from the town of Rovinj (Croatia), North Adriatic, amidst combined blooms of the ctenophore Mnemiopsis leidy and cnidarian Aurelia solida in the summer of 2020. Based on genetic data, the newly described Aurelia pseudosolida sp. nov. has never been sequenced in any of the previous investigations of the molecular diversity of Aurelia. This is the second species belonging to Discomedusae described from the North Adriatic in little more than half a decade, which could be yet another indication of the susceptibility of the North Adriatic to proliferation of non-indigenous gelatinous species, especially if we take into account historical as well as recent blooms of suspected non-indigenous gelatinous species such as Muggiaea atlantica, Aurelia solida, Mawia benovici and Mnemiopsis leidy. View Full-Text
Keywords: Adriatic Sea; Aurelia pseudosolida; Aurelia solida; Mnemiopsis leidy; integrative taxonomy; gelatinous zooplankton; zooplankton bloom Adriatic Sea; Aurelia pseudosolida; Aurelia solida; Mnemiopsis leidy; integrative taxonomy; gelatinous zooplankton; zooplankton bloom
►▼ Show Figures 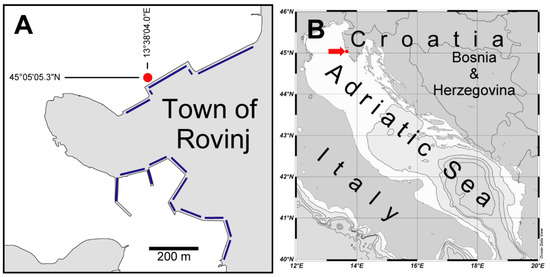