The Bragg resonant reflection of porous submerged breakwaters was measured using the wave flume (70 m long, 1.2 m wide, and 1.7 m deep) at the Zhejiang Institute of Hydraulics and Estuary. The flume was equipped with a servo motor to generate regular and irregular waves with different wave spectra, while a porous wave absorber with a slope of 1:7, composed of grids and floating foam plates was installed at the end of the flume to absorb the incident wave energy. The porous bars composed of steel wire mesh and filler blocks were fixed in the test section of the flume. Furthermore, the DJ 800 sensor data acquisition system developed by the Chinese Institute of Water Resources and Hydropower Research was used to measure the wave parameters. The water surface elevations around the bars were measured by implementing six capacitance wave gauges, identified as WG.1–6, as shown in Figure 2. The method that Goda and Suzuki [39] proposed was applied to separate the incident and reflected waves. The spacing between WG.1 and WG.2 was set to 0.2 m, and the spacing between WG.2 and WG.3 was set to 0.3 m. The typical time histories of the free surface elevations are shown in Figure 3, where the stable surface elevations are between T1 and T2. The sampling interval of the wave gauges was 0.02 s, and each sampling time was 81.92 s. In order to ensure the reliability of the experiment, these gauges were calibrated in a small water tank before the tests and each case was repeated three times, after which the average values of the results were taken.
The spacing between the submerged breakwaters with rectangular, triangular, and trapezoidal sections was set to 1m, which were composed of prefabricated alloy cages and different fillers, as shown in Figure 4, Figure 5 and Figure 6. The alloy cage frame was made of aluminum, and the specific parameters are shown in Figure 7 and Table 1, where h is the water depth, B is the bar width, B0 is the short bottom edge of the trapezoidal bars, D is the bar height, and S is the spacing of the two adjacent bars.
The permeability of the porous submerged breakwaters was determined by applying the drainage method [40]. In order to reduce the measured error resulting from the fillers, they were soaked in water for more than 5 h before measurement. At first, an appropriate amount of water was added into the container, and the volume was recorded as V1. Next, the fillers were put into the container so they were flush with the water surface, and the volume was recorded as V2. Then, the permeability of the porous submerged breakwaters φ can be expressed as
φ = V1/V2
where V1 is the volume of water in the initial state in cubic centimeters (cm3), and V2 is the total volume of the filler flush with the water surface in cubic centimeters (cm3).
Finally, the permeability of filler A was 68.85%, filler B was 49.81%, and filler C was 31.26%, as shown in Table 2.

The regular wave was employed as the incident wave for this experiment, and the water depth h, wave period T, and wave height H were the main parameters controlling wave making. The wave height was 0.04 m, and the water depth was 0.25 m, 0.30 m, and 0.40 m, respectively. The wave period T varied with the ratio of twice the distance between the adjacent submerged breakwaters to the wavelength is 2 S/L, and 2 S/L is equal to 0.80, 0.86, 0.91, 0.94, 0.97, 1.00, 1.04, 1.12, and 1.21. The main factors affecting the Bragg resonant reflection are the permeability, height, width, spacing, section shape, and number of submerged breakwaters. In this study, the number of bars N was fixed at 4, and the effects of permeability φ, relative width B/S, relative height D/h, and section shapes on the Bragg resonant reflection were investigated respectively, as shown in Table 3.

It is widely known that Bragg reflection will occur when the ratio of double submerged breakwaters spaced to wavelength 2 S/L is near an integral multiple [14,15]. Therefore, this phenomenon and the change in reflectivity are discussed using the parameter 2 S/L. This part analyzes the correlation between φ, B/S, D/h, section shapes, and the wave reflection coefficient KR, which is expressed by the ratio of the amplitude of the reflected wave to that of the incident wave.

3.2. Influence of the Relative Width on Bragg Resonant Reflection

3.3. Influence of the Relative Height on Bragg Resonant Reflection

3.4. Influence of Section Shapes of Bars on Bragg Resonant Reflection

Conceptualization, methodology, validation, formal analysis, writing—original draft preparation, W.X.; investigation, Z.W. and J.F.; writing—review and editing, M.H.H. and M.S.I.S.; supervision and funding acquisition, C.C., A.T. and D.J. All authors have read and agreed to the published version of the manuscript.

This research was funded by the National Key Research and Development Program of China (grant Nos. 2022YFE0104500 and 2020YFD0900701) and the Research Project on Representative Islands Platform for Resources, Ecology, and Sustainable Development (grant Nos. 2029999 and 220005).

The authors thank the anonymous reviewers for their constructive comments. 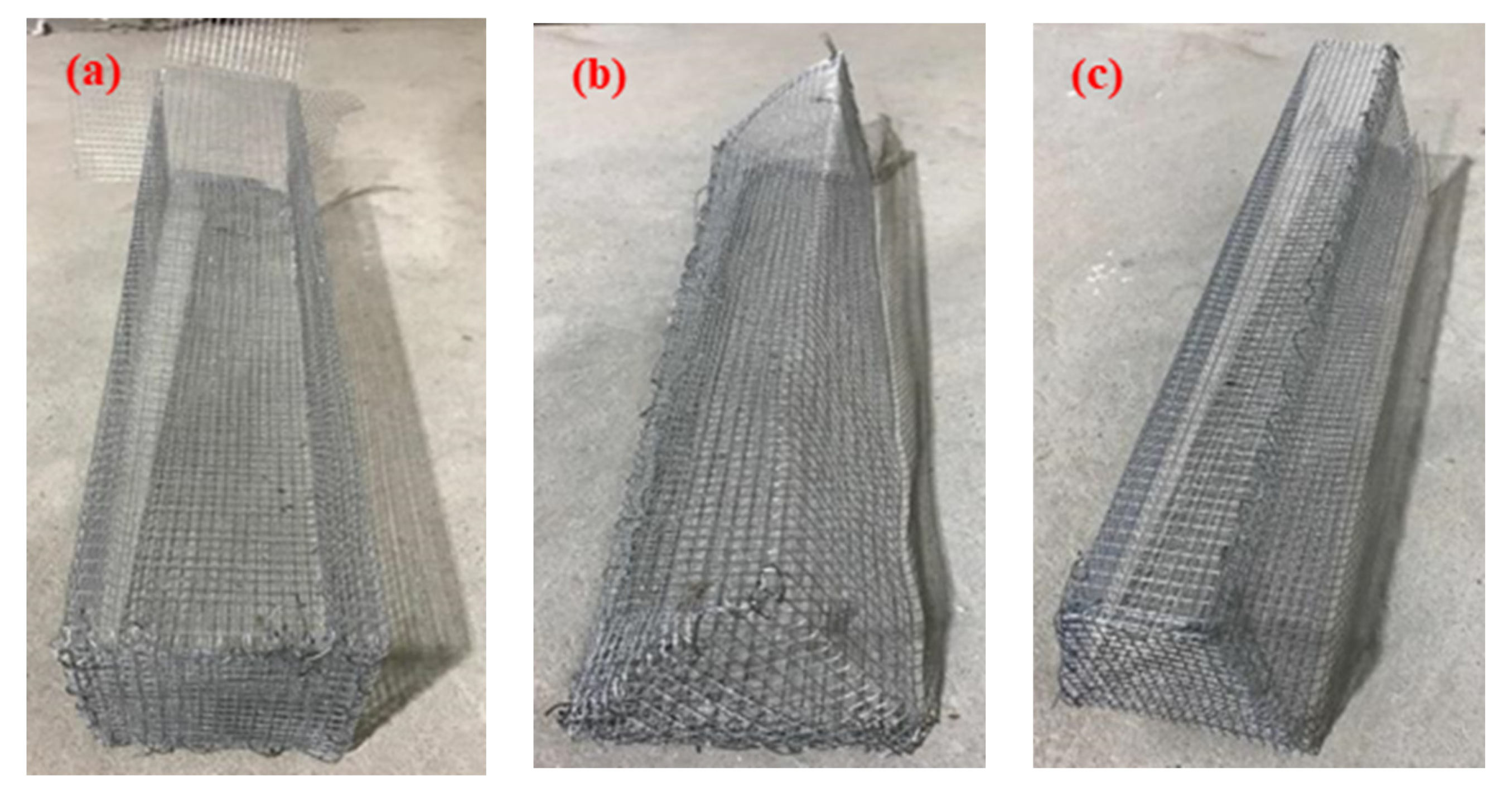 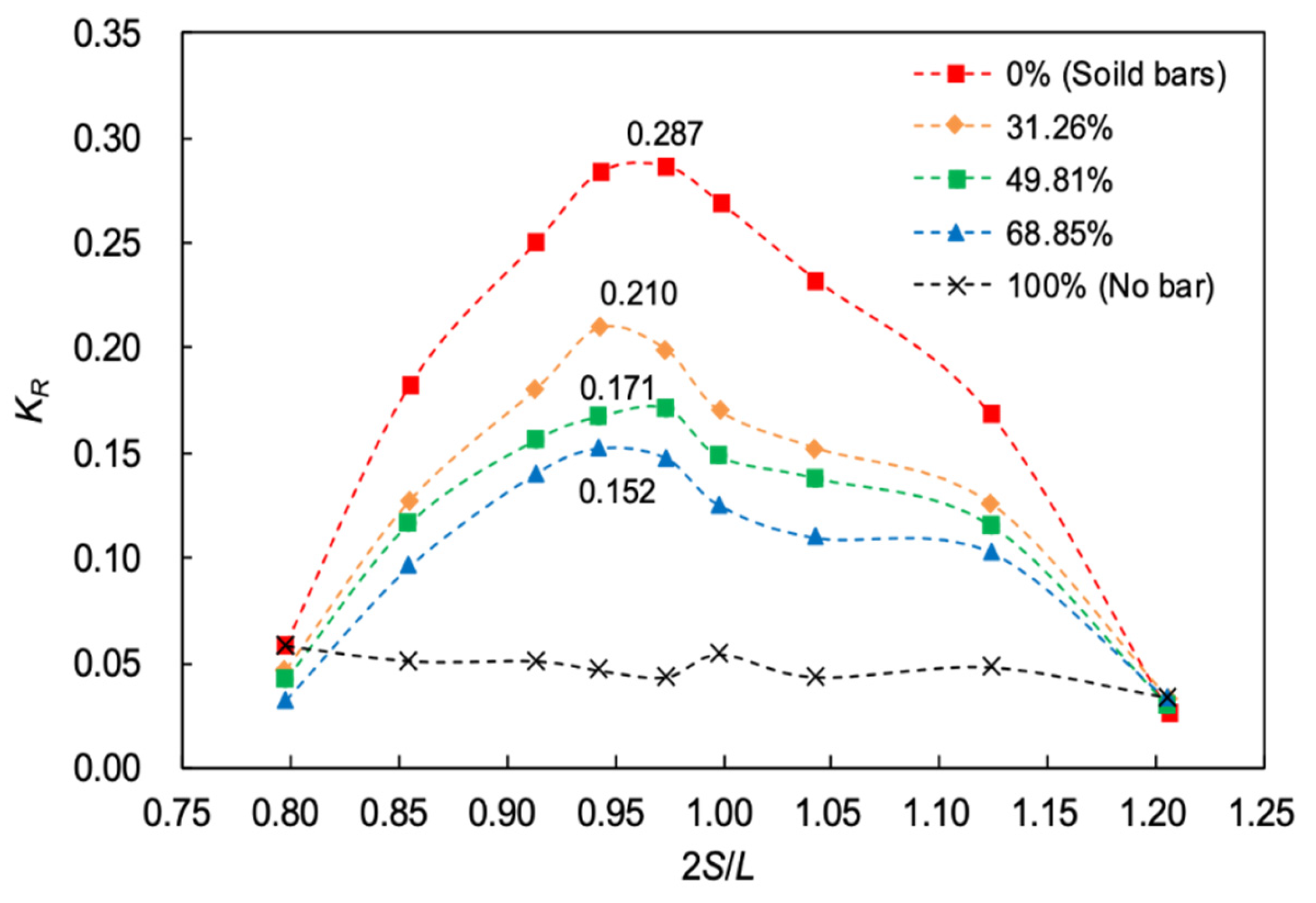 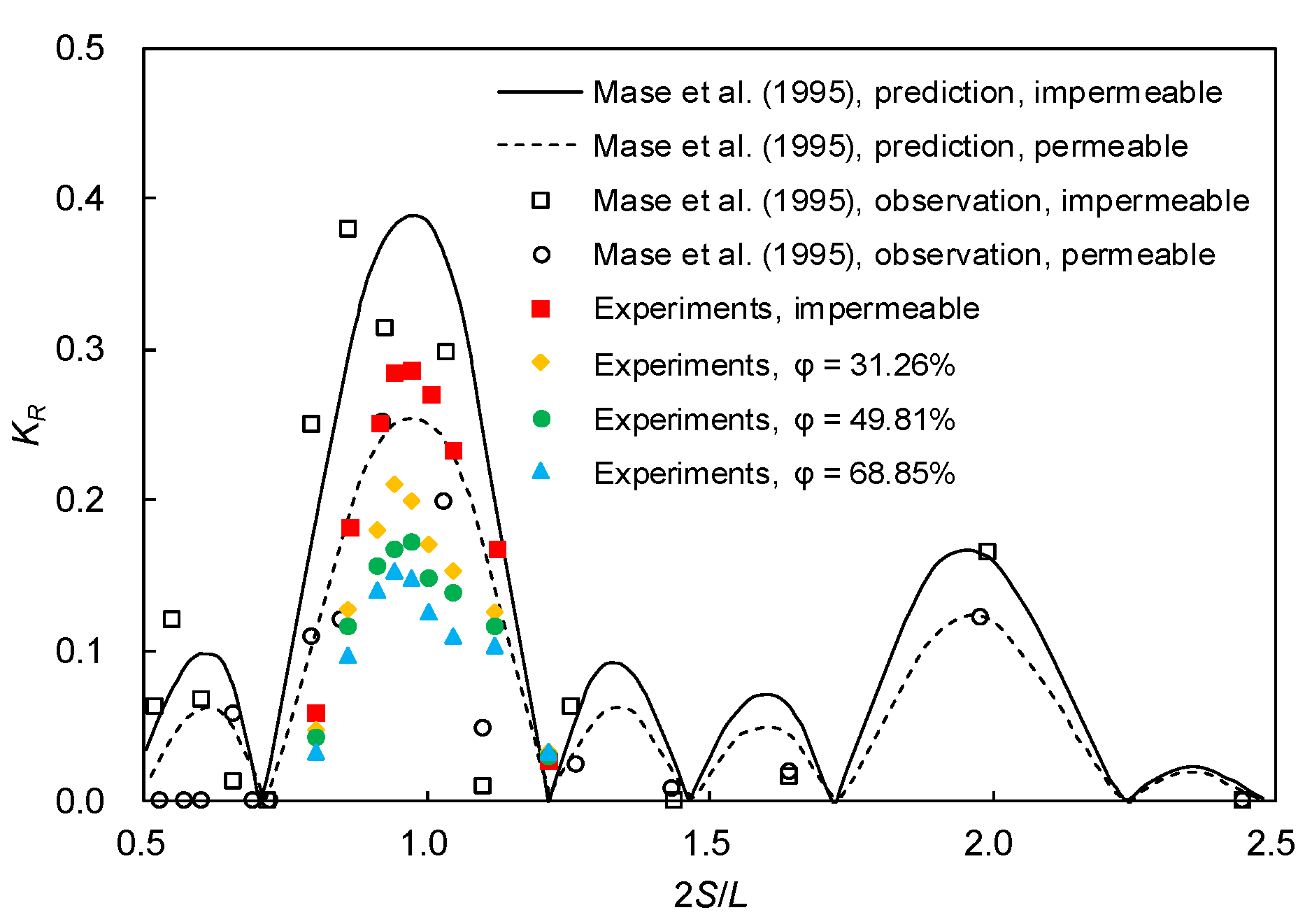 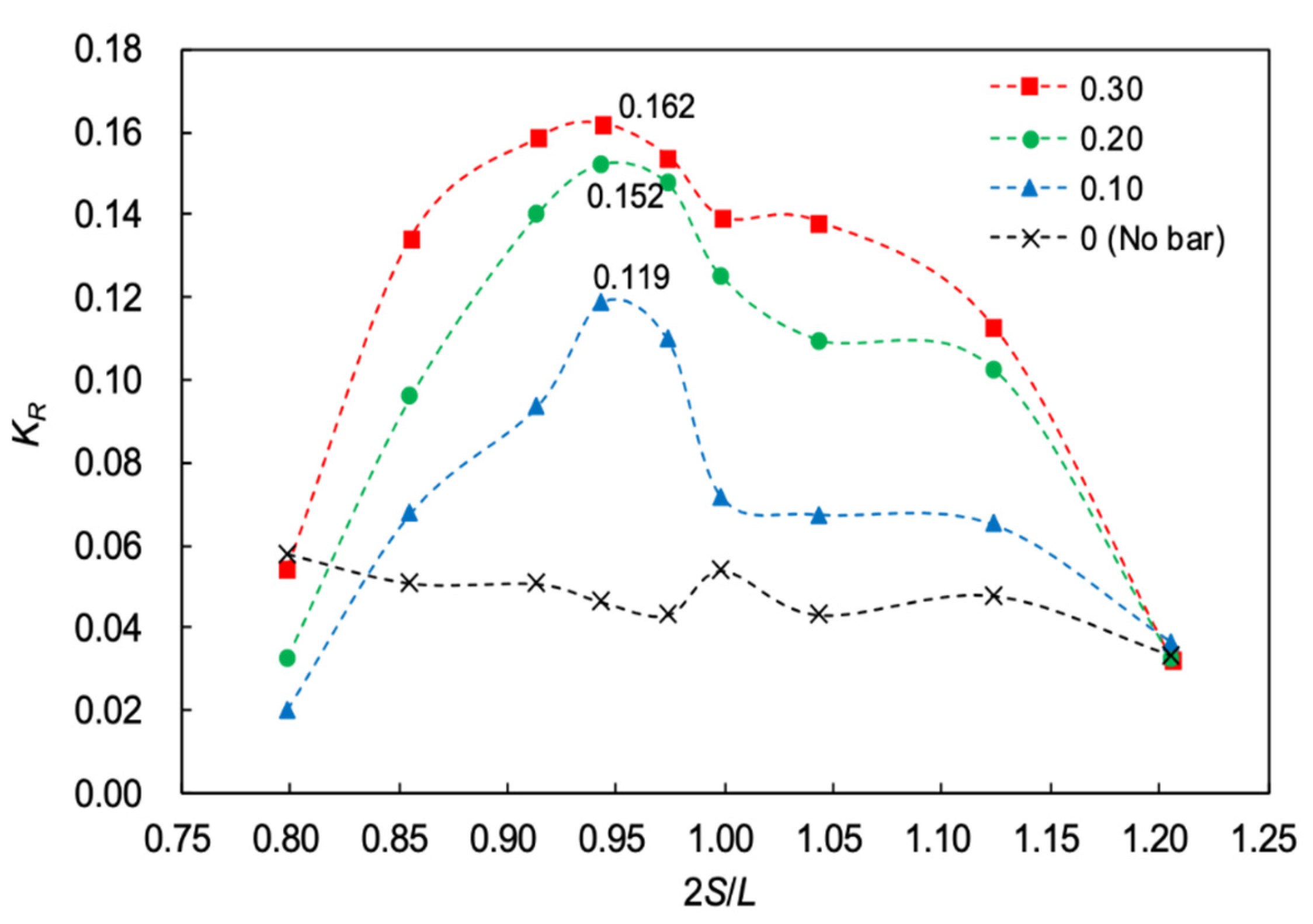 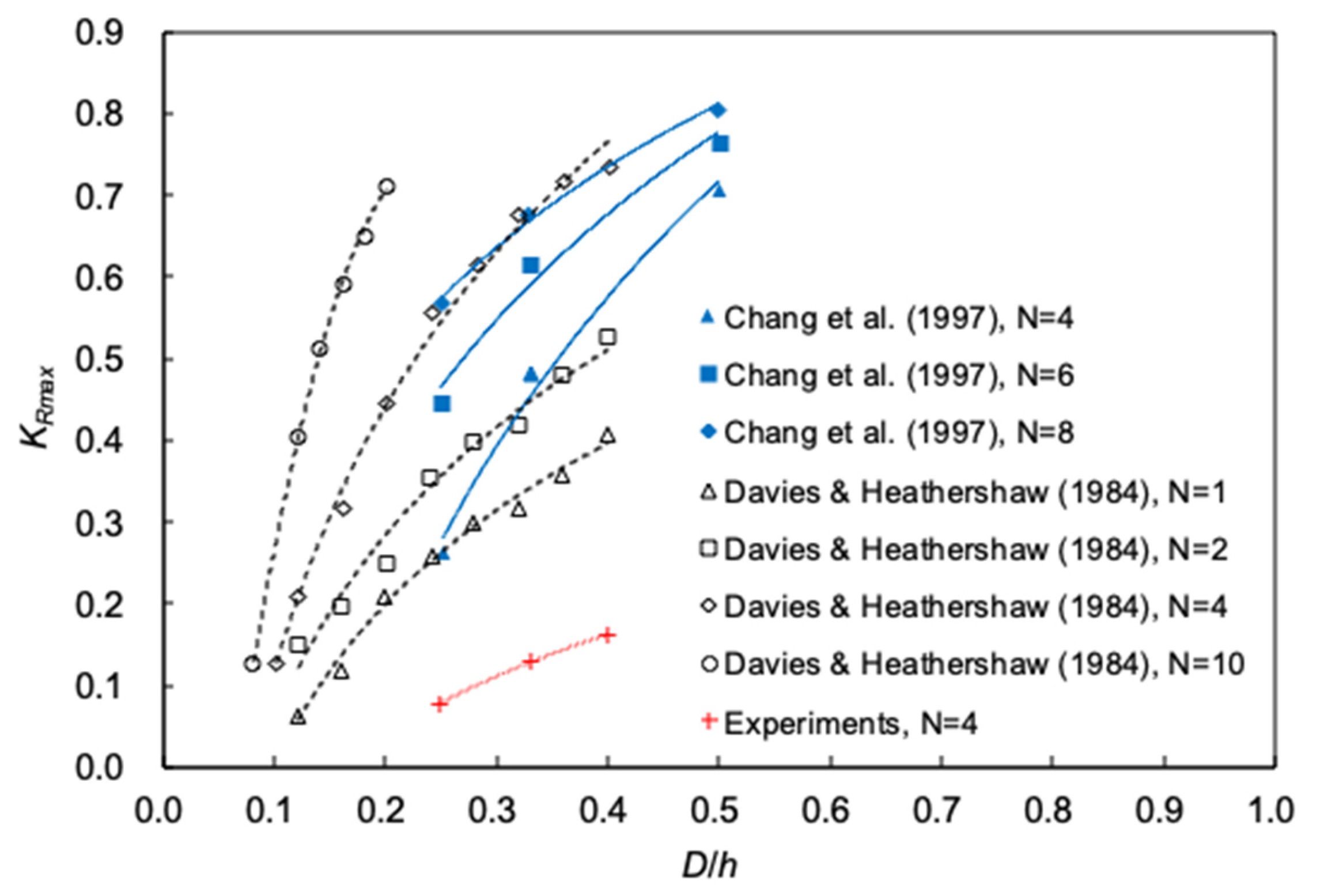 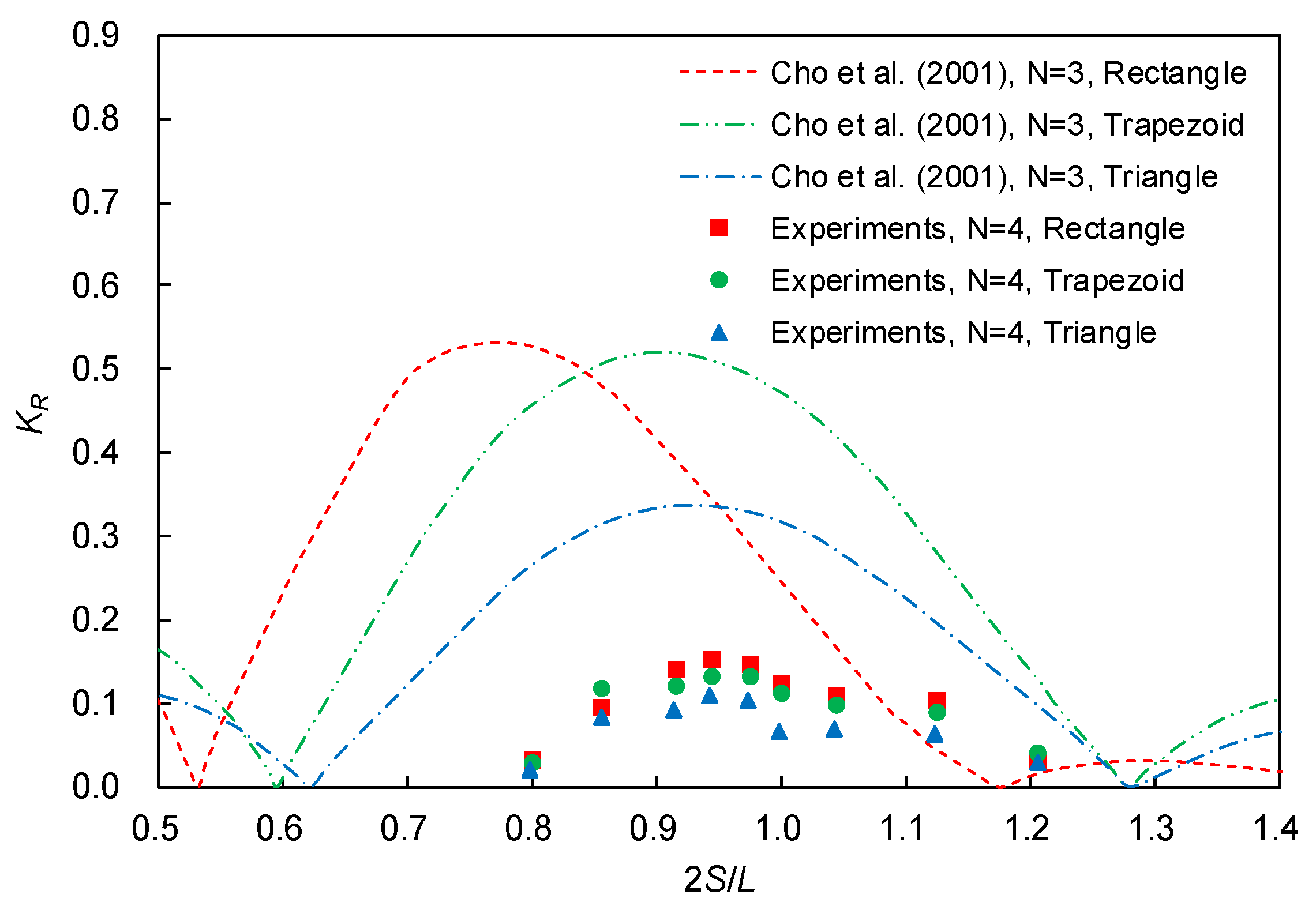