Single and Combined Toxicity Effects of Zinc Oxide Nanoparticles: Uptake and Accumulation in Marine Microalgae, Toxicity Mechanisms, and Their Fate in the Marine Environment
Previous Article in Special Issue

The Yellow River is the second largest river in China, with a total length of 5464 km. It originates from the Qinghai–Tibet Plateau, flows through nine provinces (autonomous regions) from west to east, and flows into the Bohai Sea in Dongying City, Shandong Province. There are huge differences in the topography and landforms in the basin, large differences in altitude, and obvious differences in the natural environment. The YRB is a belt rich in energy resources, with obvious advantages in hydropower, coal, oil, and natural gas, and it has rich and diverse mineral resources. The natural conditions of the YRB and the regions it passes through are very different, and the economic development is unbalanced. For example, the total GDP of Shandong Province in 2020 is 24.33 times that of Qinghai Province. The problem of unbalanced and insufficient development between regions is prominent. In addition, the YRB has various ecological function types and various nature reserves, and it is the ecological security and ecological optimization belt in China.
The YRB includes nine provinces (autonomous regions). Among them, there is a serious lack of data on Haidong City and autonomous prefectures; Sichuan Province only flows through a small area of the YRB; Inner Mongolia’s Dongsimeng belongs to the broad northeast region; Laiwu City was merged into Jinan City in Shangdong Province in 2019. Therefore, this paper excludes the above cities and selects 78 prefecture-level cities in the YRB as the research objects. Maps were generated using ArcGIS 10.8, as shown in Figure 1. The data mainly come from the “China Environmental Statistical Yearbook”, “China Urban Statistical Yearbook”, the statistical yearbooks of various cities, the National Bureau of Statistics website, and the EPS database.

The current research has not yet uniformly defined the connotation of HQD. Starting from the goal of HQD, the connotation of HQD is efficient, fair, green, and sustainable development aimed at meeting people’s growing needs for a better life [10]. HQD is the economic development mode, structure, and dynamic state that meet the real needs of people’s growth [7]. From the perspective of the “five development concepts” and the main social contradictions, HQD is defined by identifying imbalances and inadequacies in economic and social development [45]. As a typical river basin flowing through China’s nine major provinces and regions, the YRB requires HQD based on the full consideration of various factors, such as the natural ecological environment and economic structure characteristics of the basin, guided by systematization, integrity, and relevance, as well as the benign interaction and coordinated development of economy, society, and the ecology in the whole basin [2].

The selection of indicators in this paper is based on the principles of comprehensiveness, systematicness, objectivity, and data availability. Drawing on the research ideas of Liu et al. [24] and Lin et al. [49], this paper constructs 25 evaluation indicators from the four dimensions of HQD, including the driving force, structure, method, and achievement, and establishes a scientific, fair, objective, and practical indicator system for HQD in the YRB, as shown in Table 1.
In terms of the driving force of HQD, it is divided into two element layers: technological progress and human capital. It mainly reflects the transformation of economic development from factor-driven to innovation-driven relying on human capital, which is an important symbol of HQD and the cornerstone of ensuring green, fair, and sustainable development. Therefore, the level of technological progress and the level of human capital are measured here. The level of technological progress is measured by the intensity of R&D expenditures and the proportion of scientific and technological expenditures in fiscal expenditures to the total population of the region.
In terms of the structure of HQD, the proportion of the added value of the tertiary industry in the regional GDP is used to reflect the changes in the industrial structure. The proportion of deposits and loans of financial institutions in the GDP is used to measure the changes in the financial structure. The ratio of the per capita income of urban and rural residents and the urbanization rate reflects the urban and rural structure. The proportion of foreign investment in the regional GDP reflects the level of economic opening to the outside world.
In terms of the method of HQD, it is divided into two element layers: resource conservation and environmental protection. In terms of resource conservation, the energy consumption per unit of GDP and electricity consumption per unit of GDP are selected to represent the main indicators of resource conservation by economic activities. The per capita area of park green space represents the main indicator of economic activities for environmental protection.
In terms of the results of HQD, the per capita GDP is used to measure the level of economic development, the proportion of fiscal revenue to GDP is used to measure the quality of economic operation, and the urban registered unemployment rate is used to measure the impact of economic fluctuations on people’s living and welfare. Indicators, such as the number of public libraries per 10,000 people and the number of public transport vehicles per 10,000 people, are used to measure multi-dimensional social life. Indicators such as the number of beds in medical institutions per 1000 people and the number of people insured by endowment insurance are used to measure social security. In terms of environmental cost, the amount of wastewater discharged per unit of output, the amount of sulfur dioxide discharged per unit of output, and the amount of smoke emissions (dust) are used to measure the damage to the environment caused by economic activity.

The explanatory variable in this paper is the high-quality development level (HQD). This paper uses the entropy method to construct an indicator system for HQD in the YRB from four dimensions, namely, the driving force, structure, method, and achievement of HQD, as shown in Table 1.

Environmental regulation (ER): This is a general term for the “policies, regulations, measures, and means” promulgated and implemented by the government or related organizations. Currently, the measurement of environmental regulation is mainly divided into two categories: the single index method and the comprehensive index method. Single indicators mainly include pollution fee collection [53], single pollutant discharge or treatment efficiency [54,55], environmental treatment costs [56,57], and environmental protection regulations and standards [58,59]. The comprehensive index method selects indicators from different angles. It constructs comprehensive indicators, such as various pollutant removal rates [60,61], environmental taxes and fees [62], and environmental input [63], by weighting using the entropy weight method and factor analysis method. This paper combines the availability and accuracy of data and refers to the construction methods of relevant empirical research [57,64]. It calculates the discharge of industrial wastewater, industrial waste gas, and industrial solid waste using the entropy weight method to obtain a comprehensive environmental regulation index.
Local government competition (GOV): Most of the literature uses the ratio of productive expenditure to total regional budget expenditure [65], FDI per capita, FDI per unit of GDP, and the share of FDI in national FDI [66] as proxy variables. However, this paper suggests motives for chasing and surpassing neighboring prefecture-level cities in the whole region. Therefore, referring to the research method of Miu et al. [67], this paper adopts the level of economic catching up as a proxy variable of local government competition.
First, this paper calculates the highest per capita GDP of neighboring cities divided by the highest per capita GDP of decision-making units. Next, it calculates the highest per capita GDP of all the regions and cities divided by the highest per capita GDP of decision-making units. Finally, it multiplies the two to obtain the economic catch-up level.

To alleviate the possible endogeneity problem in the benchmark model, according to Arellano and Bover [71], this paper uses the lag one period of the HQD index as an instrumental variable to perform a systematic generalized method of moments (GMM). The results are shown in Table 7. The AR(2) value is greater than 0.1, and the value of Hansen’s test is greater than 0.1, indicating that the instrumental variable selected by the model is reasonable. After removing the endogeneity, the lag term coefficient of the HQD index is significant at the statistical level of 1%. The HQD level has a strong trend, and the HQD level of the previous period affects the current period; the environment regulation still has a significant positive impact on the HQD level of the YRB at the statistical level of 1%.

This research was funded by the key project of the National Social Science Foundation of China (No. 21AZD042) and the special project for cultivating leading talents in philosophy and social sciences in Zhejiang Province (No. 21YJRC06ZD, 21YJRC06-2YB).

Publicly available datasets were analyzed in this paper. This data can be found here: https://data.cnki.net/Yearbook/Single/N2021050059 (accessed on 1 May 2022).

The authors are grateful to the editors and the anonymous reviewers for their insightful comments and helpful suggestions. 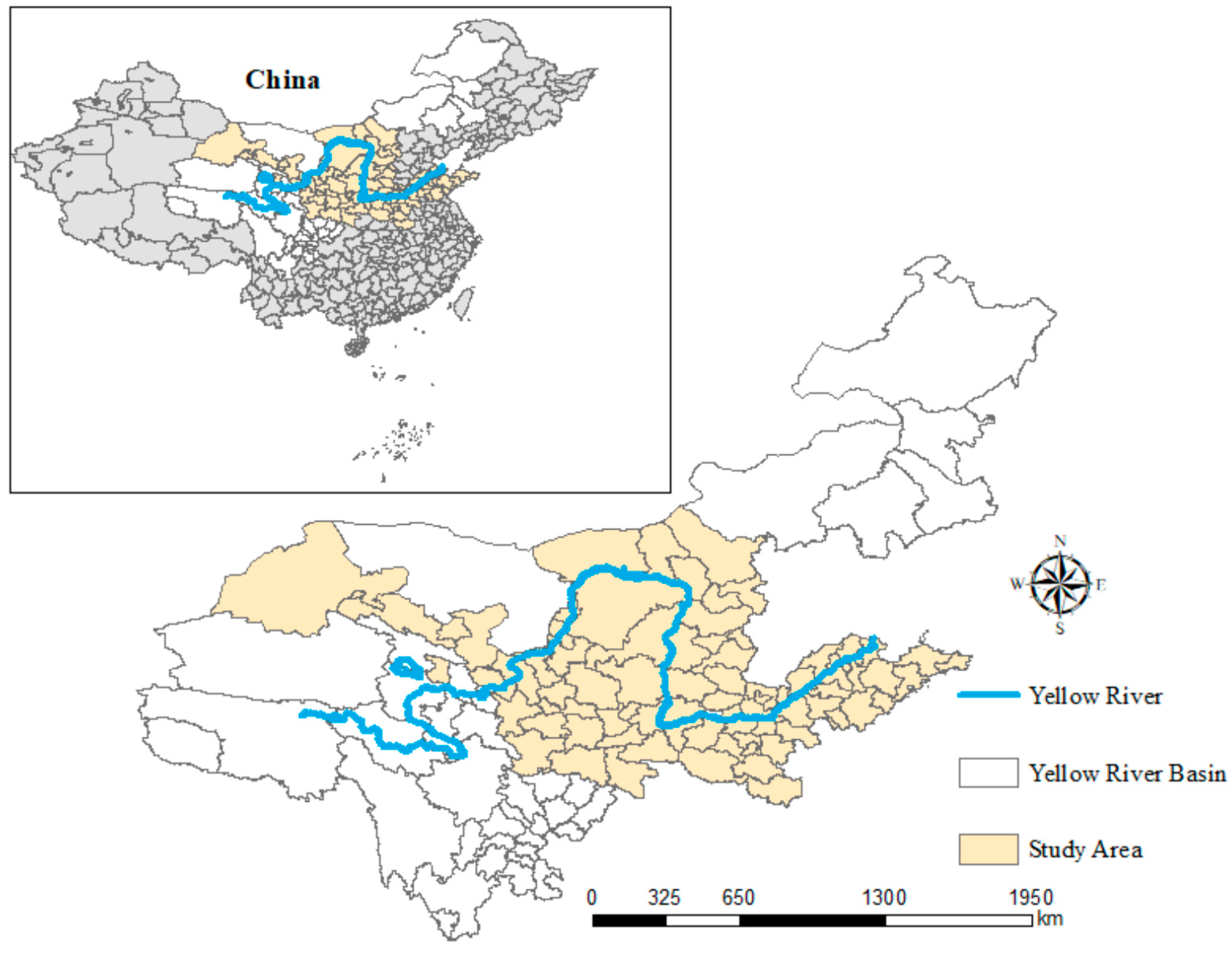