Impact of Water Fluctuation from a Dam on the Mekong River on the Hatching Success of Two Sandbar-Nesting Birds: A Case Study from Bueng Kan Province, Thailand

Dam construction for the provision of hydropower and a stable water supply poses a major threat to freshwater biodiversity. Water fluctuation due to dam management has adverse effects on local people and biodiversity in downstream areas, including sandbar-nesting birds. The aim of this research was to determine the effect of water levels controlled by upstream dams on the breeding success of two sandbar-nesting birds, the little ringed plover, Charadrius dubius, and little pratincole, Glareola lacteal, along the Mekong River in Bueng Kan Province, Thailand. During January–May 2018, we found 160 active nests of only two species, the little ringed plover (n = 26 nests, 288 exposure days) and the little pratincole (n = 134 nests, 890 exposure days). Their nest success rates were 19.49 ± 7.52% and 5.54 ± 1.61%, respectively. Predation was a major cause of nest failure for both species (n = 82), followed by flooding (n = 44). We found a significantly increased probability of nest flooding when the water level was higher than when the nest was initiated for those located closer to the water, particularly during March and April, when water levels fluctuated. Our results indicate that dams threaten sandbar-nesting species. View Full-Text
Keywords: Mekong River; dam; breeding success; water fluctuation; sandbar-nesting birds Mekong River; dam; breeding success; water fluctuation; sandbar-nesting birds
►▼ Show Figures 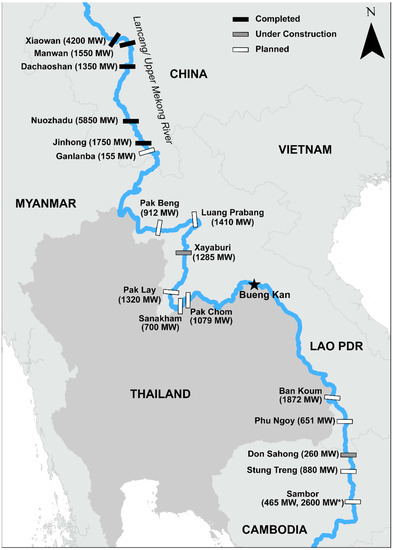