Spatiotemporal Distribution of Drought Based on the Standardized Precipitation Index and Cloud Models in the Haihe Plain, China

The installation of hydroelectric plants has generated multiple environmental impacts on the world’s river systems. In central Chile, the impacts of hydroelectric reservoir operation have been documented in ecological and hydrologic regime terms. This investigation assesses the changes in channel morphology, vegetation distribution, and flows in the middle section of the Maule River during the period following the start-up of a hydroelectric plant. Changes in fluvial morphology (active area) and land cover are quantified using LANDSAT images, contrasted with a vegetation sampling and flow analysis. The results show a 12% decrease in active areas of the river, indicating a loss of geomorphological diversity. Within the active channel, there was a gradual increase in plant-covered surface area, which reached 159% between 1989 and 2018, mainly due to reductions in water (−61%), active bar (−35%), and bare soil surface areas (−29%). The changes were evident ten years after plant operations began and intensified during the period known as the megadrought in central Chile (2008–2018). The flow magnitudes present a decrease for exceedance probabilities (P) below 85% in the period after 1985, with a slight increase recorded for low flows (P > 85%). In the segments with superior stabilization, invasive species such as Acacia dealbata (silver wattle) predominated, which are specialists at taking advantage of disturbances to settle and stabilize active areas, narrowing the possibilities for morphological change. View Full-Text
Keywords: dams; fluvial geomorphology; land covers; multi-temporal analysis dams; fluvial geomorphology; land covers; multi-temporal analysis
►▼ Show Figures 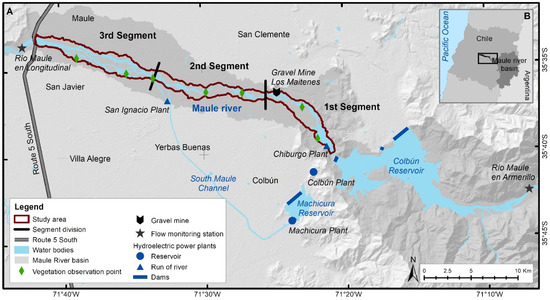