Assessment of the Ecological Risk from Heavy Metals in the Surface Sediment of River Surma, Bangladesh: Coupled Approach of Monte Carlo Simulation and Multi-Component Statistical Analysis
Previous Article in Journal

Integrated Approach to Quantify the Impact of Land Use and Land Cover Changes on Water Quality of Surma River, Sylhet, Bangladesh

This study aims to assess the impacts of land use and land cover (LULC) changes on the water quality of the Surma river in Bangladesh. For this, seasonal water quality changes were assessed in comparison to the LULC changes recorded from 2010 to 2019. Obtained results from this study indicated that pH, electrical conductivity (EC), and total dissolved solids (TDS) concentrations were higher during the dry season, while dissolved oxygen (DO), 5-day biological oxygen demand (BOD5), temperature, total suspended solids (TSS), and total solids (TS) concentrations also changed with the season. The analysis of LULC changes within 1000-m buffer zones around the sampling stations revealed that agricultural and vegetation classes decreased; while built-up, waterbody and barren lands increased. Correlation analyses showed that BOD5, temperature, EC, TDS, and TSS had a significant relationship (5% level) with LULC types. The regression result indicated that BOD5 was sensitive to changing waterbody (predictors, R2 = 0.645), temperature was sensitive to changing waterbodies and agricultural land (R2 = 0.889); and EC was sensitive to built-up, vegetation, and barren land (R2 = 0.833). Waterbody, built-up, and agricultural LULC were predictors for TDS (R2 = 0.993); and waterbody, built-up, and barren LULC were predictors for TSS (R2 = 0.922). Built-up areas and waterbodies appeared to have the strongest effect on different water quality parameters. Scientific finding from this study will be vital for decision makers in developing more robust land use management plan at the local level. View Full-Text
Keywords: water quality; buffer zone; land use/land cover; Bangladesh water quality; buffer zone; land use/land cover; Bangladesh
►▼ Show Figures 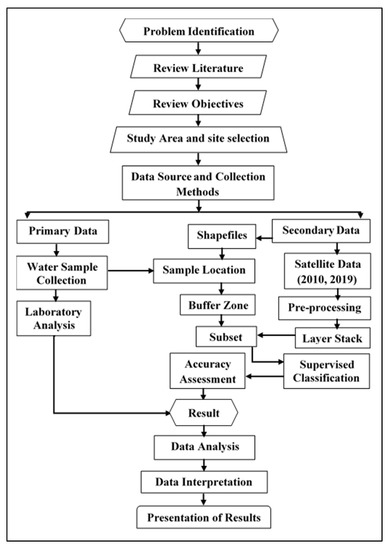