The Weixi–Qiaohou Fault (WQF) is considered an important zone of the western boundary of the Sichuan–Yunnan block, and its seismicity has attracted much attention after a series of moderate–strong earthquakes, especially the Yangbi Ms6.4 earthquake that occurred on 21 May 2021. In the present research, we investigate major and trace elements, as well as hydrogen and oxygen isotopes, of 10 hot springs sites located along the WQF, which are recharged by infiltrated precipitation from 1.9 to 3.1 km. The hydrochemical types of most analyzed geothermal waters are HCO3SO4-Na, SO4Cl-NaCa, and SO4-Ca, proving that they are composed of immature water and thus are characterized by weak water–rock reactions. The heat storage temperature range was from 44.1 °C to 101.1 °C; the circulation depth was estimated to range between 1.4 and 4.3 km. The results of annual data analysis showed that Na+, Cl−, and SO42− in hot springs decreased by 11.20% to 23.80% north of the Yangbi Ms5.1 earthquake, which occurred on 27 March 2017, but increased by 5.0% to 28.45% to the south; this might be correlated with the difference in seismicity within the fault zone. The results of continuous measurements of NJ (H1) and EYXX (H2) showed irregular variation anomalies 20 days before the Yangbi Ms6.4 earthquake. In addition, Cl− concentration is more sensitive to near-field seismicity with respect to Na+ and SO42−. We finally obtained a conceptual model on the origin of groundwater and the hydrogeochemical cycling process in the WQF. The results suggest that anomalies in the water chemistry of hot spring water can be used as a valid indicator of earthquake precursors. View Full-Text
Keywords: thermal spring; isotopes; hydrogeochemistry; earthquake thermal spring; isotopes; hydrogeochemistry; earthquake
►▼ Show Figures 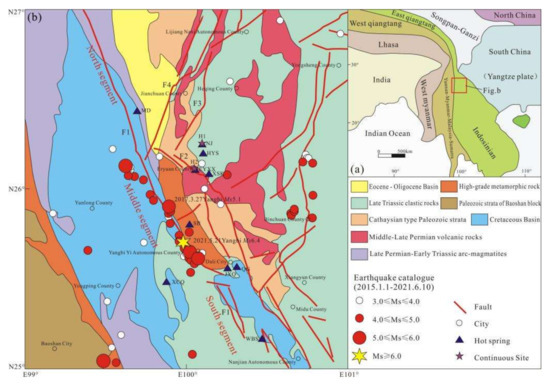 Ronglong Bai
Ph.D., major in geology, with research interests in isotope geochemistry and mineral resources exploration
Zoom | Orient | As Lines | As Sticks | As Cartoon | As Surface | Previous Scene | Next Scene
We use cookies on our website to ensure you get the best experience. Read more about our cookies here.
Accept
We have just recently launched a new version of our website. Help us to further improve by taking part in this short 5 minute survey here. here.
Never show this again