Precipitation is the main source for replenishing groundwater stored in aquifers for a myriad of beneficial purposes, especially in arid and semi-arid regions. A significant portion of the municipal and agricultural water demand is satisfied through groundwater withdrawals in Texas. These withdrawals have to be monitored and regulated to be in balance with the recharge amount from precipitation in order to ensure water security. The main goal of this study is to understand the spatio-temporal variability of precipitation in the 21st century using high spatial resolution stage-IV radar data over the state of Texas and examine some climatic controls behind this variability. The results will shed light on the trends of precipitation and hence will contribute to improving water resources management strategies and policies. Pettit’s test and Standard Normal Homogeneity Test (SNHT), tools for detecting change-point in the monthly precipitation, suggested change-points have occurred across the state around the years 2013 and 2014. The test for the homogeneity of the data before and after 2013 revealed that, in over 64% of the state, the precipitation means were significantly different. The Panhandle region (northern part) is the only part of the state that did not show a significant difference in the mean precipitation before and after 2013. Theil-Sen’s slope test, Correlated Seasonal Mann-Kendall Test, and Cox and Stuart Trend Test all indicated that there were no significant trends in the monthly precipitation after 2013 in over 98% of the area of the state. Texas precipitation was found to be influenced significantly by the El Niño-Southern Oscillation (ENSO) and the Pacific Decadal Oscillation (PDO). A significant correlation in more than 82% and 60% of the state was found with ENSO at two-month and with PDO at four-month lag, respectively. View Full-Text
Keywords: precipitation; NEXt-generation Weather RADar (NEXRAD); Texas; water resources precipitation; NEXt-generation Weather RADar (NEXRAD); Texas; water resources
►▼ Show Figures 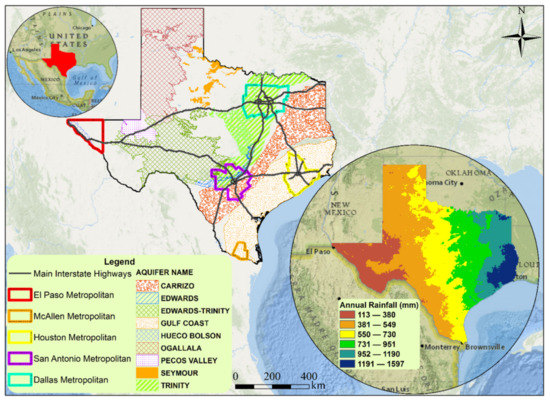