Sulfide related odor and corrosion are two of the major problems associated with the operation and maintenance of sewer networks. The extent of the problems is governed by several complex and interrelated processes. Sulfide oxidation is typically the most important process for sulfide removal in wastewater from aerobic gravity sewers. Despite the significance of the process, little is known about the significance of the growth of sulfide oxidizing bacteria (SOB) during the transport of wastewater. Biological sulfide oxidation in wastewater from sewers was investigated in a series of oxygen uptake rate (OUR) experiments. The experiments showed that, for oxygen nonlimiting conditions, sulfate was produced, with elemental sulfur as an intermediate. During each experiment, the activity of the sulfide oxidizing bacteria increased significantly. This was interpreted as the result of bacterial growth related to the oxidation of intermediately stored elemental sulfur. A model concept describing biological sulfide oxidation, with intermediary storage of elemental sulfur and associated growth, was developed. The model was calibrated against the experimental results. The observed average growth rate and yield constant for the SOB were determined at 1.98 d−1 and 0.17 g Chemical Oxygen Demand (COD) per g sulfur, respectively. These values correspond to reported values for mixed cultures of autotrophic SOB. View Full-Text
Keywords: sulfide oxidation; wastewater; sewer; modeling sulfide oxidation; wastewater; sewer; modeling
►▼ Show Figures 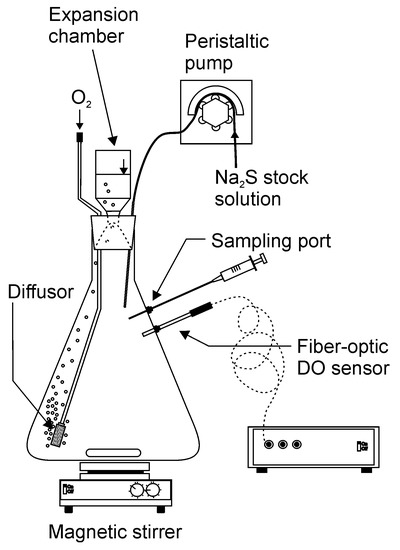