Clarifying the combined effects of water temperature and other environmental factors on the species distributions of cold-water fishes is the first step toward obtaining a better understanding of the complex impacts of climate warming on these species. In the present study, we examined the abundance and occurrence of the fluvial sculpin, Cottus nozawae, in response to water temperature along environmental gradients in northern Japan. The abundance survey was conducted in the Sorachi River catchment with two-pass electrofishing with a backpack electrofisher. For the occurrence survey, we carried out one-pass electrofishing in the Sorachi, Chitose, and Tokachi River catchments. Fish sampling was conducted once from July to August 2018 in the Sorachi River catchment, from May to June 2011 in the Chitose River catchment, and from July to September 2012 in the Tokachi River catchment. Generalized linear mixed models (GLMMs) and generalized linear models (GLMs) were used for the abundance and occurrence analyses, respectively. We found that the mean summer water temperature was the most influential factor on the distribution of C. nozawae; the abundance and occurrence were both negatively affected by increased water temperatures. In the occurrence model, occurrence probabilities of 0.9 and 0.5 for C. nozawae corresponded to mean summer temperatures of 12.0 and 16.1 °C, respectively. Furthermore, we identified a combined effect of water temperature and current velocity on the abundance of C. nozawae. The increased mean summer water temperature had a stronger negative effect on C. nozawae abundance under gentle flow conditions. While the precise mechanisms of this combined effect could not be determined in this study, stressors associated with low current velocities may increase their vulnerability to higher water temperatures. Our findings indicate that flow disturbances caused by human activities such as excessive water abstraction may exacerbate the negative impacts of climate warming on populations of C. nozawae in the future. View Full-Text
Keywords: flow regime; interactive effects; global warming; species distribution models; thermal regime flow regime; interactive effects; global warming; species distribution models; thermal regime
►▼ Show Figures 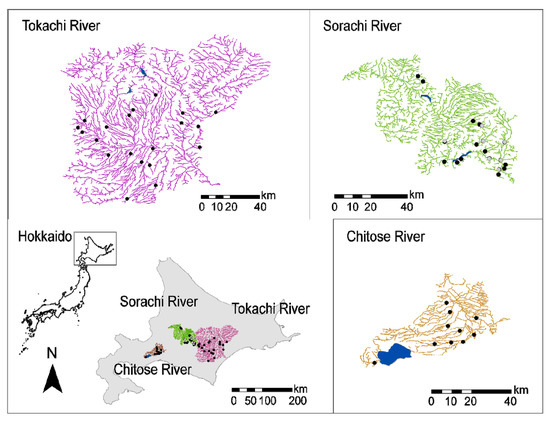