Flumes have been widely used in water conservancy science and environmental science research. It is of great significance to obtain the hydrodynamic characteristics and flow field uniformity in the flume. In this study, a new type of annular flume was taken as an example. The 3D flow field was simulated by using a commercial computational fluid dynamics (CFD) code, and was also measured by acoustic doppler velocimeter (ADV) to verify the simulation results. The average relative error range was between 8.37% and 9.95%, the simulated results basically reflected the actual situation of the flow field. On this basis, the structural characteristics of flow field were analyzed. A new calculation method of flow velocity uniformity was presented according to the flow characteristics of natural open channels. The velocity uniformity in the straight channel was calculated and analyzed based on this method, and the influence of speed on the velocity uniformity was further discussed. The length of uniform section was negatively correlated with the rotational speed (average velocity), which was between 39 cm and 101 cm in the straight, and the uniformity coefficient was less than 10%. Finally, the water flow characteristics in the straight channel without wheel were compared with the natural open channel flow. The longitudinal velocity was well fitted with the Prandtl logarithmic distribution formula (R2 > 0.977), and the application feasibility of the flume was analyzed. This study can provide technical support for the development and application of annular flume. View Full-Text
Keywords: annular flume; CFD; gravity flow; hydrodynamic characteristics; velocity distribution uniformity annular flume; CFD; gravity flow; hydrodynamic characteristics; velocity distribution uniformity
►▼ Show Figures 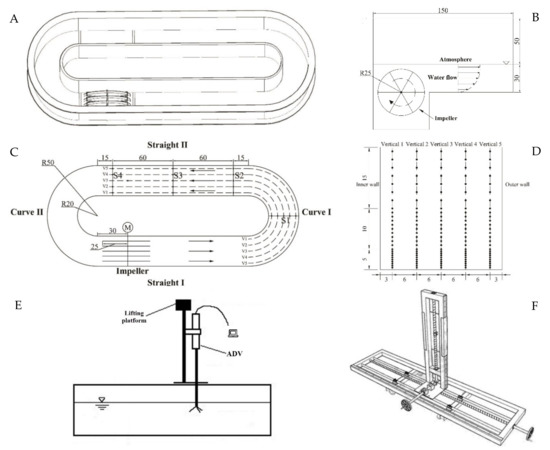