Geometric Model of a Coastal Aquifer to Promote the Sustainable Use of Water. Manglaralto, Ecuador
Previous Article in Journal

Textile wastewater (TW) contains toxic pollutants that pose both environmental and human health risks. Reportedly, some of these pollutants, including NO3−, NO2− and reactive black 5 (RB-5) dye, can be removed via hydrogen-based denitrification (HD); however, it is still unclear how different factors affect their simultaneous removal. This study aimed to investigate the effect of H2 flow rate, the sparging cycle of air and H2, and initial dye concentration on the TW treatment process. Thus, two reactors, an anaerobic HD reactor and a combined aerobic/anaerobic HD reactor, were used to investigate the treatment performance. The results obtained that increasing the H2 flow rate in the anaerobic HD reactor increased nitrogen removal and decolorization removal rates. Further, increasing the time for anaerobic treatment significantly enhanced the pollutant removal rate in the combined reactor. Furthermore, an increase in initial dye concentration resulted in lower nitrogen removal rates. Additionally, some of the dye was decolorized during the HD process via bacterial degradation, and increasing the initial dye concentration resulted in a decrease in the decolorization rate. Bacterial communities, including Xanthomonadaceae, Rhodocyclaceae, and Thauera spp., are presented as the microbial species that play a key role in the mechanisms related to nitrogen removal and RB-5 decolorization under both HD conditions. However, both reactors showed similar treatment efficiencies; hence, based on these results, the use of a combined aerobic/anaerobic HD system should be used to reduce organic/inorganic pollutant contents in real textile wastewater before discharging is recommended. View Full-Text
Keywords: biodegradation; decolorization removal efficiency; hydrogen-based denitrification; microbial community; nitrate removal efficiency; synthetic textile wastewater biodegradation; decolorization removal efficiency; hydrogen-based denitrification; microbial community; nitrate removal efficiency; synthetic textile wastewater
►▼ Show Figures 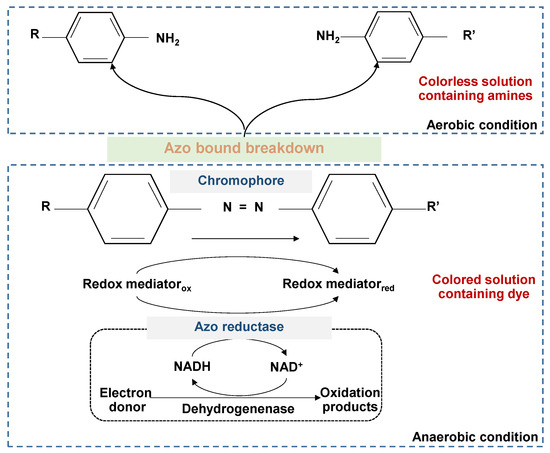 Tippawan Singhopon
The author is a Ph.D. candidate in the Department of Engineering and Agricultural Science at the University of Yamanashi, Japan. She’s received the M.Eng. degree in the School of Environment, Resources and Development at the Asian Institute of Technology, Thailand, in 2017, and with bachelor’s of Environmental Engineering, Khon Kaen, Thailand, 2011. She’s a background in the water, wastewater treatment process, on-site treatment process, and biological-denitrification process.
Zoom | Orient | As Lines | As Sticks | As Cartoon | As Surface | Previous Scene | Next Scene
We use cookies on our website to ensure you get the best experience. Read more about our cookies here.
Accept
We have just recently launched a new version of our website. Help us to further improve by taking part in this short 5 minute survey here. here.
Never show this again