Department of Environmental Hydrology and Microbiology (EHM), The Zuckerberg Institute for Water Research (ZIWR), The Jacob Blaustein Institutes for Desert Research, Ben-Gurion University of the Negev, Sede Boqer Campus 8499000, Israel
*
Author to whom correspondence should be addressed.
Academic Editor: Tamas Komives
Water 2021, 13(7), 903; https://doi.org/10.3390/w13070903
Received: 26 February 2021 / Revised: 22 March 2021 / Accepted: 23 March 2021 / Published: 26 March 2021
(This article belongs to the Special Issue The Use of Greywater and Wastewater for Irrigation)

To reduce public health hazards, greywater reuse may involve disinfection, which is often performed through chlorination. The formation of toxic disinfection by-products is a negative side-effect of chlorine’s reaction with organic matter, of which trihalomethanes (THM) are one of the most dominant (though not most toxic) groups. Greywater treatment in vertical flow constructed wetlands leads to a decrease in dissolved organic matter. We hypothesized that these dissolved organic carbon (DOC) changes would be reflected in differences in THM formation. Greywater samples, at different treatment levels (i.e., decreasing organic matter content), were exposed to 5 mg/L of chlorine for 1 h. THM formation in raw greywater samples was significantly lower than in the more treated (recirculated) samples, despite their significantly higher DO concentrations. This trend was verified in six different systems. Furthermore, this was also shown when greywater was exposed to higher chlorine doses (25 and 50 mg/L). It is suggested that the increase in THM formation for longer recirculated water is the result of two factors: competition between a higher number of reactive sites in the raw water’s organic matter, which leads to smaller THM yields, and changes in the abundance of THM formation moieties in the recirculated water’s DOC. The latter was reflected in the SUVA increase in the treated water. Overall, THM formation, following treated greywater chlorination at the lower chlorine concentration studied, is not expected to pose an environmental health risk when the water is reused for irrigation. View Full-Text
Keywords: disinfection by-products; greywater; DOC; chlorination disinfection by-products; greywater; DOC; chlorination
►▼ Show Figures 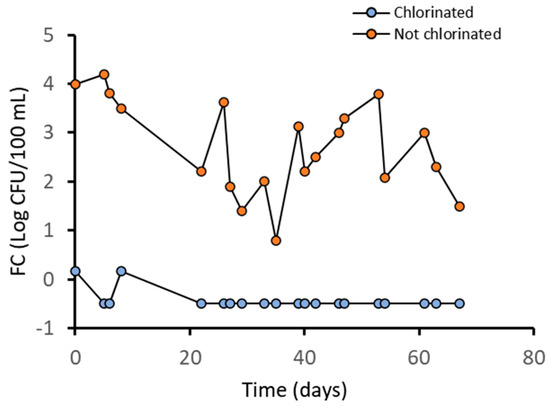