Spatial and Temporal Changes of Groundwater Storage in the Quaternary Aquifer, UAE
Next Article in Special Issue

An Assessment of Groundwater Recharge at a Regional Scale for Sustainable Resource Management: Province of Alicante (SE Spain)
Previous Article in Special Issue

This article proposes a new approach for determining the optimal parameter (β) in the Inverse Distance Weighted Method (IDW) for spatial interpolation of hydrological data series. This is based on a genetic algorithm (GA) and finds a unique β for the entire study region, while the classical one determines different βs for different interpolated series. The algorithm is proposed in four scenarios crossover/mutation: single-point/uniform, single-point/swap, two-point/uniform, and two-point swap. Its performances are evaluated on data series collected for 41 years at ten observation sites, in terms of mean absolute error (MAE) and mean standard error (MSE). The smallest errors are obtained in the two-point swap scenario. Comparisons of the results with those of the ordinary kriging (KG), classical IDW (with β = 2 and the optimum beta found by our algorithm), and the Optimized IDW with Particle Swarm Optimization (OIDW) for each study data series show that the present approach better performs in 70% (80%) cases. View Full-Text
Keywords: genetic algorithm (GA); IDW; spatial interpolation genetic algorithm (GA); IDW; spatial interpolation
►▼ Show Figures 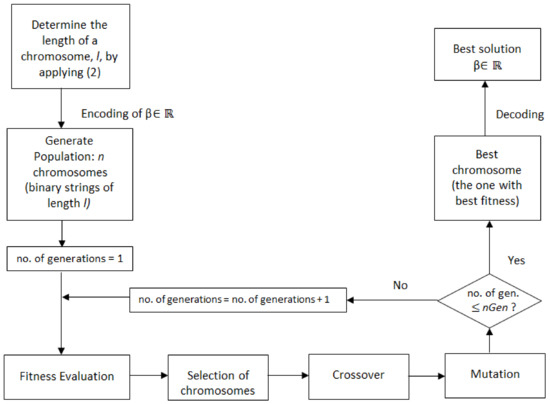