Rethinking Climate, Climate Change, and Their Relationship with Water
Next Article in Special Issue

Climate Change Patterns of Wild Blueberry Fields in Downeast, Maine over the Past 40 Years

Mangroves growing in tropical and subtropical intertidal zones face challenges from warming and altered rainfall patterns associated with global climate change. Intraspecific variation in hydraulic traits may allow a mangrove species to acclimate to novel climatic conditions, yet little is known regarding the potential for adaptive plasticity in these traits. In this study, we aimed to quantify the variation in plant hydraulic traits of two widespread mangrove species growing across a latitudinal gradient. We investigated the xylem hydraulic structure and function of Avicennia marina and Aegiceras corniculatum, across three sites spanning a latitudinal gradient of 17.45° in eastern Australia. We found that both species were highly resistant to xylem embolism and that there was significant intraspecific variation in hydraulic traits between sites. The highest embolism resistance and sapwood-specific hydraulic conductivity (KS) were found at the lowest latitude site that had the highest mean annual temperature and precipitation. A. marina showed no differences in vessel size and density among sites. It has other special features such as successive cambia enhancing its ability to adapt to a large environmental gradient. In contrast, A. corniculatum showed higher vessel densities at lower latitudes. There was a significant and positive correlation (R2 = 0.72, p < 0.05) between KS and embolism resistance across species and sites, suggesting the absence of a tradeoff between hydraulic efficiency and safety. Both embolism resistance and KS were negatively correlated with wood density but positively with vessel wall reinforcement. This study reveals that these two widespread mangrove species were adapted to warmer climates by enhancing both hydraulic efficiency and safety. View Full-Text
Keywords: xylem; hydraulics; latitudinal gradient; mangroves; anatomy; vulnerability to embolism xylem; hydraulics; latitudinal gradient; mangroves; anatomy; vulnerability to embolism
►▼ Show Figures 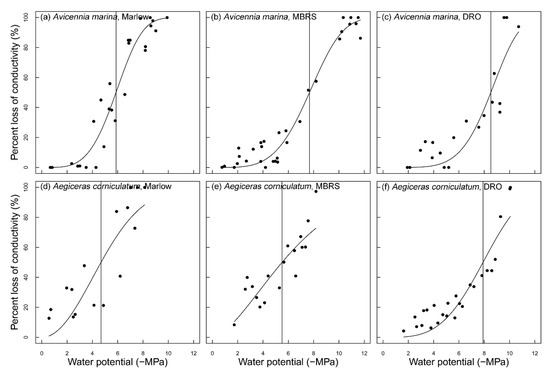