Timely maintenance of sewers is essential to preventing reduced functionality and breakdown of the systems. Due to the high costs associated with inspecting a sewer system, substantial research has focused on sewer deterioration modeling and identification of the most useful features. However, there is a lack of consensus in the findings. This study investigates how the feature importance depends on the definition of bad pipes and how the feature importance changes between utilities with similar data bases. A dataset containing 318,457 pipes from 35 utilities with a condition state (CS) ranging from one to four was used. The dataset was cleaned, and a backward step analysis (BSA) was applied to two ways of binarizing the CS. Additionally, a BSA was applied for each utility with ≥100 pipes in CS four. The results showed that a selective definition of bad pipes reduced the performance and changed the order of which features contributed the most. In each case, either year of construction, age, groundwater, year of rehabilitation, or dimension was the most important feature. On average 6.5 features contributed to the utility-specific models. The feature analysis was sensitive to the inspection strategy, the size of the dataset, and interdependency between the features. View Full-Text
Keywords: sewer; feature analysis; parameter importance; ageing; deterioration model; inspection strategy sewer; feature analysis; parameter importance; ageing; deterioration model; inspection strategy
►▼ Show Figures 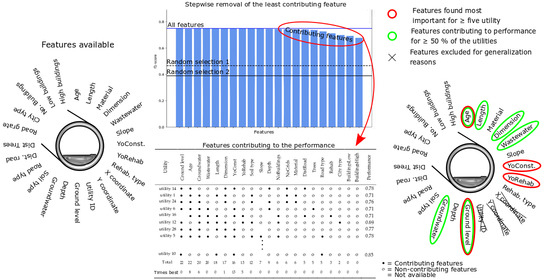