Is It a Drought or Only a Fluctuation in Precipitation Patterns?—Drought Reconnaissance in Poland
Previous Article in Journal

Research on the Influence of Small-Scale Terrain on Precipitation

Some of the rivers in northern China are dried, and reclaimed water (RW) is used to restore these degraded river ecosystems, during which the RW could recharge the aquifer by river bank infiltration. From 2007 to 2018, 2.78 × 108 m3 of RW has been replenished to the dried Chaobai River (Shunyi reach), Beijing, China, which is located on the edge of one depression cone in groundwater caused by groundwater over-pumping. The groundwater hydrodynamic variations and the flow path of the RW were identified by eight-year hydrological, hydrochemical, and stable isotopic data, together with multivariate statistical analysis. The RW infiltration drastically impacts the groundwater dynamics with a spatiotemporal variation. The 30-m depth groundwater levels at Perennial intake reach increased quickly around 3 m after 2007, which indicated that they were dominated by RW infiltration. Other 30-m depth groundwater levels were controlled by precipitation recharge from 2007 to 2011, showing significant seasonal variations. In 2012, with more RW transferred to the river, the hydrodynamic impact of the RW on 30-m depth aquifer expanded downstream. However, the 50-m and 80-m depth groundwater levels showed decreasing trend with seasonal variations, due to groundwater pumping. The 30-m depth aquifer was mainly recharged by RW, being evidenced by the enriched δ2H and δ18O. The depleted δ2H and δ18O of the 50-m and 80-m depth groundwater indicated that they were dominated by regional groundwater with meteoric origin. The heterogenous properties of the multi-layer alluvial aquifer offer the preferential flow path for RW transport in the aquifers. The proportion of the RW in the aquifers decreases with depth that was calculated by the chloride conservative mixing model. The increased lateral hydraulic gradient (0.43%) contributes to the RW transport in the 30-m depth aquifer. RW usage changed 30-m depth groundwater type from Ca·Mg-HCO3 to Na·Ca·Mg-HCO3·Cl. RW preferentially recharged the 50-m and 80-m depth aquifers by vertical leakage. View Full-Text
Keywords: heterogenous; increased hydraulic gradient; leakage; reclaimed water; transport heterogenous; increased hydraulic gradient; leakage; reclaimed water; transport
►▼ Show Figures 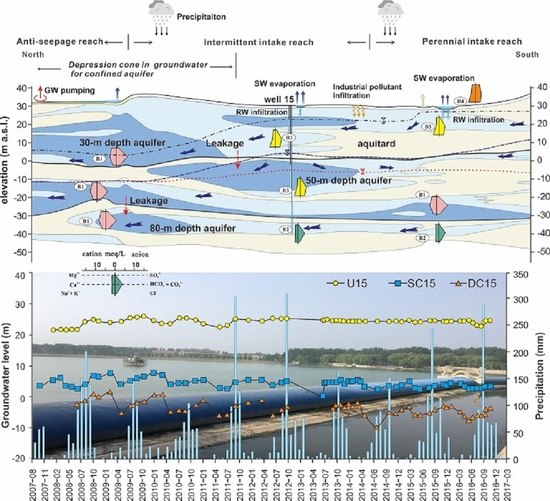