In this study, the SWAT (Soil Water Assessment Tool) hydrological model is implemented to determine the effect of climate change on various hydrological components in two basins located in the foothills of the Andes: the Quino and Muco river basins. The water cycle is analyzed by comparing the model results to climatic data observed in the past (1982–2016) to understand its trend behaviors. Then, the variations and geographical distribution of the components of the hydrological cycle were analyzed using the Representative Concentration Pathway (RCP)8.5 climate scenario to model two periods considering the immediate future (2020–2049) and intermediate future (2050–2079). In this way, in the study area, it is predicted that yearly average temperatures will increase up to 1.7 °C and that annual average precipitation will decrease up to 210 mm for the intermediate future. Obtained results show that the analyzed parameters presented the same trend behavior for both periods of time; however, a greater impact can be expected in the intermediate future. According to the spatial distribution, the impact worsens for all the parameters as the elevation increases in both basins. The model depicted that yearly average evapotranspiration would increase around 5.26% and 5.81% for Quino and Muco basins, respectively, due to the large increase in temperature. This may cause, when combined with the precipitation lessening, a decrease around 9.52% and 9.73% of percolation, 2.38% and 1.76% of surface flow, and 7.44% and 8.14% of groundwater for Quino and Muco basins, respectively, with a consequent decrease of the water yield in 5.25% and 4.98% in the aforementioned watersheds, respectively. View Full-Text
Keywords: climate change; RCP8.5; SWAT model; water cycle components climate change; RCP8.5; SWAT model; water cycle components
►▼ Show Figures 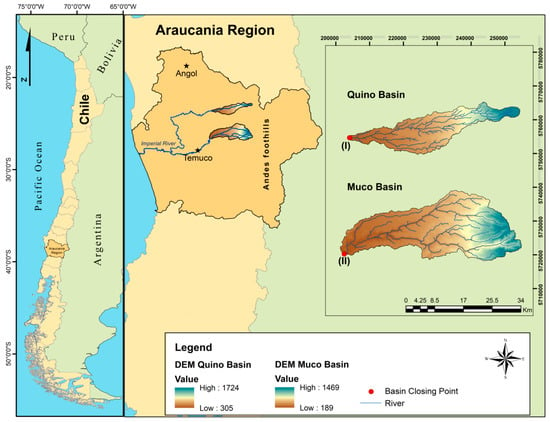