Modeling the Formation and Propagation of 2,4,6-trichloroanisole, a Dominant Taste and Odor Compound, in Water Distribution Systems

2,4,6-trichloroanisole (2,4,6-TCA) formation is often reported as a cause of taste and odor (T&O) problems in water distribution systems (WDSs). The biosynthesis via microbial O-methylation of 2,4,6-trichlorophenol (2,4,6-TCP) is the dominant formation pathway in distribution pipes. This paper attempted to utilize the reported data on the microbial O-methylation process to formulate deterministic kinetic models for explaining 2,4,6-TCA formation dynamics in WDSs. The pipe material’s critical role in stimulating O-methyltransferases enzymatic activity and regulating 2,4,6-TCP bioconversion in water was established. The kinetic expressions formulated were later applied to develop a novel EPANET-MSX-based multi-species reactive-transport (MSRT) model. The effects of operating conditions and temperature in directing the microbiological, chemical, and organoleptic quality variations in WDSs were analyzed using the MSRT model on two benchmark systems. The simulation results specified chlorine application’s implication in maintaining 2,4,6-TCA levels within its perception limit (4 ng/L). In addition, the temperature sensitivity of O-methyltransferases enzymatic activity was described, and the effect of temperature increase from 10 to 25 °C in accelerating the 2,4,6-TCA formation rate in WDSs was explained. Controlling source water 2,4,6-TCP concentration by accepting appropriate treatment techniques was recommended as the primary strategy for regulating the T&O problems in WDSs. View Full-Text
Keywords: 2,4,6-trichloroanisole; 2,4,6-trichlorophenol; taste and odor; microbial O-methylation; water quality; EPANET-MSX 2,4,6-trichloroanisole; 2,4,6-trichlorophenol; taste and odor; microbial O-methylation; water quality; EPANET-MSX
►▼ Show Figures 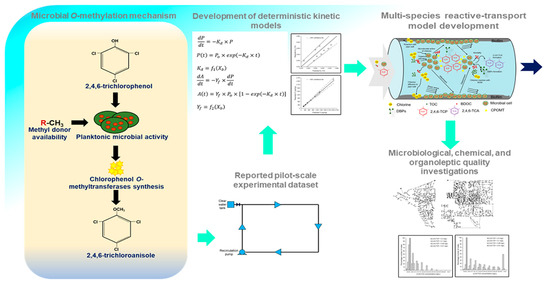