The Terraces of the Anti-Atlas: From Abandonment to the Risk of Degradation of a Landscape Heritage
Previous Article in Special Issue

Significant deviations from standard Boltzmann scaling, which corresponds to normal or Fickian diffusion, have been observed in the literature for water movement in porous media. However, as demonstrated by various researchers, the widely used conventional Richards equation cannot mimic anomalous diffusion and ignores the features of natural soils which are heterogeneous. Within this framework, governing equations of transient water flow in porous media in fractional time and multi-dimensional fractional soil space in anisotropic media were recently introduced by the authors by coupling Brooks–Corey constitutive relationships with the fractional continuity and motion equations. In this study, instead of utilizing Brooks–Corey relationships, empirical expressions, obtained by least square fits through hydraulic measurements, were utilized to show the suitability of the proposed fractional approach with other constitutive hydraulic relations in the literature. Next, a finite difference numerical method was proposed to solve the fractional governing equations. The applicability of the proposed fractional governing equations was investigated numerically in comparison to their conventional counterparts. In practice, cumulative infiltration values are observed to deviate from conventional infiltration approximation, or the wetting front through time may not be consistent with the traditional estimates of Richards equation. In such cases, fractional governing equations may be a better alternative for mimicking the physical process as they can capture sub-, super-, and normal-diffusive soil water flow processes during infiltration. View Full-Text
Keywords: fractional governing equations; non-Boltzmann scaling; non-Fickian transport; anomalous diffusion; sub-diffusion; super-diffusion fractional governing equations; non-Boltzmann scaling; non-Fickian transport; anomalous diffusion; sub-diffusion; super-diffusion
►▼ Show Figures 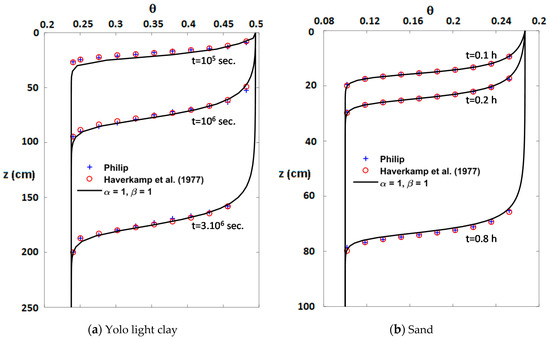