This study assessed natural variation in the macroinvertebrate assemblages (MIB) and water quality in one of the main basins with the largest agricultural activities in Chile (Aconcagua River Basin). We sampled throughout the annual cycle; nine sampling sites were established along the basin, classifying according to agricultural area coverage as least-disturbed, intermediate, and most-disturbed. We collected 56 macroinvertebrate taxa throughout the entire study area. Multivariate analysis shows significant differences among the three disturbance categories in different seasons, both water quality variables and the MIB structure. Distance-based linear model (DistLM) analysis for all seasons explained more than 95.9% of the macroinvertebrate assemblages, being significantly explained by chemical oxygen demand, pH, total coliforms, nitrites, elevation, and water temperature. ANOVA test revealed significant differences in the proportion of noninsect individuals, macroinvertebrates density, and the number of taxa among the three disturbance categories (p < 0.05). In general, water temperature, conductivity, chemical oxygen demand, ammonium, nitrites, and nitrates increased their values downstream in the basin. Our results indicate that the elevation gradient and increment in agricultural land use in the basin had a strong influence on water quality and MIB. A better understanding of these ecosystems could help conservation and integrated watershed management. View Full-Text
Keywords: Aconcagua; longitudinal pattern; biodiversity; bioindicators; MIB Aconcagua; longitudinal pattern; biodiversity; bioindicators; MIB
►▼ Show Figures 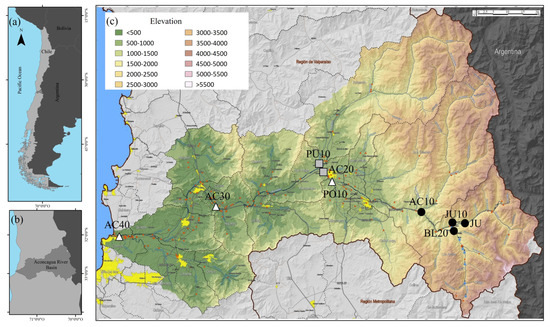