The Bohai Bay basin, mainly formed in the Cenozoic, is an important storehouse of groundwater in the North China Plain. The sedimentary deposits transported by paleocurrents often provided favorable conditions for the enrichment of modern liquid reservoirs. However, due to limited seismic and well logging data, studies focused on the macroscopic directions of paleocurrents are scarce. In this study, we obtained a series of well logging data for the sedimentary layers of Es3L Formation in the Chezhen depression. The results indicate the sources of paleocurrents from the northeast, northwest, and west to a center of subsidence in the northern Chezhen depression at that time. Based on the well testing data, the physical properties of the layers from Es3L Formation in this region were generally poor, but two abnormal overpressure zones were found at 3700–3800 m and 4100–4300 m deep intervals, suggesting potential high-quality underground liquid reservoirs. By combining with other geological evidence, we suggest that the Pacific Plate was retreating and changing its direction from NE–SE to W–E and the Bohai–Luxi block was suffering an extrusion from NE induced by the Lan–Liao and Tan–Lu strike-slip faults in the early Paleogene. View Full-Text
Keywords: well logging; paleocurrent; provenance; Bohai Bay basin; Pacific Plate; Tan–Lu strike-slip fault well logging; paleocurrent; provenance; Bohai Bay basin; Pacific Plate; Tan–Lu strike-slip fault
►▼ Show Figures 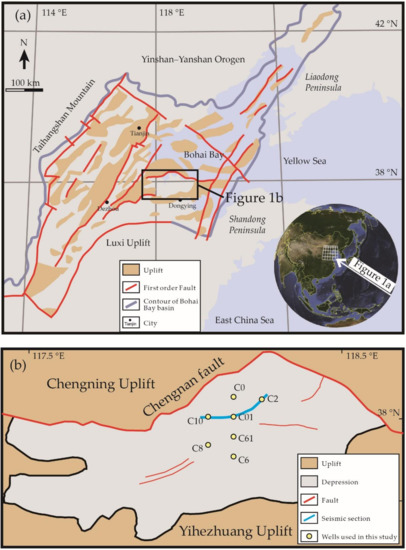 
Gao Y, Li F, Shi S, Chen Y. Determination of Paleocurrent Directions Based on Well Logging Technology Aiming at the Lower Third Member of the Shahejie Formation in the Chezhen Depression and Its Implications. Water. 2021; 13(4):408. https://doi.org/10.3390/w13040408


Gao, Yangjun; Li, Furong; Shi, Shilong; Chen, Ye. 2021. "Determination of Paleocurrent Directions Based on Well Logging Technology Aiming at the Lower Third Member of the Shahejie Formation in the Chezhen Depression and Its Implications" Water 13, no. 4: 408. https://doi.org/10.3390/w13040408