Arsenic (As) removal plants were installed in As-endemic areas of Bangladesh to remove As from well water. In many cases, these removal plants did not perform satisfactorily. This study evaluated the efficiency of 20 As and iron (Fe) removal plants (AIRPs) during pre- and post-monsoon conditions in rural Bangladesh. Results revealed that As removal efficiencies ranged from 67% to 98% and 74 to 93% during the pre- and post-monsoons periods, respectively. In the post-monsoon season As removal at individual AIRP sites was on average (4.01%) greater than in the pre-monsoon season. However, two removal plants were unable to remove As below 50 µg L−1 (Bangladesh drinking water standard) during pre-monsoon, while 11 samples out of 20 were unable to remove As below the WHO provisional guideline value of 10 µg L−1. During post-monsoon, none of the samples exceeded 50 µg L−1, but eight of them exceeded 10 µg L−1. The Fe removal efficiencies of AIRPs were evident in more than 80% samples. Although As removal efficiency was found to be substantial, a cancer risk assessment indicates that hazard quotient (HQ) and carcinogenic risk (CR) of As in treated water for adults and children are above the threshold limits. Thus, additional reductions of As concentrations in treated water are needed to further reduce the excess cancer risk due to As in drinking water. Since 55% and 40% of the AIRPs were unable to remove As < 10 µg L−1 during pre-monsoon and post-monsoon, further improvement including changes in AIRP design, regular cleaning of sludge, and periodic monitoring of water quality are suggested. Future research is needed to determine whether these modifications improve the performance of AIRPs. View Full-Text
Keywords: arsenic; iron; groundwater; low-cost technology; water treatment arsenic; iron; groundwater; low-cost technology; water treatment
►▼ Show Figures 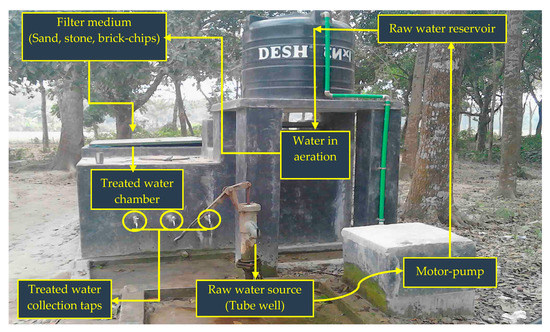