This work investigates the inter-relationships among stream water quality indicators, hydroclimatic variables (e.g., precipitation, river discharge), and land characteristics (e.g., soil type, land use), which is crucial to developing effective methods for water quality protection. The potential of using statistical tools, such as Principal Component (PC) and Granger causality analyses, for this purpose is assessed across 10 watersheds in the Eastern United States. The PC analysis shows consistency across the ten locations, with most of the variation explained by the first two PCs, except for the least developed watershed that presents three PCs. Results show that stronger Granger causality relationships and correlation coefficients are identified when considering a lag of one day, compared to longer lags. This is mainly due to the watersheds’ limited size and, thus, their fast hydrological response. The strongest Granger causalities are observed when water temperature and dissolved oxygen concentration are considered as the effect of the other variables, which corroborates the importance of these two water properties. This work also demonstrates how watershed size and land use can impact causalities between hydrometeorological variables and water quality, thus, highlighting how complex these relationships are even in a region characterized by overall similar climatology. View Full-Text
Keywords: principal component analysis; Granger causality; watershed; water quality; urbanization; land cover principal component analysis; Granger causality; watershed; water quality; urbanization; land cover
►▼ Show Figures 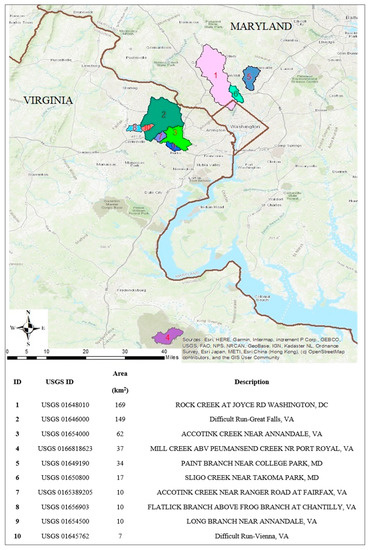