MAPKs and HSPs’ Activation of a Natural Daphnia magna Population in a Man-Perturbed Lake: Implications of Ecological Significance

Natural and anthropogenic pressures in inland waters induce molecular response mechanisms in organisms as a defense against such multiple stressors. We studied, for the first time, the expression of the stress proteins, heat shock proteins (HSP) and mitogen-activated proteins kinase (MAPK), in a Daphnia magna natural population as a response to environmental changes in a heavily modified water body (Lake Koronia, Northern Greece). In parallel, the water physicochemical parameters, nutrients’ concentration and phytoplankton abundance were measured. Our results showed fluctuations of the proteins’ levels (HSP70, HSP90, phospho-p38 MAPK, phospho-p44/42 MAPK) providing evidence of their expression in situ. HSP70 showed an increasing tendency while for HSP90, no tendency was recorded. The MAPKs’ members followed a reverse pattern compared to each other. The differential expression of HSP and MAPK members indicates that D. magna in Lake Koronia experienced stressors such as increasing temperature, salinity and increased nutrient concentrations, high pH values and variations in phytoplankton abundance that triggered their activation. These in situ findings suggest that HSP and MAPK expression patterns have the potential to be used as biomarkers of stress factors in D. magna, for effective biomonitoring and setting ecological restoration targets. View Full-Text
Keywords: Cladocera; HSP70; HSP90; p-p38 MAPK; p-p44/42 MAPK; Lake Koronia; Greece Cladocera; HSP70; HSP90; p-p38 MAPK; p-p44/42 MAPK; Lake Koronia; Greece
►▼ Show Figures 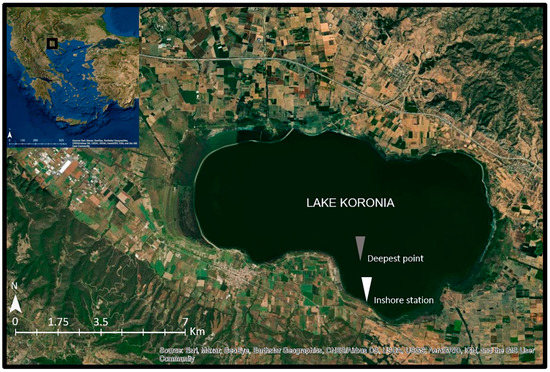