Tropical Andean glaciers are retreating rapidly, with possible consequences for trophic structure and ecosystem processes in high Andean meltwater streams. Here, we measured the environmental characteristics, quantified pools of particulate organic matter (POM) and periphyton (Chl. a), sampled benthic macroinvertebrates, determined functional feeding groups (FFG), and performed mesh bag decomposition experiments with Calamagrostis grass detritus at 17 stream sites along a gradient of glacial influence (GI) with 0–23% glacier cover in the catchment at 4050–4200 m a.s.l. in the Andes of Ecuador. POM was unrelated to GI while Chl. a. showed a weak (non-significant) negative relationship to GI. The macrofauna abundance decreased while taxon richness and the number of FFGs per site showed a hump-shaped relationship with increasing GI. Taxa with an opportunistic and generalist feeding mode generally dominated benthic assemblages and were related to high GI levels and low Chl. a. Only shredders were negatively related to GI, but unrelated to POM. Decomposition rates were comparable to those found in temperate alpine streams, and for both fine (0.0010–0.0065; median 0.0028 d−1) and coarse (0.0019–0.0088; median 0.0048 d−1) mesh bags, peaked at intermediate GI values, while the difference between bag types was small and almost constant along the GI gradient. This indicates an overall minor effect of macroinvertebrate shredders compared to that of microbes, in particular at high GI. It also suggests that the relatively high average temperature of these high-altitude equatorial streams (7–10 °C) does not produce higher decomposition rates than those in comparable but colder streams at temperate latitudes. The results suggest that, at the lower end of glacier cover, tropical glacier loss will not change the dominant microbial role in detritus decomposition, but that part of the physical abrasion could be partially replaced by biological shredding. View Full-Text
Keywords: Andes; tropical alpine streams; glacier influence; glacial retreat; benthic fauna; macroinvertebrates; functional feeding groups; decomposition Andes; tropical alpine streams; glacier influence; glacial retreat; benthic fauna; macroinvertebrates; functional feeding groups; decomposition
►▼ Show Figures 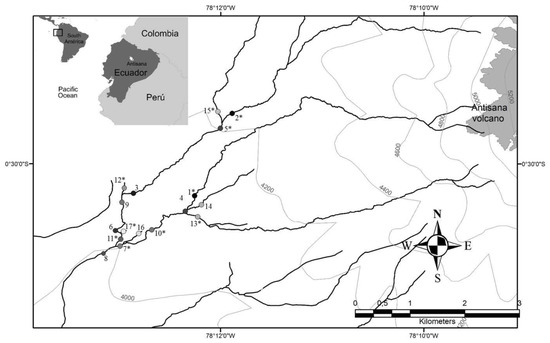