Multi-Indices Assessment of Origin and Controlling Factors of Trace Metals in River Sediments from a Semi-Arid Carbonated Basin (the Sebou Basin, Morocco)
Previous Article in Journal

Springs are unique aquatic environments that support specific biota, including endemic species and rare species listed in Red Lists. Due to their usually small size, springs are highly sensitive to disturbance. Many of them are threatened by aquifer depletion, contamination, surface-water diversion, livestock trampling, recreation, and invasive species. The aim of this study was to assess the colonization success of the invasive New Zealand mud snail (Potamopyrgus antipodarum) in a cold spring ecosystem in southern Poland. In Europe, this species has recently been added to the top “hundred worst” alien species due to its impact on invaded ecosystems. The study was carried out in two areas of the spring ecosystem—in the springhead and the springbrook—over a four-year period. Potamopyrus antipodarum dominated the benthic macroinvertebrate communities in both areas of the spring ecosystem. Nevertheless, its abundance in the springbrook was significantly greater, and increased noticeably during subsequent years compared to that in the springhead. The populations of P. antipodarum were exclusively composed of females. Smaller-sized New Zealand mudsnails were more abundant near the spring’s source than at the second site. The females at the springhead became fecund at sizes as small as 3.7 mm (the number of embryos was between 0 and 37), while at the springbrook, embryos were found in snails as small as 3.4 mm (the number of embryos was between 0 and 42). Our results suggest that the lower water temperature at the springhead may limit the population size of P. antipodarum, thus making its density too low to be able to affect the community structure of benthic macroinvertebrates, including the spring snail Bythinella cf. austriaca. View Full-Text
Keywords: invasive alien species; cold spring ecosystem; spring fauna; spring threats invasive alien species; cold spring ecosystem; spring fauna; spring threats
►▼ Show Figures 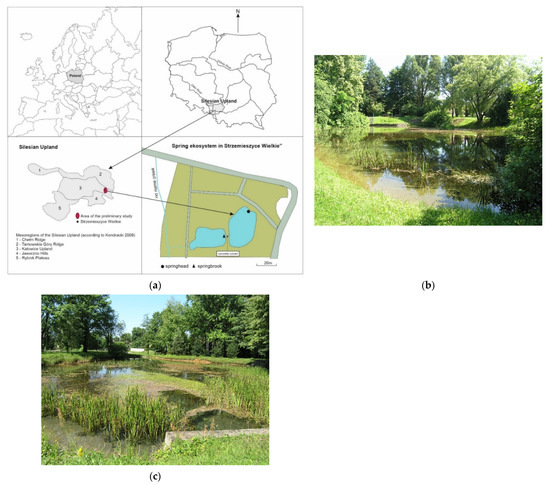