Exploring Cruise Tourists’ Preferences and Satisfaction: The Case of Taiwan
Next Article in Special Issue

The Alliance of Community-Owned Water Services in Europe: Opportunities and Challenges Based on the Irish Perspective
Previous Article in Special Issue

After the Storm: Fate and Leaching of Particulate Nitrogen (PN) in the Fluvial Network and the Influence of Watershed Sources and Moisture Conditions

Large storms can erode, transport, and deposit substantial amounts of particulate nitrogen (PN) in the fluvial network. The fate of this input and its consequence for water quality is poorly understood. This study investigated the transformation and leaching of PN using a 56-day incubation experiment with five PN sources: forest floor humus, upland mineral A horizon, stream bank, storm deposits, and stream bed. Experiments were subjected to two moisture regimes: continuously moist and dry–wet cycles. Sediment and porewater samples were collected through the incubation and analyzed for N and C species, as well as the quantification of nitrifying and denitrifying genes (amoA, nirS, nirK). C- and N-rich watershed sources experienced decomposition, mineralization, and nitrification and released large amounts of dissolved N, but the amount of N released varied depending on the PN source and moisture regime. Drying and rewetting stimulated nitrification and suppressed denitrification in most PN sources. Storm deposits released large amounts of porewater N regardless of the moisture conditions, indicating that they could readily act as N sources under a variety of conditions. The inputs, processing, and leaching of large, storm-driven PN inputs become increasingly important as the frequency and intensity of large storms is predicted to increase with global climate change. View Full-Text
Keywords: nitrogen; particulate organic matter; fluvial deposition; storms; mineralization; nitrification; denitrification; water quality; floodplain nitrogen; particulate organic matter; fluvial deposition; storms; mineralization; nitrification; denitrification; water quality; floodplain
►▼ Show Figures 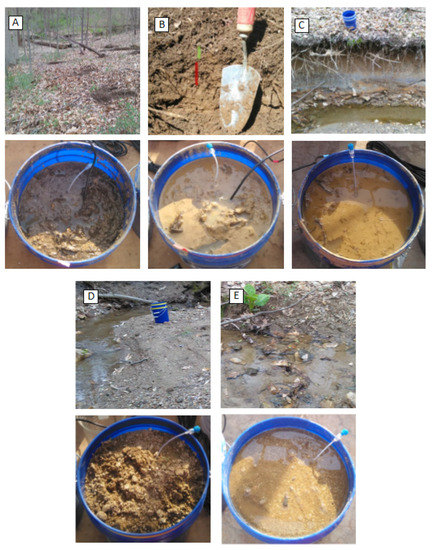