In October 2016, Public Health England was initially notified of four cases of cryptosporidiosis among users of two swimming pools. We investigated to identify further cases, the outbreak source, and ensure the implementation of appropriate control measures. Probable primary cases had diarrhoea and reported swimming in the pools 1–12 days prior to illness; confirmed cases were verified by the reference laboratory. Secondary cases had contact with primary cases 1–12 days prior to illness. We identified twenty-two cases: eleven were primary (eight confirmed) and eleven were secondary (five confirmed). Four cases were infected with C. parvum (different gp60 subtypes); all were primary and swam at two pools. Seven primary and secondary cases were infected with C. hominis gp60 subtype IdA16, and all were associated one pool. Failings in pool water treatment and management were identified that likely contributed to the load on the filters and their efficiency. Our investigation identified a complex outbreak, with secondary transmission, involving exposures to two swimming pools. C. hominis IdA16 is rare; it has been isolated from only three previous UK cases. We hypothesize that C. hominis cases arose from a common exposure, and the C. parvum cases were likely sporadic. This investigation highlights the value of integrating epidemiology and microbiology to investigate clusters of Cryptosporidium cases, defining the extent of the outbreak and the likely transmission pathways. View Full-Text
Keywords: Cryptosporidium; typing; outbreaks; swimming pools; gp60 Cryptosporidium; typing; outbreaks; swimming pools; gp60
►▼ Show Figures 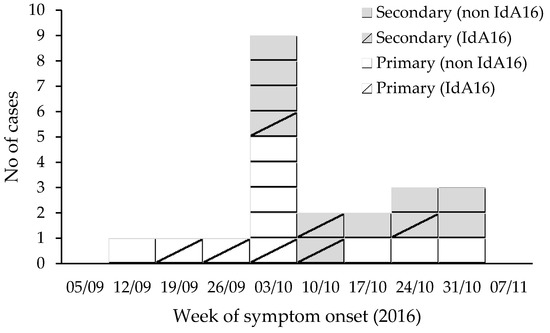