Soil moisture is a critical variable influencing plant water uptake, rainfall-runoff partitioning, and near-surface atmospheric conditions. Soil moisture measurements are typically made using either in-situ sensors or by collecting samples, both methods which have a small spatial footprint or, in recent years, by remote sensing satellites with large spatial footprints. The cosmic ray neutron sensor (CRNS) is a proximal technology which provides estimates of field-averaged soil moisture within a radius of up to 240 m from the sensor, offering a much larger sensing footprint than point measurements and providing field-scale information that satellite soil moisture observations cannot capture. Here we compare volumetric soil moisture estimates derived from a novel, less expensive lithium (Li) foil-based CRNS to those from a more expensive commercially available 3He-based CRNS, to measurements from in-situ sensors, and to four intensive surveys of soil moisture in a field with highly variable soil texture. Our results indicate that the accuracy of the Li foil CRNS is comparable to that of the commercially available sensors (MAD = 0.020 m3 m−3), as are the detection radius and depth. Additionally, both sensors capture the influence of soil textural variability on field-average soil moisture. Because novel Li foil-based CRNSs are comparable in accuracy to and much less expensive than current commercially available CRNSs, there is strong potential for future adoption by land and water managers and increased adoption by researchers interested in obtaining field-scale estimates of soil moisture to improve water conservation and sustainability. View Full-Text
Keywords: cosmic ray neutron sensor; soil moisture; lithium foil cosmic ray neutron sensor; soil moisture; lithium foil
►▼ Show Figures 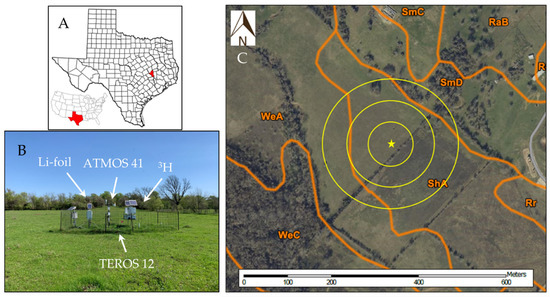