Differences in the Proportional Contributions of Particulate Radiocesium Sources under Base- and High-Flow River Conditions: A Case Study in the Central Region of Fukushima

Due to the Fukushima Daiichi Nuclear Power Plant accident in 2011, large amounts of radiocesium were deposited over forest ecosystems in the headwater regions of rivers in Fukushima Prefecture, Japan. There is considerable concern about whether the runoff from these regions will result in recontamination of lower-lying areas further downstream after heavy rainfall events and typhoons. This study examined the sources and levels of cesium-137 (137Cs), the most abundant radioisotope in river sediments, in total suspended solids (TSS) in river water. In addition, changes in the predominant source of TSS associated with changes in river conditions were investigated. The properties of total organic carbon (TOC) in TSS (concentrations and isotopic compositions) were also measured to identify differences among sources. The results showed reductions in 137Cs and TOC properties in TSS when the river conditions changed from base flows to high flows, indicating the existence of a dilution effect through the addition of mineral particles from extraneous sources. Simulation results obtained using a mixing model suggested that forest soils are the primary source of TSS regardless of river conditions, but that the relative contribution of TSS from forest soils was decreased under high-flow conditions. Meanwhile, the relative contributions of both riverbank soil and river sediments were increased under high-flow conditions. Due to the low 137Cs concentrations in riverbank soils and river sediments, it is unlikely that heavy rainfall events will cause serious recontamination of areas downstream in the study area. View Full-Text
Keywords: suspended solids; cesium-137; stable carbon isotope; mixing model suspended solids; cesium-137; stable carbon isotope; mixing model
►▼ Show Figures 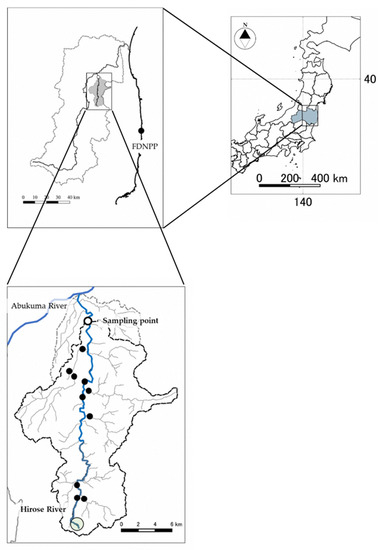 
Arai, Hirotsugu, Kazuki Fujita, Hirofumi Yoshita, and Keisuke Taniguchi. 2021. "Differences in the Proportional Contributions of Particulate Radiocesium Sources under Base- and High-Flow River Conditions: A Case Study in the Central Region of Fukushima" Water 13, no. 21: 3021. https://doi.org/10.3390/w13213021