SWMM-UrbanEVA: A Model for the Evapotranspiration of Urban Vegetation

Typhoon Hagibis, which occurred at the beginning of October 2019, was one of the largest and most powerful tropical cyclones and was considered to be the most devastating typhoon to hit Japan in recorded history. Extreme heavy rainfall caused massive impacts to Japan in general and to Marumori Town, Miyagi Prefecture in particular. In the present study, the detailed flood characteristics at Marumori Town were investigated by using field observation and numerical simulations. The obtained data immediately after the flood has clearly shown that most levee breaches were caused by the water overflow on the river embankment at the constriction areas such as the tributaries’ junction and the intersection of the river embankment. Numerical simulations were performed to investigate the mechanism of levee breaching in Marumori Town. According to the simulation results, the flooding water from the upstream levee breach locations flowed into the paddy field area and caused the levee to breach at the river embankment interaction in the downstream area. A new levee breach criterion in terms of overflow depth and its duration on the river embankment was proposed. In addition, a sensitivity analysis was also performed to understand the effect of the backwater and phase lag of water level rise between the mainstream and tributaries. Although there have been many studies on flood disasters, the typhoon’s flood-induced disasters on the river and coastal infrastructures have still remained a big challenge. The present study outcomes provide useful information not only to understand how the river embankment of tributaries is vulnerable to water level rise, but also to support the river authorities to prepare better mitigation plans for future flood disasters. View Full-Text
Keywords: Typhoon Hagibis; flood disaster; Marumori Town; heavy rainfall; levee breach; overflow; backwater Typhoon Hagibis; flood disaster; Marumori Town; heavy rainfall; levee breach; overflow; backwater
►▼ Show Figures 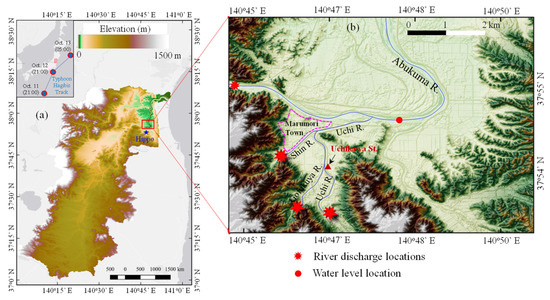