Fish Response to Multiple Anthropogenic Stressors in Mediterranean Coastal Lagoons: A Comparative Study of the Role of Different Management Strategies

Sectorization is an effective technique for reducing the complexities of analyzing and managing of water systems. The resulting sectors, called district metering areas (DMAs), are expected to meet some requirements and performance criteria such as minimum number of intervention, pressure uniformity, similarity of demands, water quality and number of districts. An efficient methodology to achieve all these requirements together and the proper choice of a criteria governing the sectorization is one of the open questions about optimal DMAs design. This question is addressed in this research by highlighting the advantages of three different criteria when applied to real-word water distribution networks (WDNs). To this, here it is presented a two-stage approach for optimal design of DMAs. The first stage, the clustering of the system, is based on a Louvain-type greedy algorithm for the generalized modularity maximization. The second stage, the physical dividing of the system, is stated as a two-objective optimization problem that utilises the SMOSA version of simulated annealing for multiobjective problems. One objective is the number of isolation valves whereas for the second objective three different performance indices (PIs) are analyzed and compared: (a) standard deviation, (b) Gini coefficient and (c) loss of resilience. The methodology is applied to two real case studies where the first two PIs are optimized to address similar demands among DMAs. The results demonstrate that the proposed method is effective for sectorization into independent DMAs with similar demands. Surprisingly, it found that for the real studied systems, loss of resilience achieves better performance for each district in terms of pressure uniformity and demand similarity than the other two specific performance criteria. View Full-Text
Keywords: water network partitioning; water network sectorization; district metered area; community structure; multi-objective optimization; simulated annealing water network partitioning; water network sectorization; district metered area; community structure; multi-objective optimization; simulated annealing
►▼ Show Figures 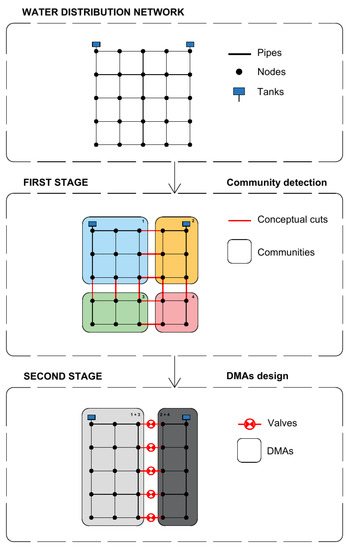