Impact of Nutrients, Temperatures, and a Heat Wave on Zooplankton Community Structure: An Experimental Approach

Global changes (e.g., warming and population growth) affect nutrient loadings and temperatures, but global warming also results in more frequent extreme events, such as heat waves. Using data from the world’s longest-running shallow lake experimental mesocosm facility, we studied the effects of different levels of nutrient loadings combined with varying temperatures, which also included a simulated 1-month summer heat wave (HW), on nutrient and oxygen concentrations, gross ecosystem primary production (GPP), ecosystem respiration (ER), net ecosystem production (NEP) and bacterioplankton production (BACPR). The mesocosms had two nutrient levels (high (HN) and low (LN)) combined with three different temperatures according to the IPCC 2007 warming scenarios (unheated, A2 and A2 + 50%) that were applied for 11 years prior to the present experiment. The simulated HW consisted of 5 °C extra temperature increases only in the A2 and A2 + 50% treatments applied from 1 July to 1 August 2014. Linear mixed effect modeling revealed a strong effect of nutrient treatment on the concentration of chlorophyll a (Chl-a), on various forms of phosphorus and nitrogen as well as on oxygen concentration and oxygen percentage (24 h means). Applying the full dataset, we also found a significant positive effect of nutrient loading on GPP, ER, NEP and BACPR, and of temperature on ER and BACPR. The HW had a significant positive effect on GPP and ER. When dividing the data into LN and HN, temperature also had a significant positive effect on Chl-a in LN and on orthophosphate in HN. Linear mixed models revealed differential effects of nutrients, Chl-a and macrophyte abundance (PVI) on the metabolism variables, with PVI being particularly important in the LN mesocosms. All metabolism variables also responded strongly to a cooling-low irradiance event in the middle of the HW, resulting in a severe drop in oxygen concentrations, not least in the HN heated mesocosms. Our results demonstrate strong effects of nutrients as well as an overall rapid response in oxygen metabolism and BACPR to changes in temperature, including HWs, making them sensitive ecosystem indicators of climate warming. View Full-Text
Keywords: climate change; extreme events; ecosystem processes; lake restoration climate change; extreme events; ecosystem processes; lake restoration
►▼ Show Figures 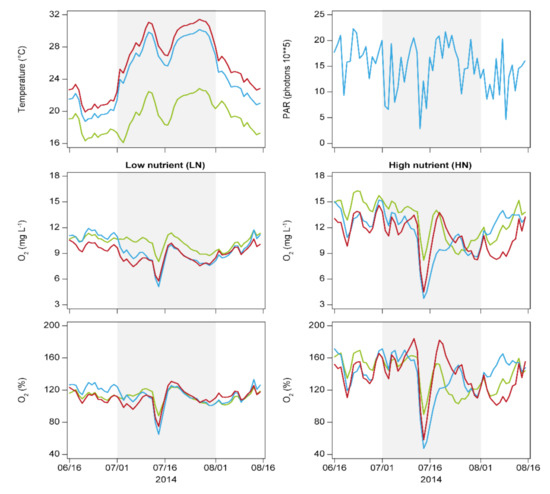