Earth’s ecosystems and human life depend on water, yet freshwater resources are rapidly depleting from unsustainable human activities [1]. Many regions of the world over-extract groundwater supplies, experience water stress, and have river systems without adequate freshwater flows [1]. Numerous economic activities, such as energy and food production, require large amounts of freshwater use [2]. The diminished freshwater supply is further complicated by poverty, conflict, diseases, and water quality issues [3].
The security of the freshwater supply in the United States (U.S.) is a growing concern [4] and is strained both locally and regionally [5]. Over 300 gallons of water, on average, are consumed per household per day in the U.S. even though daily basic human water needs are estimated to range from 15–25 gallons for one person [6,7]. Increasing public engagement in water resource protection behaviors is a challenging but essential task for environmental educators and communicators [8]. Education campaigns typically provide simple education around water conservation, which does not “move people to action” to conserve water [9] (p. 109). Thus, minimal environmental behavior changes have resulted from information-only water conservation campaigns in the U.S. [10,11,12,13]. Improving water conservation in the U.S. by focusing on individual and social factors is one crucial step in addressing the global water crisis [14,15,16].
During the Reagan administration in the 1980s, viewpoints of environmental protection shifted from a non-partisan issue to one viewed as harmful to the free market and economic growth by Republican leaders [17,18]. The political divide over environmental protection has continued to grow in recent decades [19], including water resource protection. Today, individuals who are politically conservative or belong to the Republican Party are generally not as concerned about the health of the environment as individuals who are politically liberal or belong to the Democratic Party [20,21]. According to [22], public engagement in water conservation behaviors increases when people are targeted with specific and appropriate information. Therefore, political affiliation and ideology may provide environmental communicators with a basepoint for effectively communicating water conservation behaviors with the public.
Conserving water in the household often involves water consumption reduction behaviors, such as turning off taps while brushing teeth and installing low-flow shower heads [23]. Numerous studies have investigated factors that predict household water consumption, including sociodemographic characteristics [1,24], attitudes and values [24,25,26], and water consumption behaviors [27]. However, previous literature forgoes the effect that an individual’s political affiliation and ideology may have on household water consumption. Environmental communicators need to understand how the public engages with environmental issues in order to effectively communicate about water conservation. Therefore, this study goes beyond past research to determine if individual political affiliation and ideology predicted household water conservation behaviors.

The study described here was part of a larger research effort conducted to determine public perceptions of water resources and climate change, see [54]. Four sections of the survey instrument were pertinent to this study: respondents’ political affiliation and ideology, attitude, subjective norms, and perceived behavioral control toward water conservation behaviors, and self-reported intent to engage in water conservation behaviors.

The survey instrument included demographic, semantic differential, and Likert-type questions. These measures are reported below.

Respondents’ attitudes about water conservation was determined using seven semantic differential items (on a five-point scale) adapted from [14]. Individuals were asked to indicate if they believed engaging in everyday actions to save water around the house and in their home landscape was:
Reliability was calculated post hoc (α = 0.92).

Self-reported intent to engage in water conservation behaviors in the future were measured by adapting a scale introduced by [21]. Respondents were asked to indicate their level of likelihood engaging in 20 water conservation behaviors using a five-point Likert scale (1 = Very Unlikely; 2 = Unlikely; 3 = Undecided; 4 = Likely; 5 = Very Likely). Respondents were also allowed to indicate if the behavior was not applicable to them. For example, if someone was asked when they water their lawn yet they live in an apartment, they would likely select “not applicable.” Intention items included how likely individuals were to: donate to an organization that protects water; join a water conservation organization; buy a specialty license plate that supports water protection efforts; only run the washing machine and dish washer when it is full; keep a timer in the bathroom to help them take a shorter shower; use biodegradable cleaning products, only water their lawn in the morning or evening; reduce the number of times a week they water their lawn; sweep patios and sidewalks instead of hosing them down; volunteer for a stream clean up or wetland restoration event; vote for candidates who support water conservation; reduce use of fertilizer and pesticides if their landscape quality would decrease; responsibly dispose of hazardous materials; avoid purchasing plants that require a lot of water, reduce their use of natural resources; visit state parks to learn about water issues; and support their water restrictions used by their local government in the future. Reliability of the scale was calculated post hoc (α = 0.95). If respondents selected Not Applicable to an item, they received a mean score based on the number of items answered rather than the entire set. Based on Cronbach α estimates, composite means were calculated for each TPB construct (i.e., attitudes, subjective norms, perceived behavioral control, and intention) within the model.

The entire instrument was reviewed for face and construct validity by a panel of faculty with expertise in survey design, natural resource conservation, and education research. The research design was approved by the University of Georgia Institutional Review Board (IRB #00001893) and the instrument was pilot tested with 50 individuals who were representative of the sample for content validity. All scales were deemed reliable based on Cronbach alpha coefficients in excess of 0.70. No changes were made to the instrument following the pilot test.

Data were collected from U.S. residents aged 18 years or older who were representative of the U.S. population based on geographic location, gender, age, and race/ethnicity. The data were weighted based on geographic location, gender, age, and race/ethnicity from the 2010 Census to ensure the respondents were representative of the population of interest [56]. Respondents were recruited using non-probability opt-in sampling methods via Qualtrics, an online survey platform. Non-probability opt-in sampling methods are often used for public opinion research but do limit access to those with internet access [57]. Post-stratification weighting methods were used to compensate for potential exclusion, selection, and non-participation biases [57].

A total of 1049 responses were collected and usable for analysis. The average respondent was White (72.4%), had at least a two-year college degree (59.2%), and had a total family income (before taxes) of less than USD 149,999 (85.4%; Table 1). Respondents’ sex was equally distributed between males (50%) and females (50%). Detailed demographic characteristics of the respondents can be viewed in Table 1.

In order to effectively engage individuals in water conservation behaviors, environmental communicators must disseminate specific and appropriate information to their clientele [21,22]. This study revealed political affiliation, political ideology, attitude, subjective norms, and perceived behavioral control predicted 27.5% of variance in respondents’ intent to engage in water conservation behaviors; however, the variance accounted for was mostly attributed to TPB variables. Gaining knowledge of how political affiliation and ideology offer opportunities and create barriers to water conservation is one step in gaining a perspective on how environmental communicators can use targeted efforts with specific groups to encourage water conservation. The results of this study, however, are preliminary and additional psychographic predictors (i.e., shared values) should be explored in conjunction with the TPB. Testing tailored messages and creating experiences based on political ideologies may capitalize on the power of subjective norms and assist in securing water for future generations.

The study was conducted according to the guidelines of the Declaration of Helsinki, and approved by the Institutional Review Board of The University of Georgia (IRB #00001893, 30 March 2020 date of approval).

Data are currently embargoed. Data will be released if the article is accepted and to reviewers upon request. 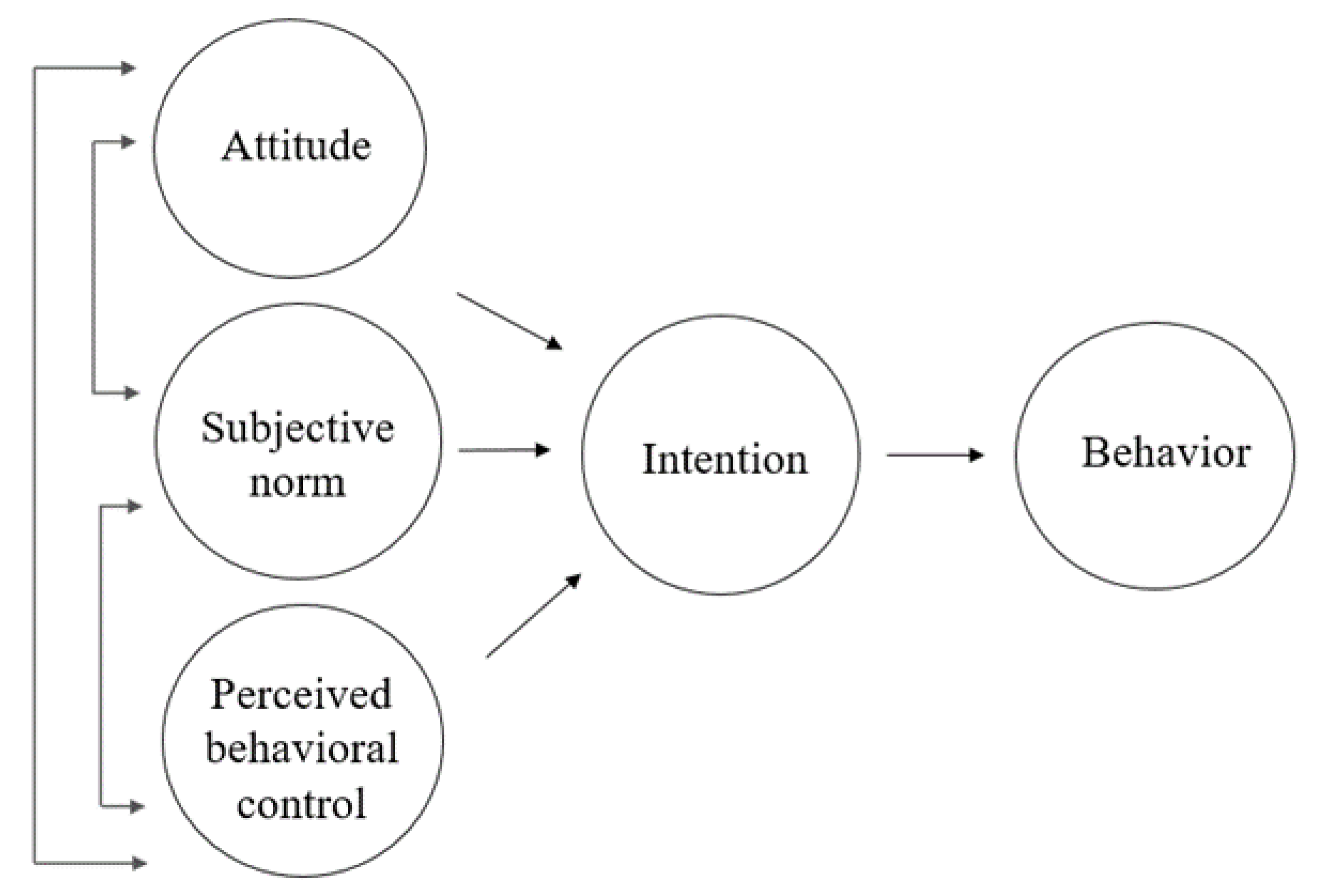 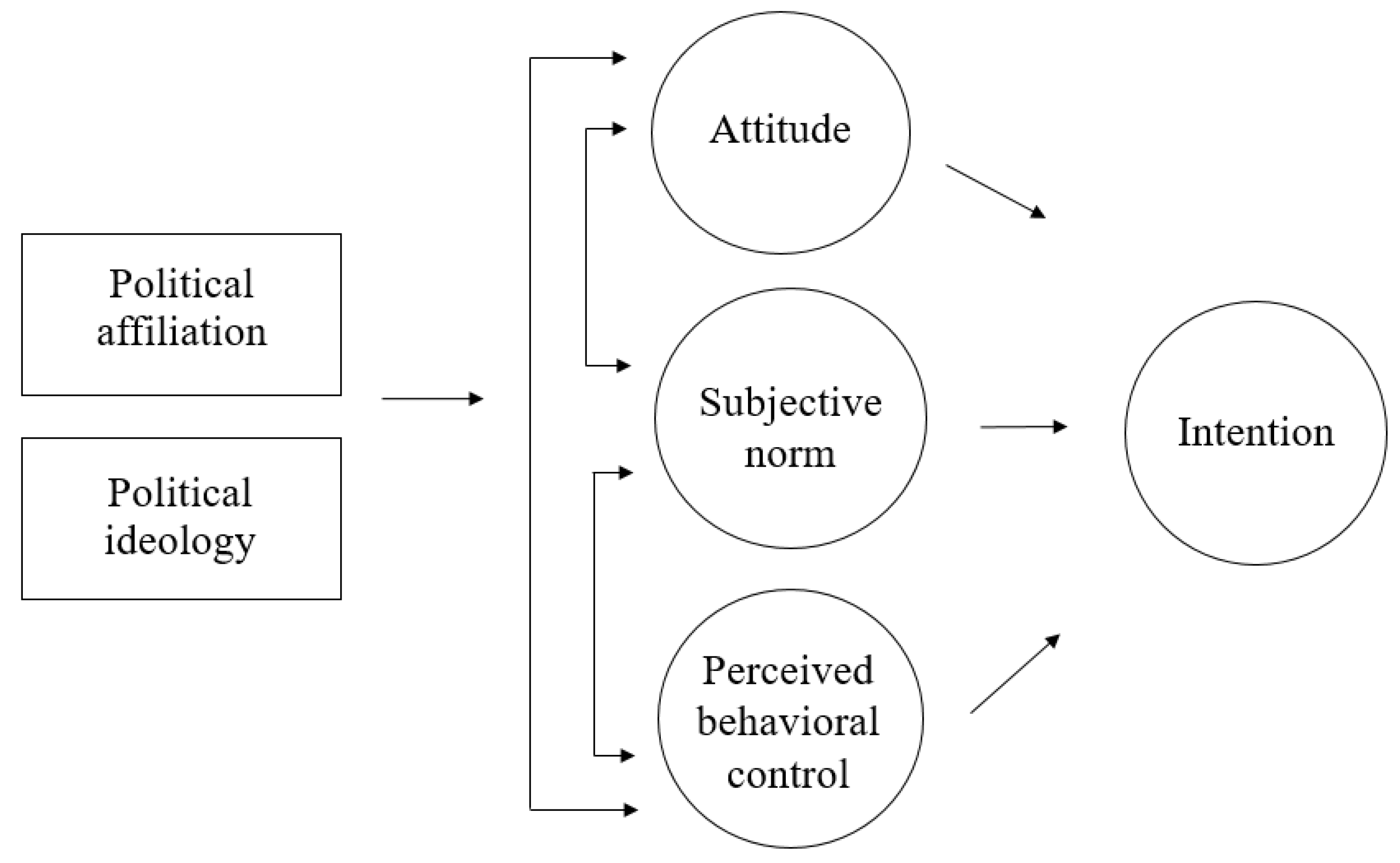 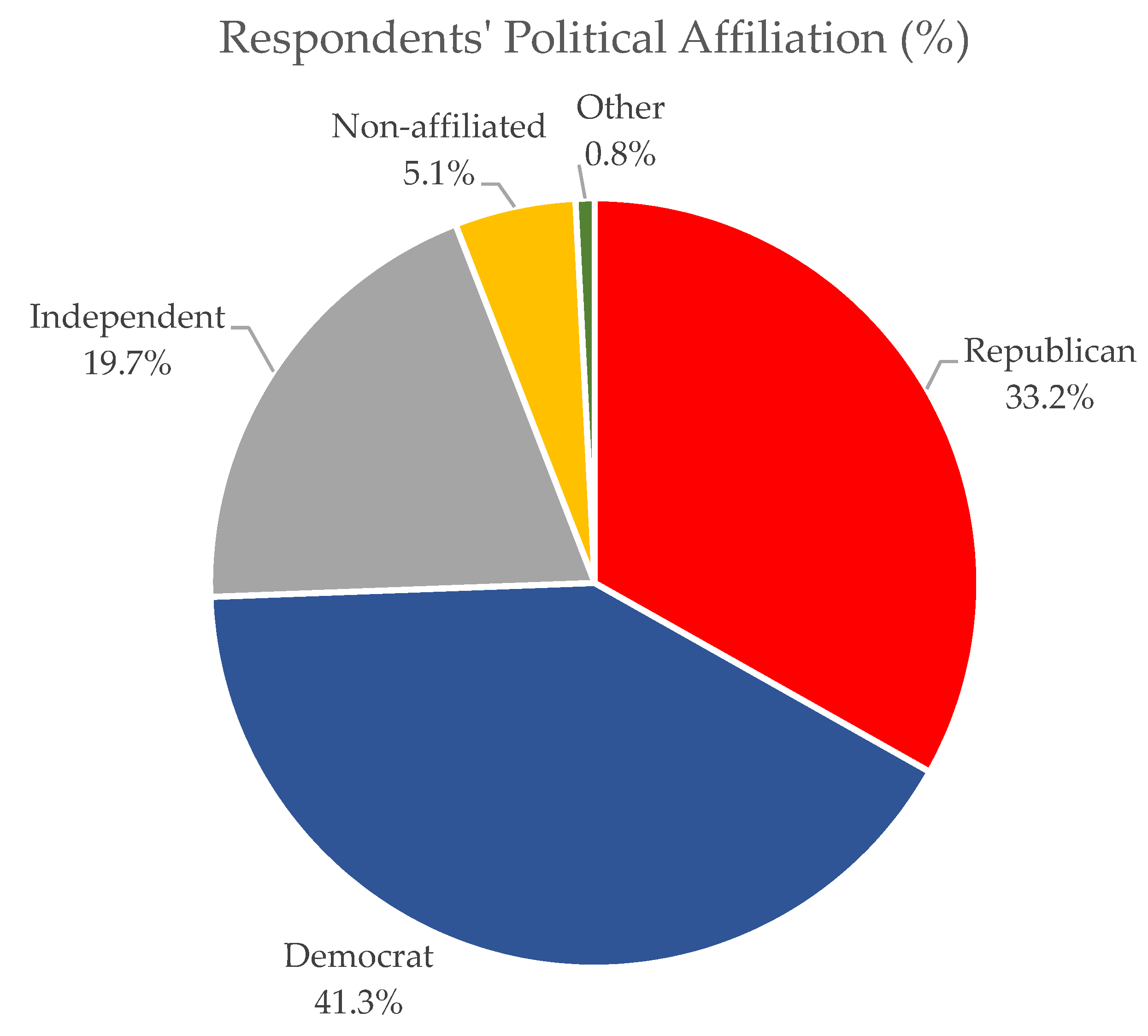 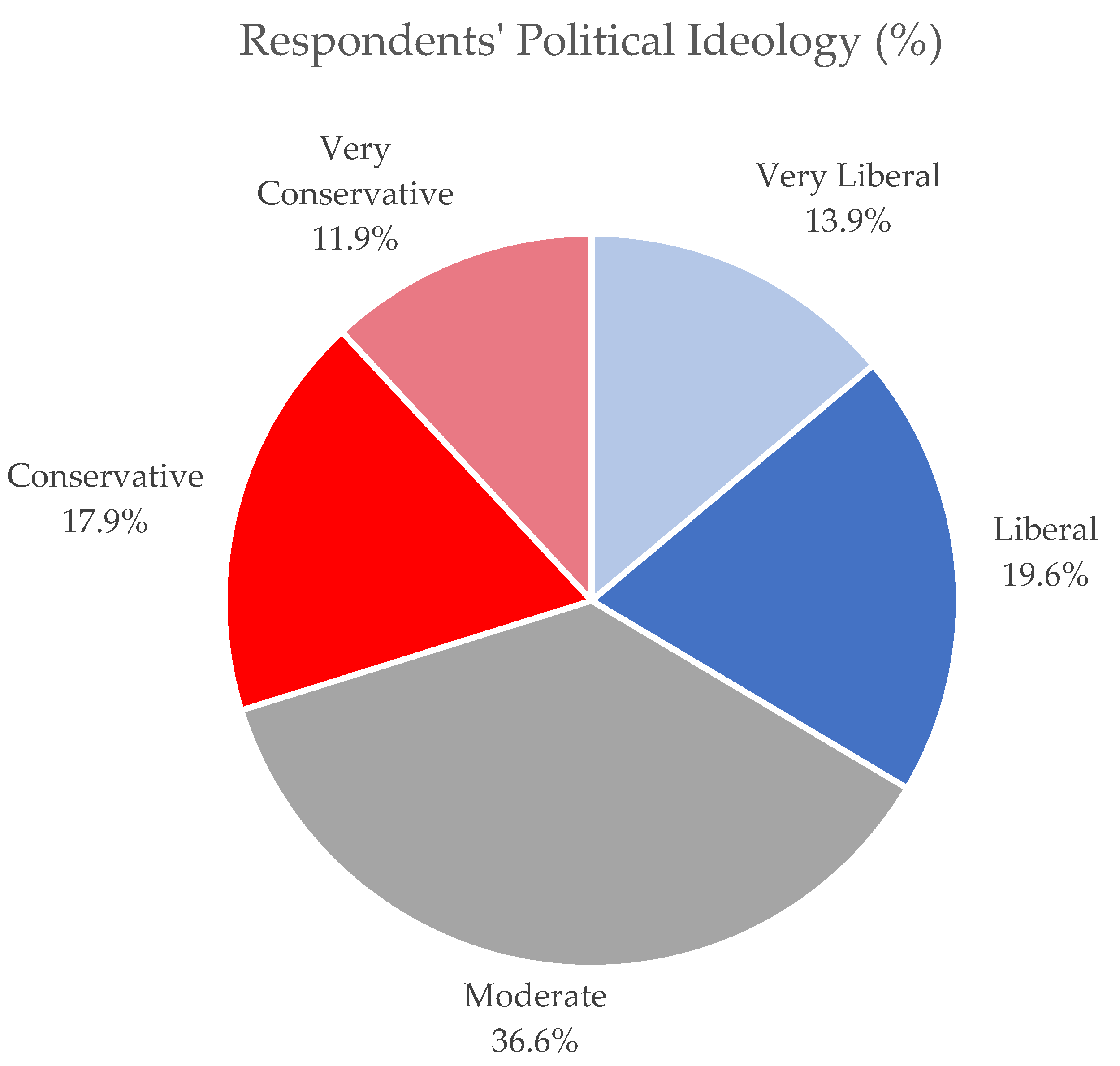