Improving Efficiency of Hydrological Prediction Based on Meteorological Classification: A Case Study of GR4J Model

:
Distribution of hydrological parameters is varied under contrasting meteorological conditions. However, how to determine the most suitable parameters on a predefined meteorological condition is challenging. To address this issue, a hydrological prediction method based on meteorological classification is established, which is conducted by using the standardized runoff index (SRI) value to identify three categories, i.e., the dry, normal and wet years. Three different simulation schemes are then adopted for these categories. In each category, two years hydrological data with similar SRI values are divided into a set; then, one-year data are used as the calibration period while the other year is for testing. The Génie Rural à 4 paramètres Journalier (GR4J) rainfall-runoff model, with four parameters x1, x2, x3 and x4, was selected as an experimental model. The generalized likelihood uncertainty estimation (GLUE) method is used to avoid parameter equifinality. Three basins in Australia were used as case studies. As expected, the results show that the distribution of the four parameters of GR4J model is significantly different under varied meteorological conditions. The prediction efficiency in the testing period based on meteorological classification is greater than that of the traditional model under all meteorological conditions. It is indicated that the rainfall-runoff model should be calibrated with a similar SRI year rather than all years. This study provides a new method to improve efficiency of hydrological prediction for the basin.
Keywords:
rainfall-runoff model; standardized runoff index; parameter distribution; meteorological classification; GR4J model

2.1. Rainfall-Runoff Model Based on Meteorological Classification

As shown in Figure 1, the main steps of the rainfall-runoff model based on meteorological classification are as follows:

The standardized runoff index (SRI) is a hydrological drought index constructed based on the principle of the standardized precipitation index (SPI). It is similar to SPI, assuming that the inner diameter flow conforms to a suitable probability distribution type in a certain period of time, and the SRI is obtained after normal standardization of runoff. The calculation method is to assume that the runoff in a certain period is x, and the probability density function of runoff (P—Ⅲ distribution) is as follows [28]: where α, β and a0 are shape, scale and position parameters, respectively, and α, β > 0; Γ (α) is gamma function. The L-moment method is used to calculate the values of α, β and a0, which are brought into the formula and integrated, and the cumulative frequency F(x) of each item is normalized to obtain the SRI value: where: when F ≤ 0.5, S = −1; when F > 0.5, S = 1; d1 = 1.43279, d2 = 0.18927, d3 = 0.00131, c0 = 2.51552, c1 = 0.80285, c2 = 0.010323.
In this study, the hydrological drought situation of the study basin was divided into three grades [29] according to SRI value (Table 1).

Génie Rural à 4 paramètres Journalier (GR4J) [30] is a conceptual rainfall-runoff model which has 4 free parameters only. In the model, two nonlinear reservoirs are used for runoff generation and confluence calculation. The first routing applies a single unit hydrograph and the second a unit hydrograph and nonlinear storage function. Groundwater exchanges with deeper aquifers and/or adjoining catchments are represented using a gain/loss function applied to each routing channel.
GR4J model consists of four parameters: x1, x2, x3 and x4. Its value range and specific meaning are listed in Table 2.
In this study, the Nash–Sutcliffe efficiency (NSE) criterion [31] was used to assess performance of models between training and testing periods. The NSE is defined as follows: where and represent simulated and observed daily runoff, respectively; is the mean observed streamflow for the estimation period, t is the time step and T is the length of the estimation period.

Previous studies suggest that parameter values sampled from different regions of the parameter space can provide equally effective simulation of system behavior [32]. However, parameter sets may perform quite well in the training period, but their test performance may be degraded under different conditions [33]. In addition, the parameters may show different distributions and sensitivities according to the different meteorological conditions experienced during the training period; these factors will affect the final prediction effect of the model.
In order to better sample the parameters and improve the effect of calibration and test, the uncertainty analysis of parameters should be carried out first. In this paper, the generalized likelihood uncertainty estimation (GLUE) method is adopted, which is a widely used Monte-Carlo-based model training and uncertainty evaluation method. The specific principle and steps of the GLUE method are detailed in reference [34]. In this study, uniform distribution is used as the prior distribution of parameters. In each experimental watershed, 10,000 groups of random parameter values are generated and brought into the model for calculation. In this paper, NSE value is used as the likelihood function, and the feasible likelihood function threshold is set to further screen the posterior distribution of parameters.

SRI values are used to identify a meteorological pattern in the historical data of three basins in Australia. In application, when the testing year was determined, the corresponding training period can be selected according to the closest SRI value:
According to this standard, the years with the closest SRI value under three patterns, most Wet/Normal/Dry, were set in one group, as shown in Figure 3. Taking the catchment ID 405264 as an example (Figure 3a), the two driest years screened by the meteorological classification algorithm are 1982 and 2006, the two wettest years are 1993 and 1996 and the two most normal years are 1988 and 2004.
The data period closest to SRI value is selected as a pair of tests target. Taking catchment ID 405219 as an example, since the annual SRI value of 1993 is the closest to 1996, which determined that the two-year meteorological conditions are consistent, they are set as a group. Thus, 1993 is the training period, while 1996 is the testing period. The obtained parameter group from 1993 is used for simulation in 1996; other grouping results of three experimental basins in Australia are shown in Table 3.

4.2. Comparison of the Posterior Distribution of Model Parameters under Different Meteorological Conditions

(1)
The distribution of hydrological parameters is varied under different meteorological conditions. However, they are similar for the two years with a proximately equal SRI value.
(2)
The rainfall-runoff model should be calibrated with a similar SRI year rather than all years. The prediction efficiency of the hydrological model based on meteorological classification is greater than that of the traditional model with all meteorological conditions. Especially in the extremely dry condition, in the test period of the three study basins, the prediction efficiency coefficients were increased 107%, 104% and 55.6%, respectively.

To evaluate the dry or wet conditions, many assessment indexes, such as surface water supply index (SWSI) and river streamflow dry index (SDI), etc., can be used. In future research, the comparison of different meteorological classification methods will be conducted to find the most scientific and reasonable meteorological classification method. A potential application is the runoff prediction under climatic change, where the precipitation is the force and the SRI can be predicted. In practical applications, methods such as the Mann–Kendell trend test and cross wavelet analysis can be used to predict the future meteorological pattern of the research basin and select the corresponding training period from the historical data.

This study was supported by the National Natural Science Foundation of China (Grant No. 51861125102).

Data are available from the authors on request. 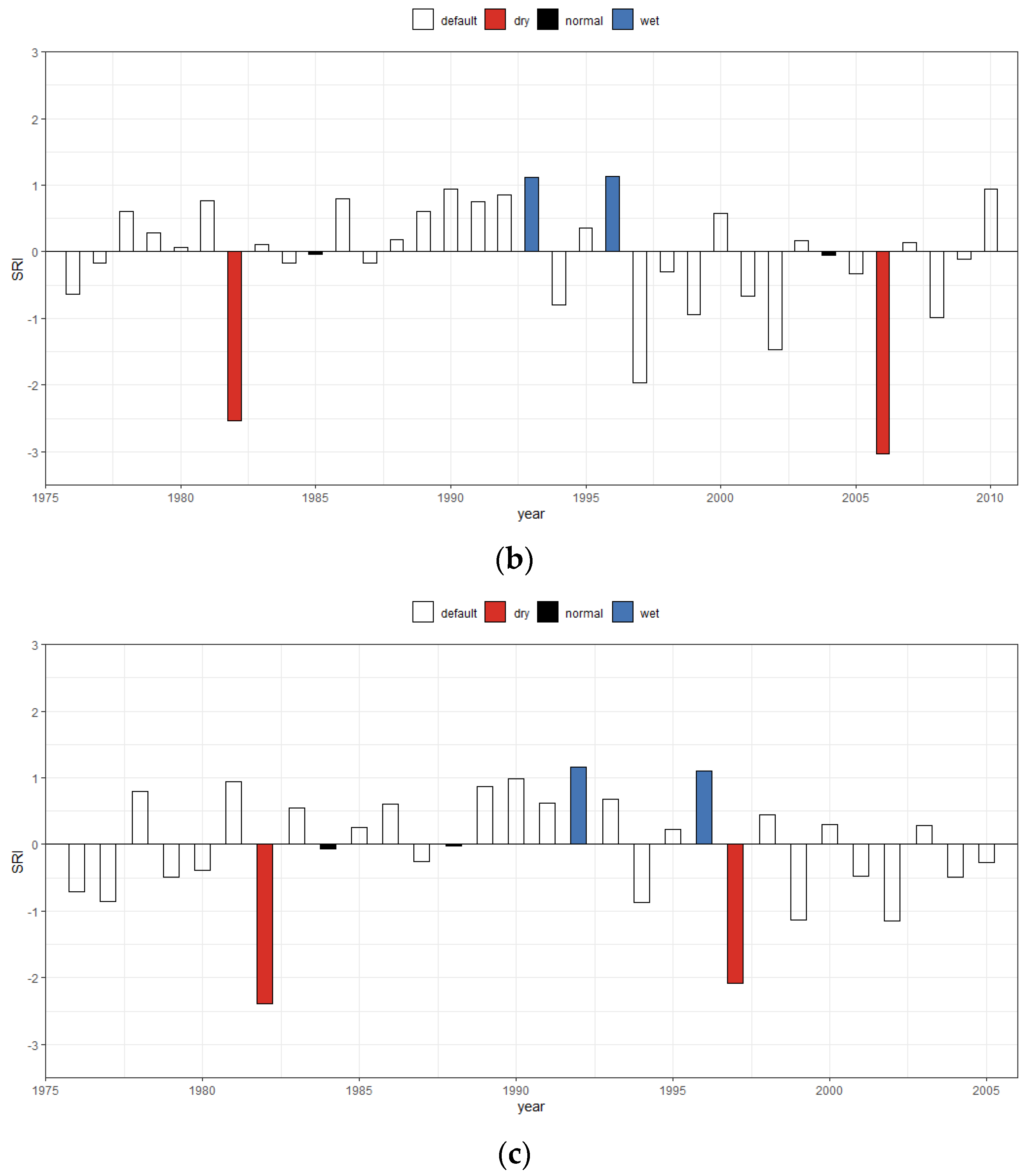 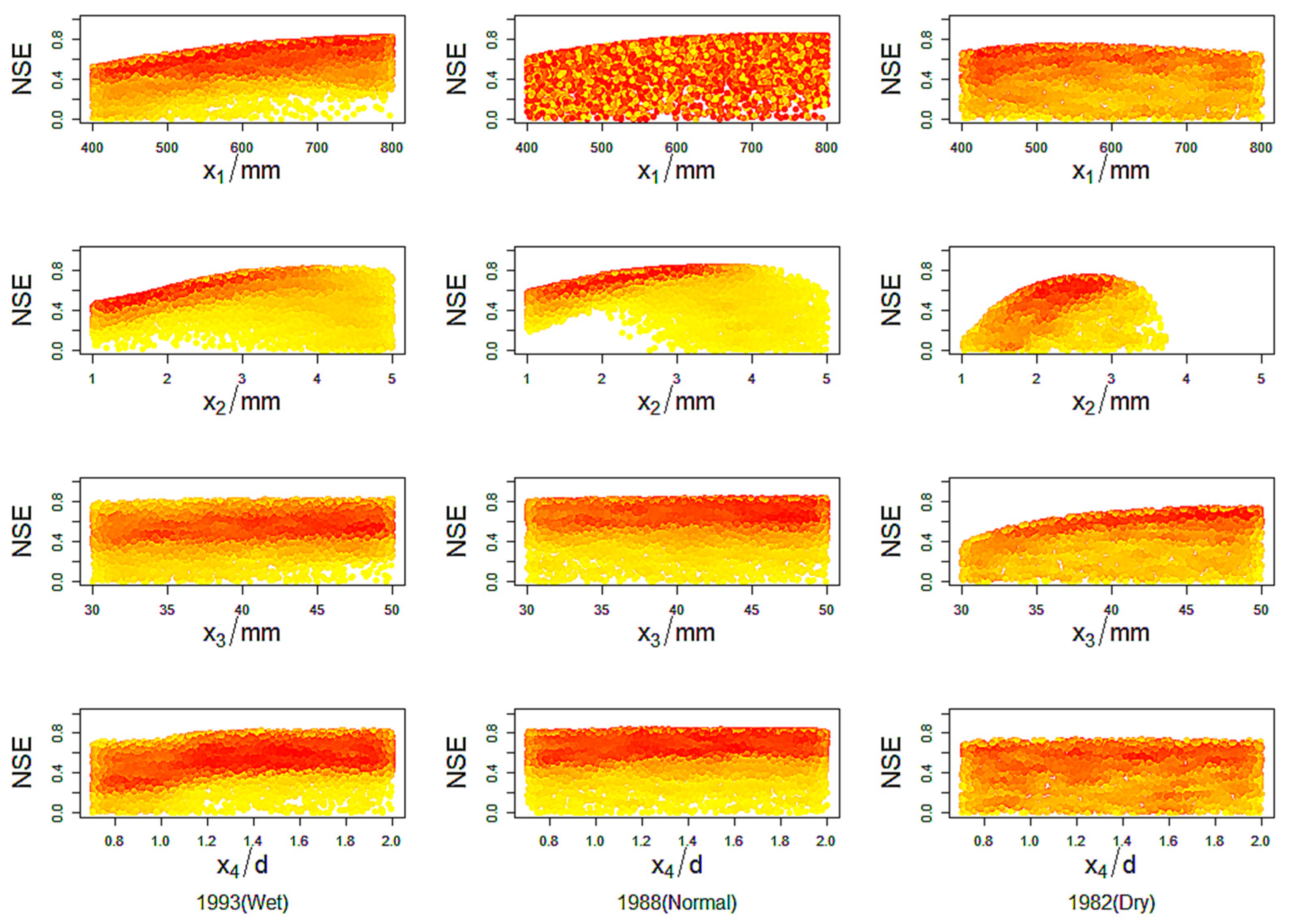 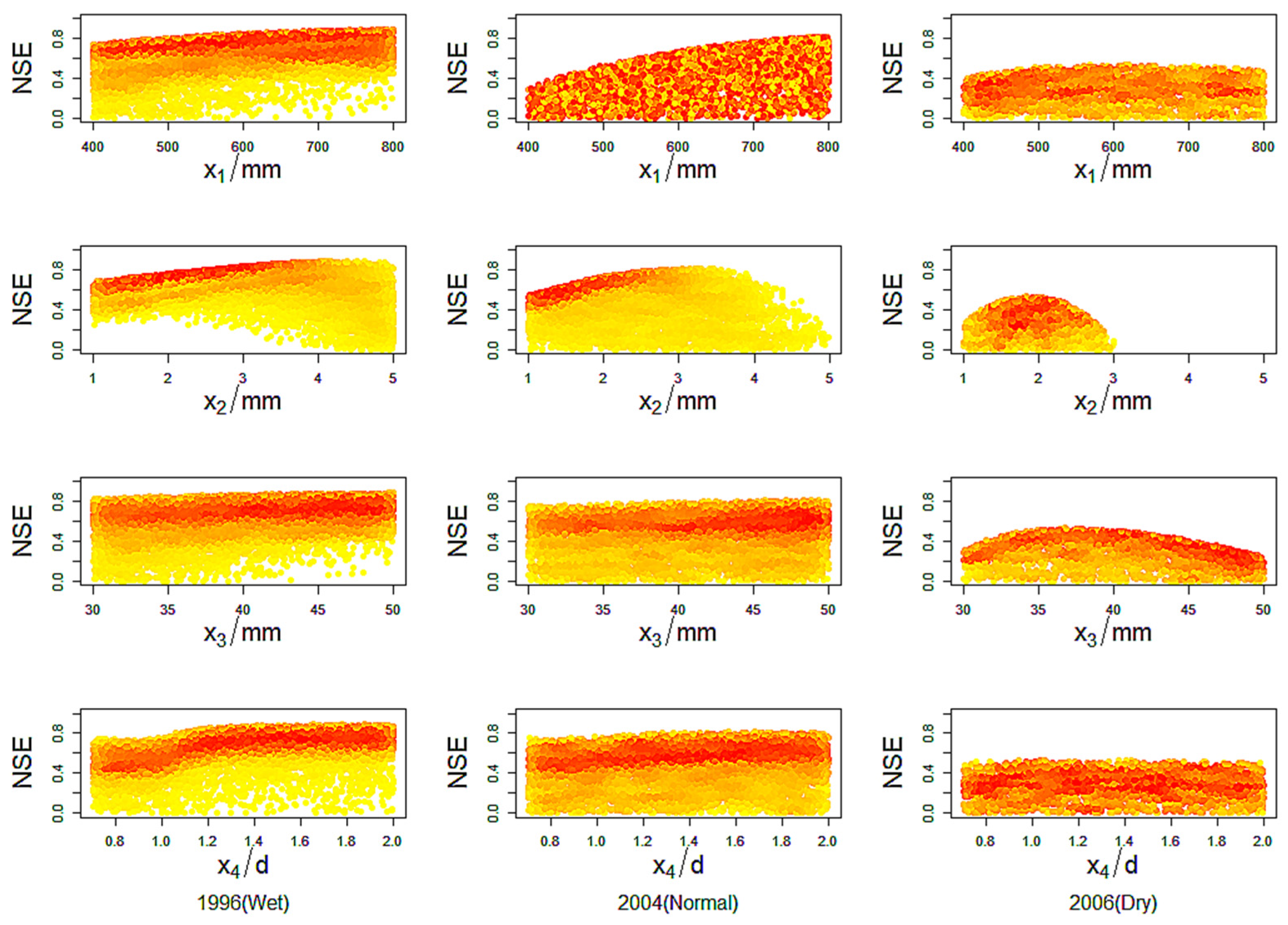 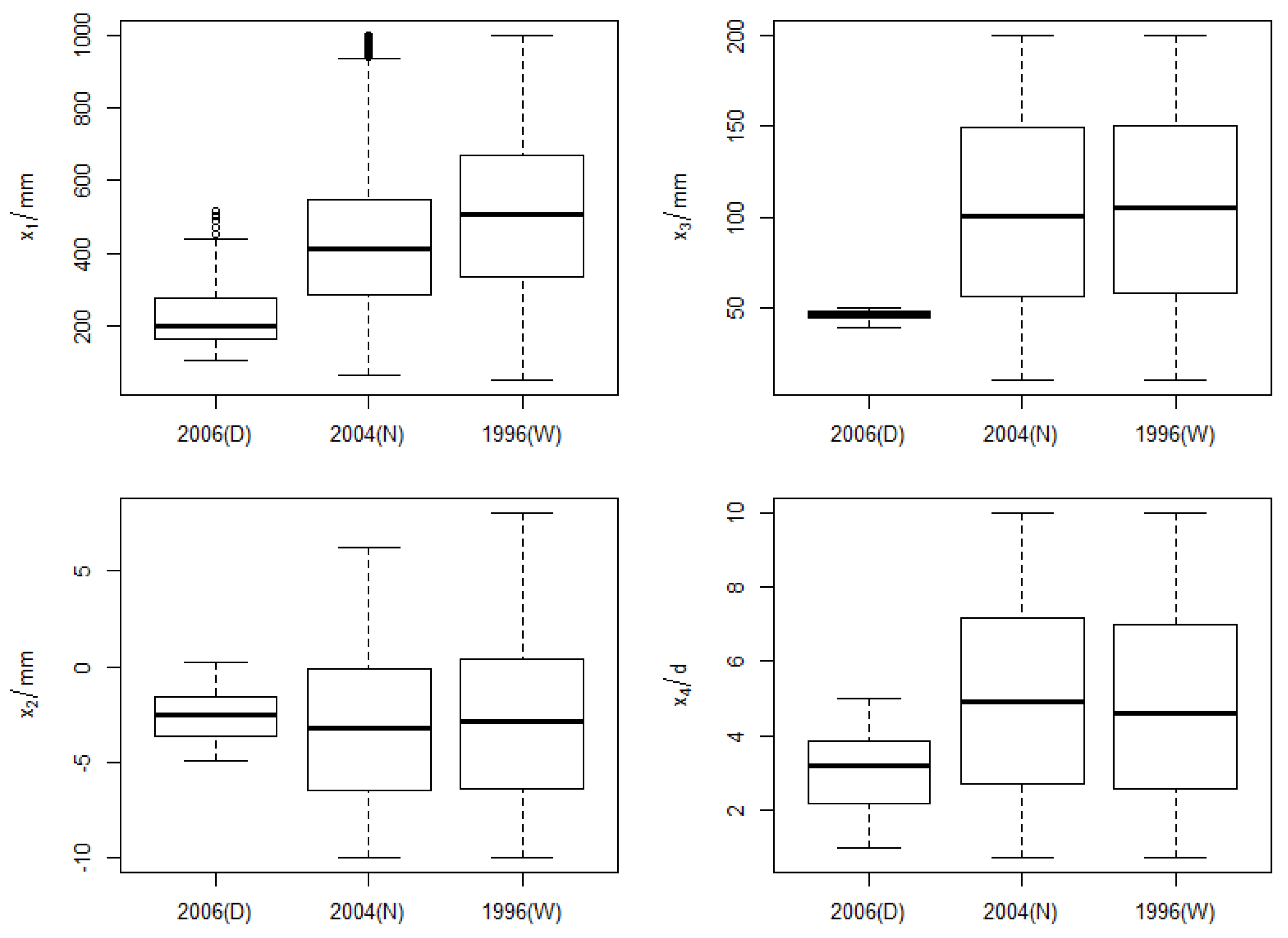