The Role of Modification of the Structure of Water and Water-Containing Systems in Changing Their Biological, Therapeutic, and Other Properties Overview
Next Article in Special Issue

Inland and Coastal Bathing Water Quality in the Last Decade (2011–2020): Croatia vs. Region vs. EU

Data on bathing water quality in EU Member States are taken from the publicly available official annual reports of the European Environment Agency (EEA) on inland and coastal bathing water quality in the EU [24]. Data for the non-EU countries, Montenegro [25,26], Bosnia and Herzegovina (only for the Federation of Bosnia and Herzegovina) [27] and Serbia [28], are from the publicly available official reports on bathing water quality at national or entity level.
In analyzing the results of the ten-year period, the ‘good’ and ‘sufficient’ categories were merged. This allowed comparability with the criteria of the previous Directive (76/160/EEC), for which the assessment dataset did not yet allow quality assessment against the criteria of BWD 2006/7/EC (which was monitored and reported in 2014 and before). The analysis of EU bathing water quality data also included bathing water quality data from the United Kingdom (UK) for 2020, taking into account that this was the transition period (pre-Brexit) when EU legislation was still in force in the United Kingdom as it was still a Member State.
Descriptive statistical methods (relative frequency, average), graphs and tables are used to present the results of this study.

In the 2020 season, bathing water quality in the EU was monitored at 22,276 bathing sites, two-thirds of which were coastal waters. Compared to 2011, this represents an increase of 5.9% (N2011 = 21,031). In general, water quality at coastal sites is better than at inland sites. Figure 13 shows the quality of bathing waters at inland and coastal sites in the period 2011–2020.
The 10-year average of the proportion of bathing waters with excellent quality shows that coastal bathing sites outperform inland bathing waters by 7.1%. The reason for the better microbiological quality of coastal bathing waters can be attributed to the higher natural self-purification capacity and higher salinity of the seawater. In addition, many inland bathing sites in the EU are located in smaller lakes and rivers with limited flow. This makes these sites very vulnerable to pollution, especially after heavy rainfall [38].
Considering that the BWD [1] prescribes stricter criteria for coastal bathing waters than for inland waters, this may seem surprising, especially if one assumes the better purification capacity of seawater. However, studies [40,41] have shown that the incidence of swimming-associated diseases is about five times higher in seawater than in freshwater. This is thought to be because fecal indicator bacteria die-off faster than pathogens in seawater compared to freshwater. At the same time, viruses die-off at a similar rate in both water bodies [42]. This means that at similar concentrations of fecal indicator bacteria, the concentration of pathogens in seawater is higher than in freshwater, which increases the health risk for bathers in seawater.

The data supporting the findings of this study are available within the article.

The authors would like to thank colleague Nemanja Malovrazić, Public Enterprise for Coastal Zone Management, Montenegro, for help with data collection. 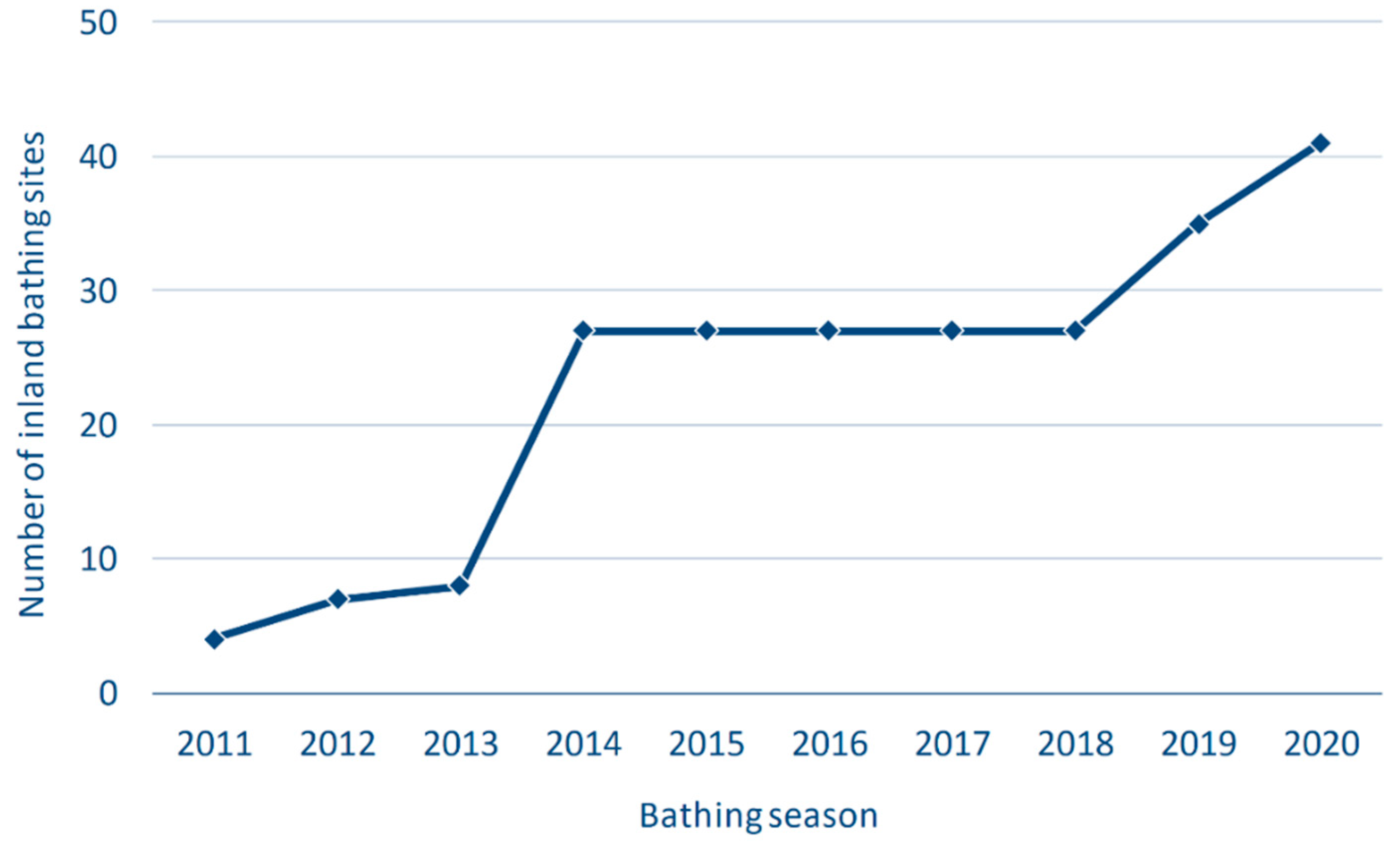 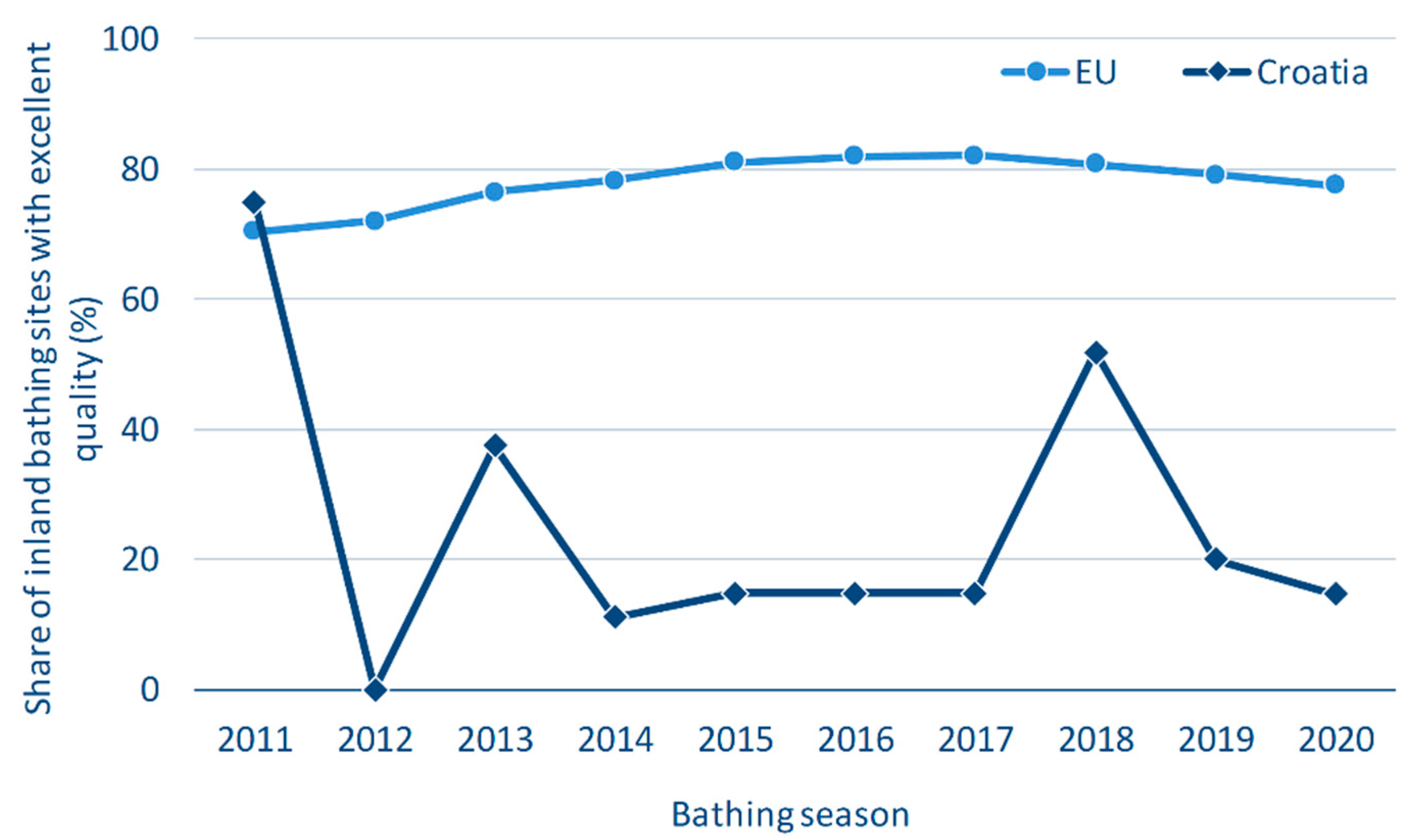 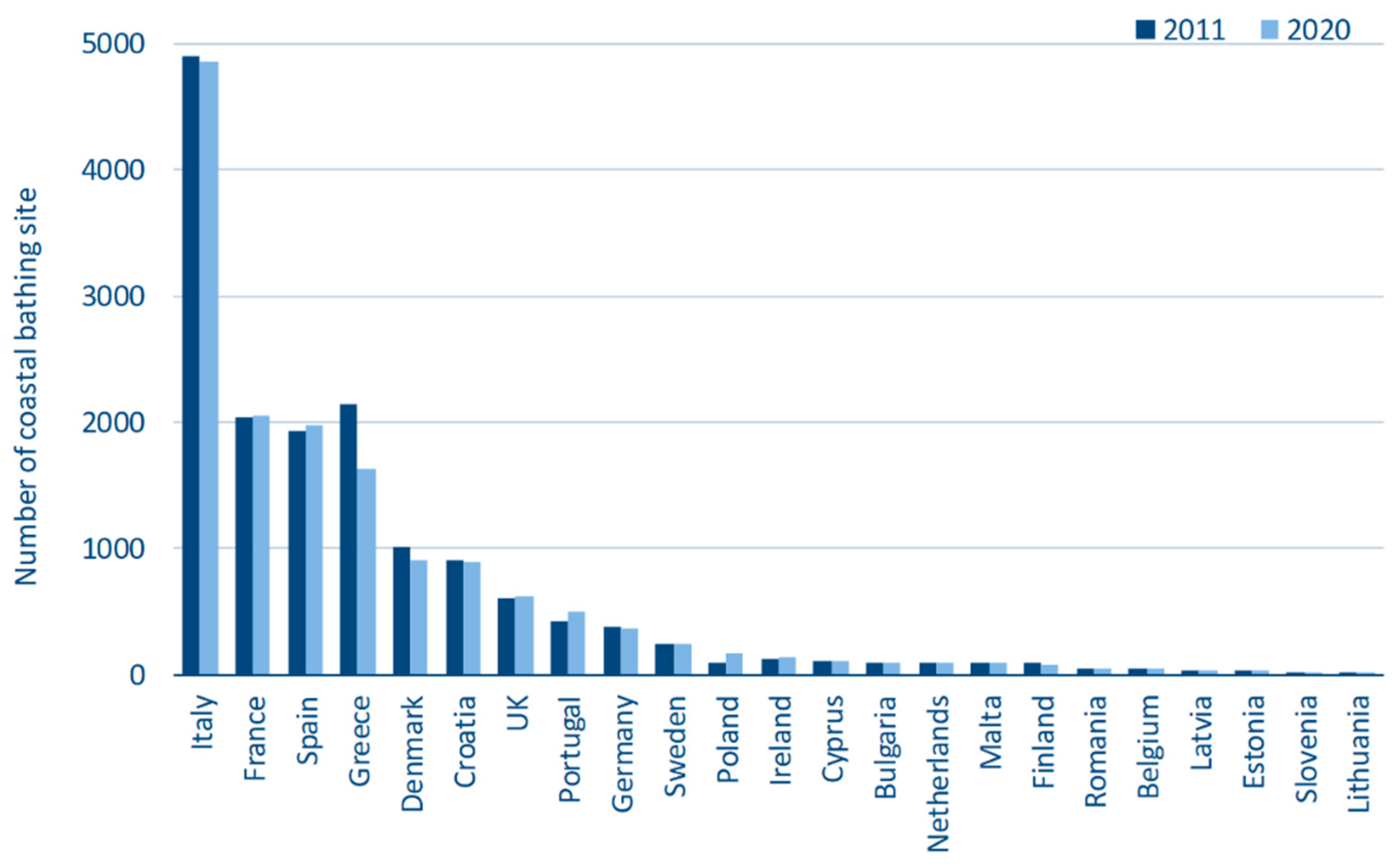 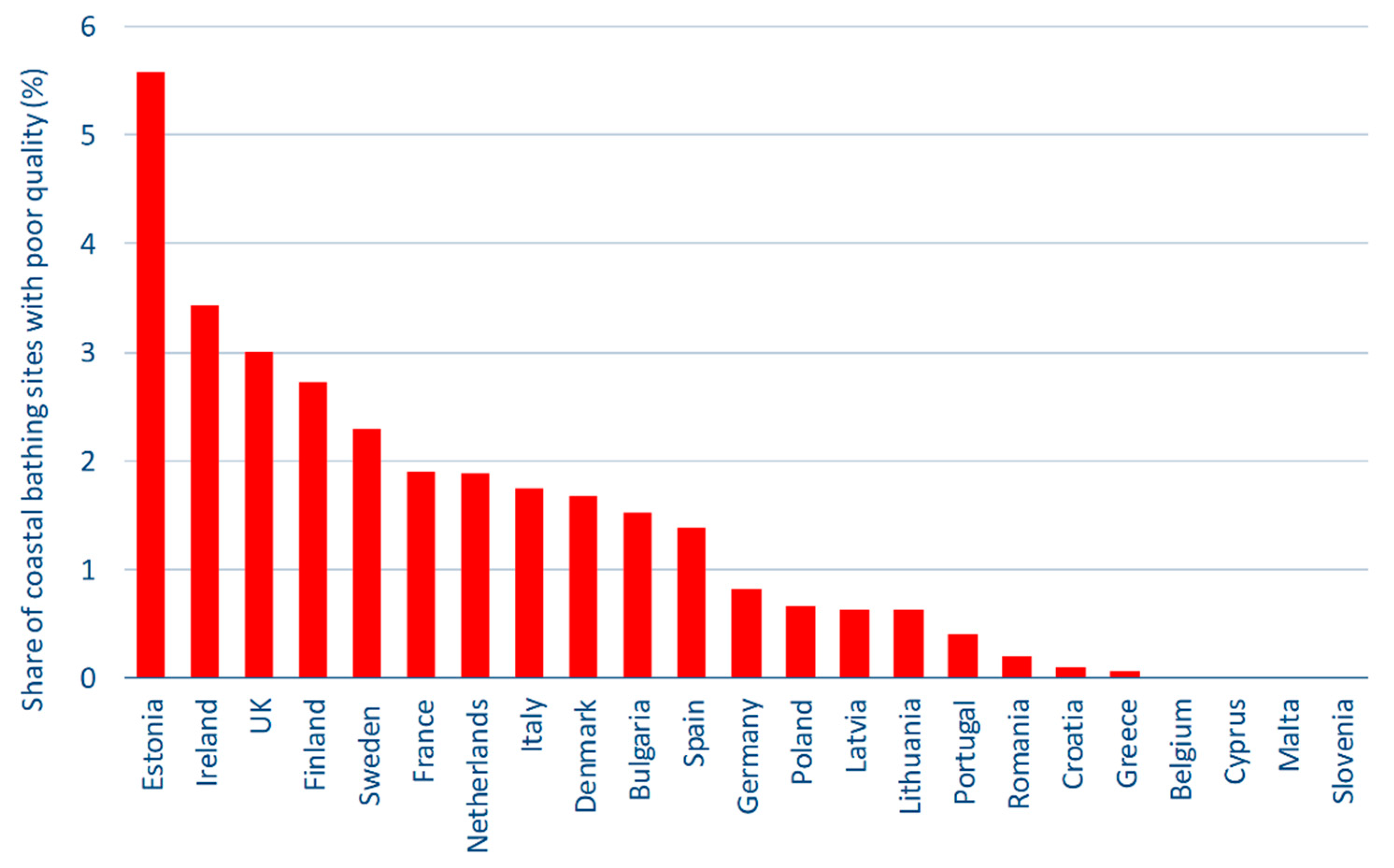 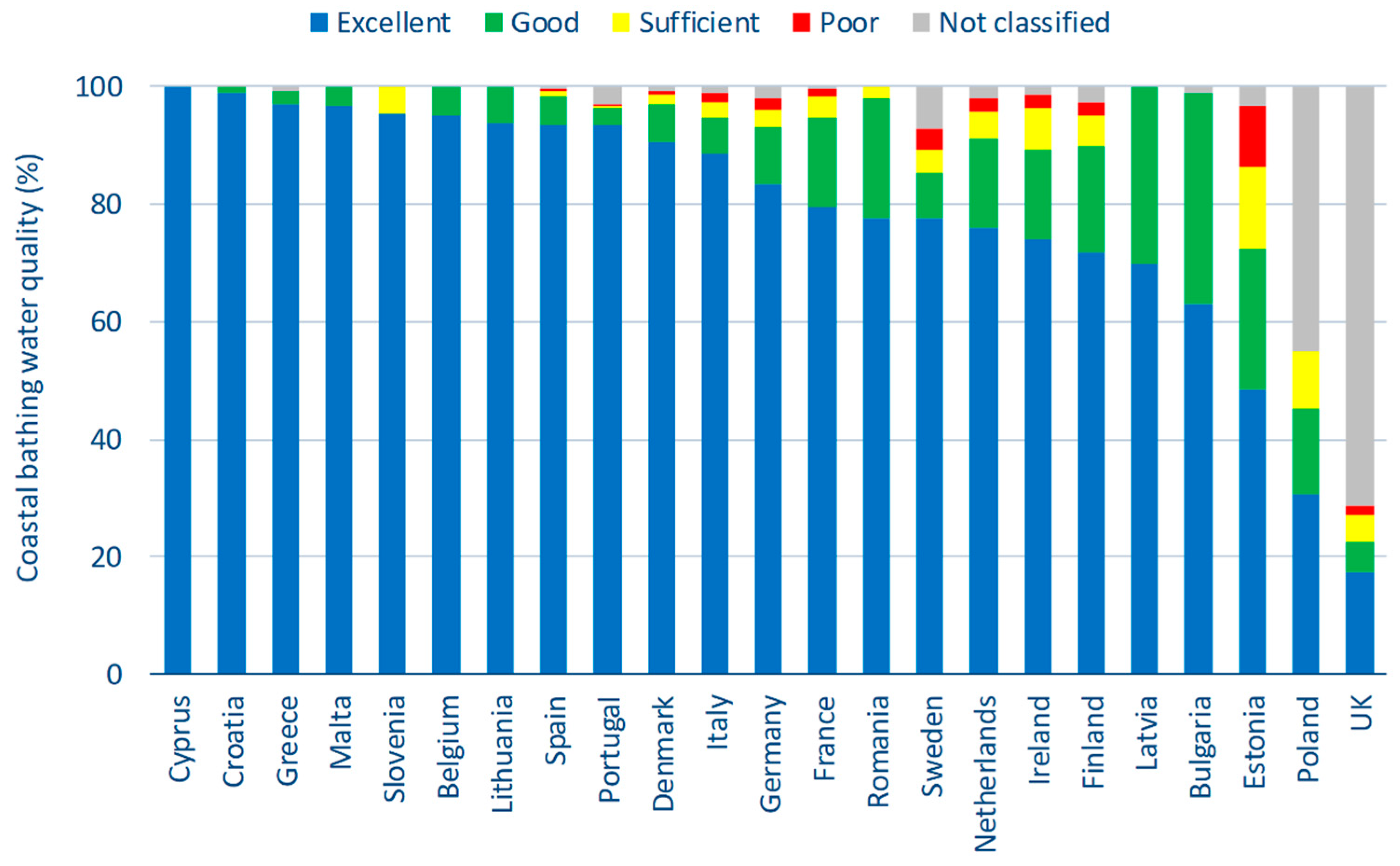 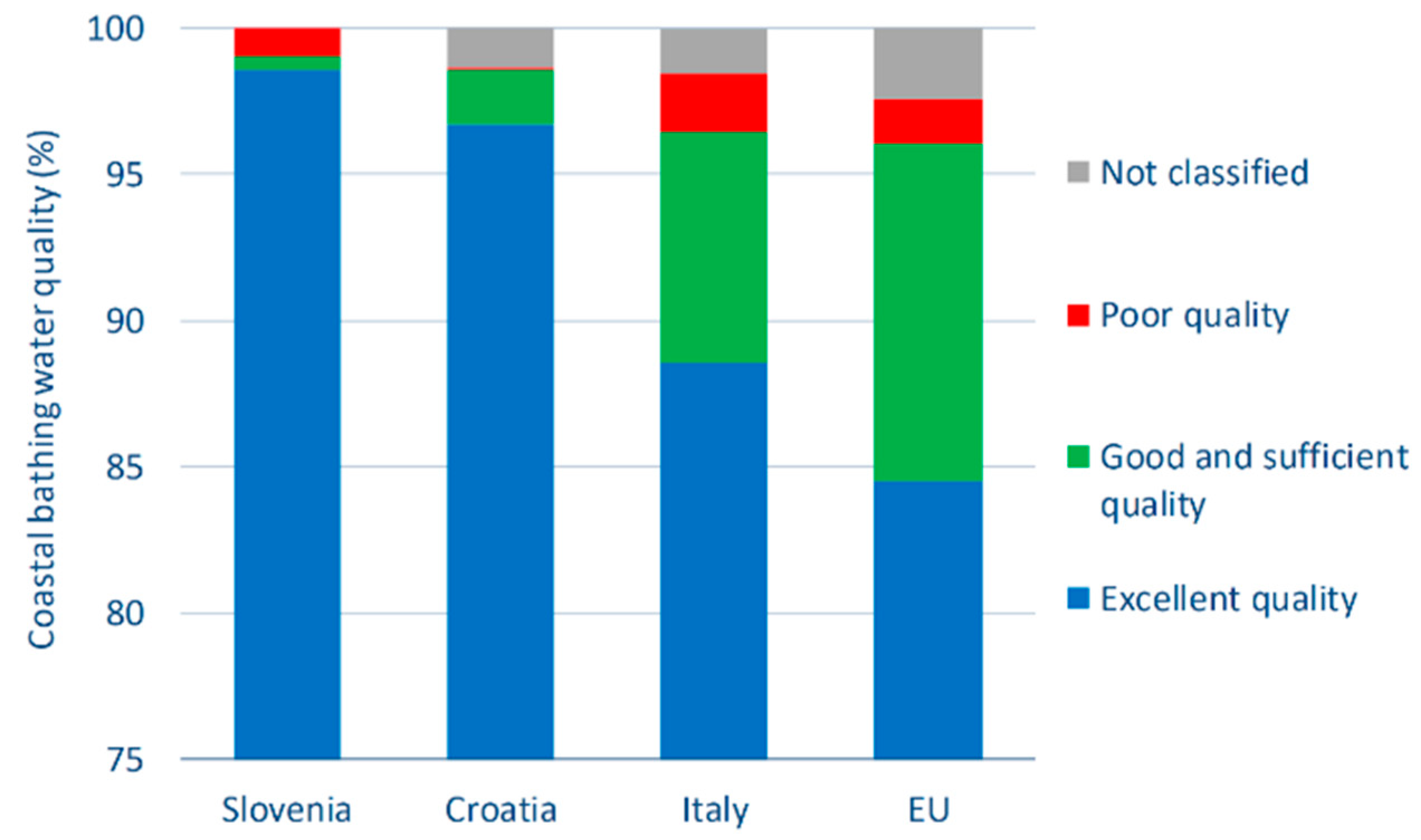 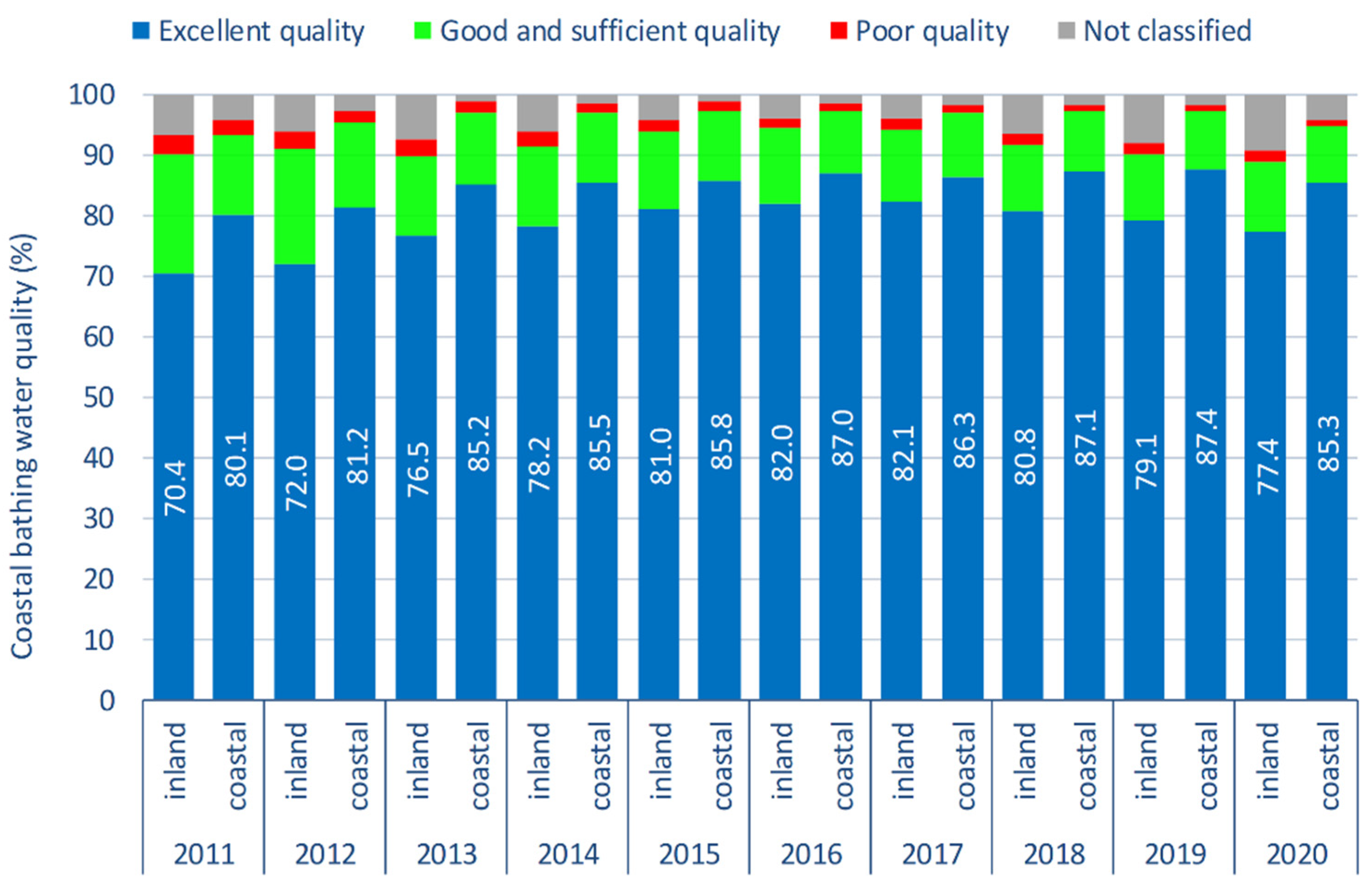