Hydrochemical Assessment of the Irrigation Water Quality of the El-Salam Canal, Egypt

Under the background of global climate change, drought is causing devastating impacts on the balance of the regional water resources system. Hydrological drought assessment is critical for drought prevention and water resources management. However, in China to assess hydrological drought at national scale is still challenging basically because of the difficulty of obtaining runoff data. In this study, we used the state-of-the-art passive microwave remote sensing techniques in river runoff modelling and thus assessed hydrological drought in Mainland China in 1996–2016. Specifically, 79 typical hydrological stations in 9 major basins were selected to simulate river runoff using the M/C signal method based on a high-resolution passive microwave bright temperature dataset. The standardized runoff index (SRI) was calculated for the spatial and temporal patterns of hydrological drought. Results show that passive microwave remote sensing can provide an effective way for runoff modelling as 92.4% and 59.5% of the selected 79 stations had the Pearson correlation coefficient (R) and the Nash-Sutcliffe efficiency coefficient (NS) scores greater than 0.5. Especially in areas located on Qinghai-Tibet Plateau in the Inland and the Southwest River Basin, the performance of the M/C signal method is quite outstanding. Further analysis indicates that stations with small rivers in the plateau areas with sparse vegetation tend to have better simulated results, which are usually located in drought-prone regions. Hydrological drought assessment shows that 30 out of the 79 stations present significant increasing trends in SRI-3 and 18 indicate significant decreasing trends. The duration and severity of droughts in the non-permanent dry areas of the Hai River Basin, the middle reaches of the Yangtze River Basin and the Southwest of China were found out to be more frequent and severe than other regions. This work can provide guidance for extending the applications of remote sensing data in drought assessment and other hydrological research. View Full-Text
Keywords: drought assessment; passive microwave remote sensing; brightness temperature; MEaSUREs CETB drought assessment; passive microwave remote sensing; brightness temperature; MEaSUREs CETB
►▼ Show Figures 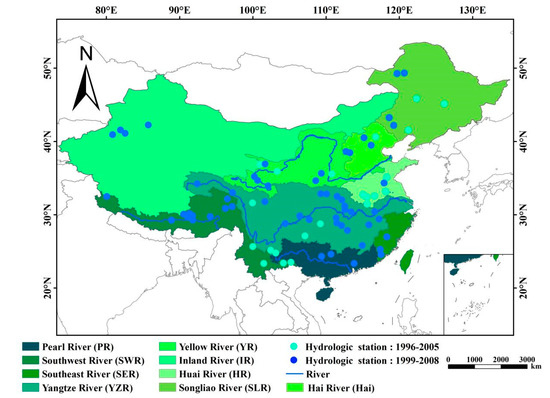