The World of Edges in Submerged Vegetated Marine Canopies: From Patch to Canopy Scale

Hydrochemical Assessment of the Irrigation Water Quality of the El-Salam Canal, Egypt

The El-Salam canal in Egypt is considered an important stream of fresh water for the agricultural sector that extends from the Nile River to Sinai, while it is subjected to several anthropogenic stresses. In this study, five-georeferenced stations (named from S1 to S5) were monitored along the El-Salam Canal before El-Sahara of the Suez Canal, via the estimation of the WQ index based on major cations and anions analysis including salinity hazard, permeability index, residual sodium carbonate, magnesium hazard, sodium percentage, sodium adsorption ratio, Kelley index, potential salinity, total hardness, and irrigation water quality index (IWQI). The sequence of average concentration of cations in water were Na+ > Ca2+ > Mg2+ > K+. The major cations constitute around 60% of the total dissolved salts. While the sequence of major anions in water were SO42− > HCO3− > Cl− > CO32−. These cations and anions showed an increasing trend from S1 (intake of the canal) to S5 (before El-Sahara) of the El-Salam Canal. Moreover, the order of heavy metals was Zn < Cd < Cr < Ni < Fe < Mn < Co < Cu < Pb. According to the US EPA (1999) guidelines, the levels of Fe and Zn in the El-Salam Canal are within the permissible limits for drinking and irrigation purposes, while Mn, Pb, Cu, Co, Ni, Cr, and Cd were detected at higher concentrations than those recommended. The value of IWQI in water samples varied from 40.26 to 114.82. The samples of S1 showed good water, the samples of region S2 (after mixing with Faraskour drainage) showed poor water quality, samples of regions S3 (after mixing with the El-Serw drain waters) and S5 (before El-Sahara) fell under the very poor water category and samples of region S4 (after mixing with the Hadous drainage) showed unsuitable water. Croplands irrigated with such water will not be exposed to any alkaline risks but will be exposed to the risk of salinity, which is more severe after mixing at the S3 and S4 sites. It is recommended to treat the drainage water before mixing with the irrigation water of El-Salam Canal to raise the suitability of irrigation water for crops, particularly for the Hadous drain. View Full-Text
Keywords: irrigation canal; wastewater; agriculture land; heavy metals; water quality indices irrigation canal; wastewater; agriculture land; heavy metals; water quality indices
►▼ Show Figures 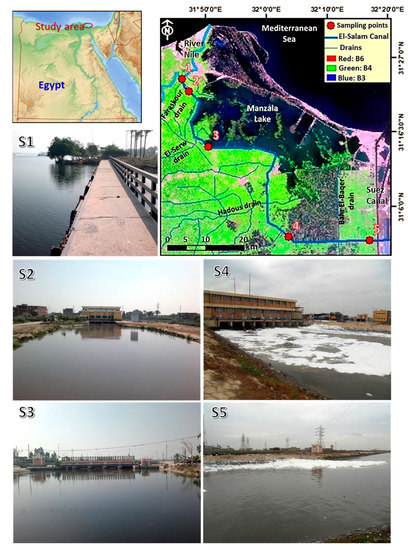