Geochemical and Isotope Characterisation of Thermo-Mineral Springs of Corsica Island: From Geological Complexity to Groundwater Singularity
Next Article in Special Issue

The overarching objective of this study was to evaluate the performance of nine precipitation-based and twelve temperature-based climatic indices derived from four regional climate models (CRCM5-UQUAM, CanRCM4, RCA4 and HIRHAM5) driven by three global circulation models (CanESM2, EC-EARTH and MPI-ESM-LR) and their ensemble mean for the reference period of 31 years (1975–2005). The absolute biases, pattern correlation, the reduction of variance (RV) and the Standardized Precipitation Evapotranspiration Index (SPEI at 3-, 6- and 12-month aggregate periods) techniques were used to evaluate the climate model simulations. The result, in general, shows each climate model has a skill in reproducing at least one of the climatic indices considered in this study. Based on the pattern correlation result, however, EC-EARTH.HIRHAM5 and MPI-ESM-LR.CRCM5-UQAM RCMs showed a relatively good skill in reproducing the observed climatic indices as compared to the other climate model simulations. EC-EARTH.RCA4, CanESM2.RCA4 and MPI-ESM-LR.CRCM5-UQAM RCMs showed a good skill when evaluated using the reduction of variance. The ensemble mean of the RCMs showed relatively better skill in reproducing the observed temperature-based climatic indices as compared to the precipitation-based climatic indices. There were no exceptional differences observed among the performance of the climate models compared to the SPEI, but CanESM2.CRCM5-UQAM, EC-EARTH.RCA4 and the ensemble mean of the RCMs performed relatively good in comparison to the other climate models. The good performance of some of the RCMs has good implications for their potential application for climate change impact studies and future trend analysis of extreme events. They could help in developing an early warning system to mitigate and prepare for possible future impacts of climate extremes (e.g., drought) and vulnerability to climate change across Florida. View Full-Text
Keywords: climate change; RCMs; climatic indices; performance evaluation climate change; RCMs; climatic indices; performance evaluation
►▼ Show Figures 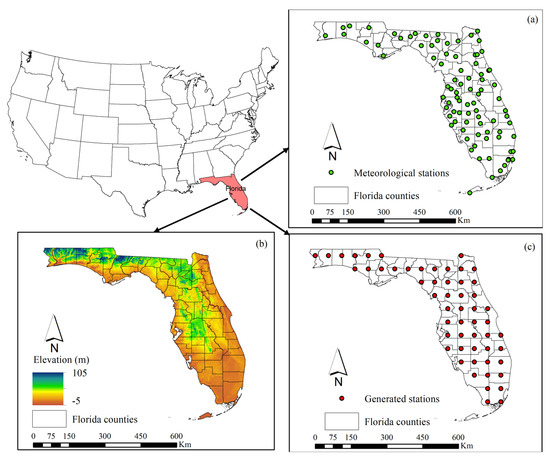