Microalgae cultivation in wastewater is an emerging approach to remove its contaminants and generate microalgal biomass. This study aimed to screen and isolate potential strains in a cassava biogas effluent wastewater (CBEW) treatment system and produce algal biomass. Chlorella sorokiniana strains P21 and WB1DG were isolated from CBEW and found to grow by utilizing various carbon sources. Experiments conducted in a batch reactor using an unsterilized substrate were done to evaluate the nutrient removal and growth of isolated strains from CBEW. The results showed that C. sorokiniana P21 and WB1DG could achieve biomass accumulation of more than 2564 and 1301 mg L−1, respectively. The removal efficiencies of chemical oxygen demand (COD), total phosphorous (TP), and total inorganic nitrogen (TIN) were found up to be 63.42, 91.68, and 70.66%, respectively, in a WB1DG culture and 73.78, 92.11, and 67.33%, respectively, in a P21 culture. Harvestability of the P21 strain was examined using several coagulant–flocculants. FeCl3 was found to remove more than 90% of the cells. Nutrient removal and growth rates resulting from these indigenous strains with application of untreated CBEW support the possibility of this strain being a promising candidate to couple a CBEW treatment and algal biomass generation with minimal process adjustment. View Full-Text
Keywords: microalgae; biogas wastewater; nitrogen; phosphorus; COD; harvestability microalgae; biogas wastewater; nitrogen; phosphorus; COD; harvestability
►▼ Show Figures 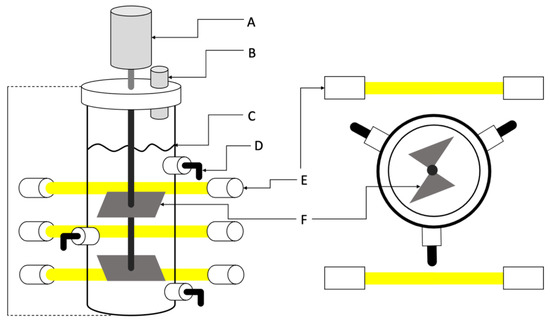