Assessment of Heavy Metal Pollution Levels in Sediments and of Ecological Risk by Quality Indices, Applying a Case Study: The Lower Danube River, Romania
Next Article in Special Issue

Measures to Cope with the Impact of Climate Change and Drought in the Island Region: A Study of the Water Literacy Awareness, Attitude, and Behavior of the Taiwanese Public
Previous Article in Special Issue

Double Trouble: Synergy between Habitat Loss and the Spread of the Alien Species Caulerpa cylindracea (Sonder) in Three Mediterranean Habitats

The introduction of non-native fish species is known to have adverse effects on aquatic ecosystems, but their effect on plateau lakes is not well studied. In this study, we examined the effect of the Japanese smelt (Hypomesus nipponensis) invasion on the fish assemblage in Lake Erhai, a subtropical plateau lake in southwestern China. Through cluster analysis and non-metric multidimensional scaling (NMDS), we found a significant fish assemblage shift: the population of sharpbelly (Hemiculter leucisculus) fell by 67% in catch per unit effort (CPUE) from 2.262 to 0.741; topmouth gudgeon (Pseudorasbora parva) fell by 52% from 0.61 to 0.29; and icefish (Neosalanx taihuensis) plummeted by 88% from 0.736 to 0.088. Meanwhile, the numbers for crucian carp (Carassius auratus) improved by almost 185% from 1.82 to 3.36. A Pearson correlation analysis showed that these four species significantly correlated with the invasion of the Japanese smelt: sharpbelly (−0.71), topmouth gudgeon (−0.71), icefish (−0.62), and crucian carp (0.81). This study documented the expansion of invasive fish and their effects on native species over time, thus providing a case study of invasive fish as well as a theoretical basis for further research into interspecies interactions. View Full-Text
Keywords: invasive fish; fish community; population; CPUE; Japanese smelt invasive fish; fish community; population; CPUE; Japanese smelt
►▼ Show Figures 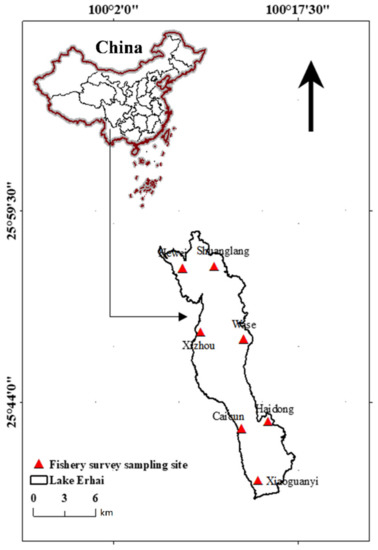