Depression is a serious health issue and, being such, treatment for it has become a topic of increasing concern. Consequently, the prescription rates of antidepressants have increased by about 50% over the past decade. Among antidepressants, citalopram and venlafaxine are the most frequently prescribed in Germany. Due to the high consumption and low elimination rates of both antidepressants during wastewater purification, they are frequently found in surface waters, where they may pose a risk to the aquatic environment. For the present study, we conducted experiments with the big ramshorn snail, which we exposed to environmentally relevant and explicitly higher concentrations (1–1000 µg/L) of the antidepressants citalopram and venlafaxine. We investigated apical endpoints, such as weight, mortality, behavioural changes, B-esterase activity, Hsp70 stress protein level and superoxide dismutase activity, as well as the tissue integrity of the hepatopancreas in the exposed snails. Citalopram and venlafaxine had no effects on the B-esterase activity, Hsp70 level and superoxide dismutase activity. Citalopram exposure resulted in weight reduction and tissue reactions in the hepatopancreas of snails exposed to 1000 µg/L. In contrast, venlafaxine did not induce comparable effects, but impacted the behaviour (sole detachment) of snails exposed to 100 µg/L and 1000 µg/L of the antidepressant. These results revealed that venlafaxine can affect snails at concentrations 10 times lower than citalopram. For this, in 2020 venlafaxine was introduced in the “Surface Water Watch List”, a list of potential pollutants that should be carefully monitored in surface water by the EU Member States. View Full-Text
Keywords: antidepressant; citalopram; venlafaxine; big ramshorn snail; histopathology; behaviour; acetylcholinesterase; superoxide dismutase antidepressant; citalopram; venlafaxine; big ramshorn snail; histopathology; behaviour; acetylcholinesterase; superoxide dismutase
►▼ Show Figures 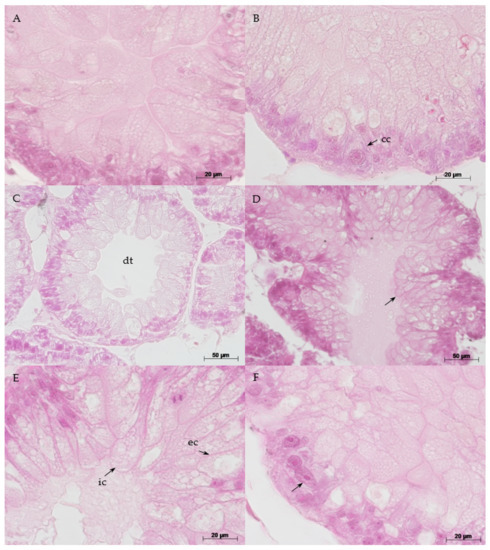