Physiological Responses of the Submerged Macrophyte Stuckenia pectinata to High Salinity and Irradiance Stress to Assess Eutrophication Management and Climatic Effects: An Integrative Approach
Next Article in Special Issue

Assessing the Impact of Lining Polluted Streams on Groundwater Quality: A Case Study of the Eastern Nile Delta Aquifer, Egypt

Groundwater is considered to be an important water supply for domestics, industry, and irrigation in many areas of the world. Renewable groundwater is recharged by rainfall and seepage from canals and open drain networks. Agricultural and industrial drainage, as well as domestic drainage, represent the main discharges into open drains. Therefore, these drains are considered to be a source of recharge as well as a source of pollution. In this study, we aim to evaluate the impact of the Bahr El Baqar drain system on groundwater quality in the Eastern Nile Delta, Egypt. MODFLOW was used to create a numerical model to simulate groundwater flow in an aquifer and MT3DS was used to simulate solute transport from the open contaminated Bahr El Baqar drain to the groundwater. Two approaches were developed in the study area. The first approach was applied to investigate the impact of increasing the abstraction rates on the contaminant transport into the aquifer, the second approach was developed to identify the effect of lining the drain using different materials on contaminant extension in the aquifer to protect groundwater quality in the east Nile Delta Aquifer. The results showed that the TDS values increased by 18.23%, 23.29%, and 19.24% with increased abstraction rates of 15%, 34%, and 70%, resulting from population increases in 2010, 2025, and 2040, respectively; however, the TDS in the aquifer decreased from 0.6%, to 6.36%, 88.35%, and 90.47% by using lining materials. View Full-Text
Keywords: groundwater; contamination; open drains; protection; MODFLOW groundwater; contamination; open drains; protection; MODFLOW
►▼ Show Figures 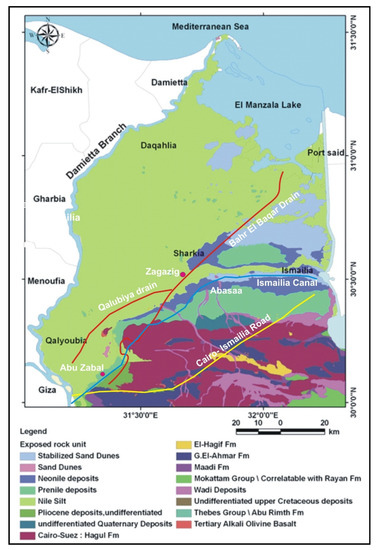