Seasonal Variability of Snow Density in the Spanish Pyrenees

Nitrification Process in a Nuclear Wastewater with High Load of Nitrogen, Uranium and Organic Matter under ORP Controlled

To produce nuclear fuels, it is necessary to convert uranium′s ore into UO2-ceramic grade, using several quantities of kerosene, methanol, nitric acid, ammonia, and, in low level, tributyl phosphate (TBP). Thus, the effluent generated by nuclear industries is one of the most toxic since it contains high concentrations of dangerous compounds. This paper explores biological parameters on real nuclear wastewater by the Monod model in an ORP controlled predicting the specific ammonia oxidation. Thermodynamic parameters were established using the Nernst equation to monitor Oxiders/Reductors relationship to obtain a correlation of these parameters to controlling and monitoring; that would allow technical operators to have better control of the nitrification process. The real nuclear effluent is formed by a mixture of two different lines of discharges, one composed of a high load of nitrogen, around 11,000 mg/L (N-NH4+-N-NO3−) and 600 mg/L Uranium, a second one, proceeds from uranium purification, containing TBP and COD that have to be removed. Bioprocesses were operated on real wastewater samples over 120 days under controlled ORP, as described by Nernst equations, which proved to be a robust tool to operate nitrification for larger periods with a very high load of nitrogen, uranium, and COD. View Full-Text
Keywords: thermodynamic parameters; nitrifying bacteria; bioprocess; nuclear effluent thermodynamic parameters; nitrifying bacteria; bioprocess; nuclear effluent
►▼ Show Figures 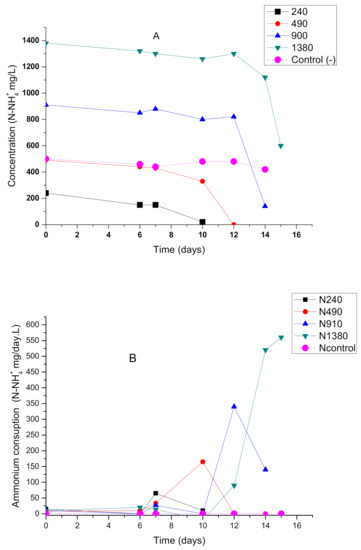